WASHINGTON (AP) — President Donald Trump chose Brett Kavanaugh, a politically connected conservative judge, for the Supreme Court Monday night, setting up a ferocious confirmation battle with Democrats as he seeks to shift the nation's highest court further to the right.

A favorite of the Republican legal establishment in Washington, Kavanaugh, 53, is a former law clerk for retiring Justice Anthony Kennedy. Like Trump's first nominee last year, Justice Neil Gorsuch, Kavanaugh would be a young addition who could help remake the court for decades to come with rulings that could restrict abortion, expand gun rights and roll back key parts of Obamacare.

"There is no one in America more qualified for this position and no one more deserving," said Trump in his prime-time televised address from the White House, calling Kavanaugh "one of the sharpest legal minds of our time."

With Kavanaugh, Trump is replacing a swing vote on the nine-member court with a staunch conservative. Kavanaugh, who serves on the Court of Appeals for the D.C. Circuit, is expected to be less receptive to abortion and gay rights than Kennedy was. He also has taken an expansive view of executive power and has favored limits on investigating the president.

On Monday, Trump phoned retiring Justice Kennedy to inform him that his former law clerk would be nominated to fill his seat. Trump signed Kavanaugh's nomination papers Monday evening in the White House residence.

Some conservatives have expressed concerns about Kavanaugh, questioning his commitment to social issues like abortion and noting his time serving under President George W. Bush as evidence he is a more establishment choice. But his supporters have cited his experience and wide range of legal opinions.

With Democrats determined to vigorously oppose Trump's choice, the Senate confirmation battle is expected to dominate the months leading up to November's midterm elections. Senate Republicans hold only a 51-49 majority, leaving them hardly any margin if Democrats hold the line. Democratic senators running for re-election in states Trump carried in 2016 will face pressure to back his nominee.

Senate Majority Leader Mitch McConnell called Kavanaugh "a superb choice" and said senators would start meeting with him this week.

Some Republican senators had favored other options. Rand Paul of Kentucky had expressed concerns but tweeted that he looked forward to meeting with Kavanaugh "with an open mind."

Democrats and liberal advocacy groups quickly lined up in opposition.

Signaling the fight ahead on abortion rights, Dawn Laguens, executive vice president of Planned Parenthood Federation of America, said in a statement: "There's no way to sugarcoat it: With this nomination, the constitutional right to access safe, legal abortion in this country is on the line." 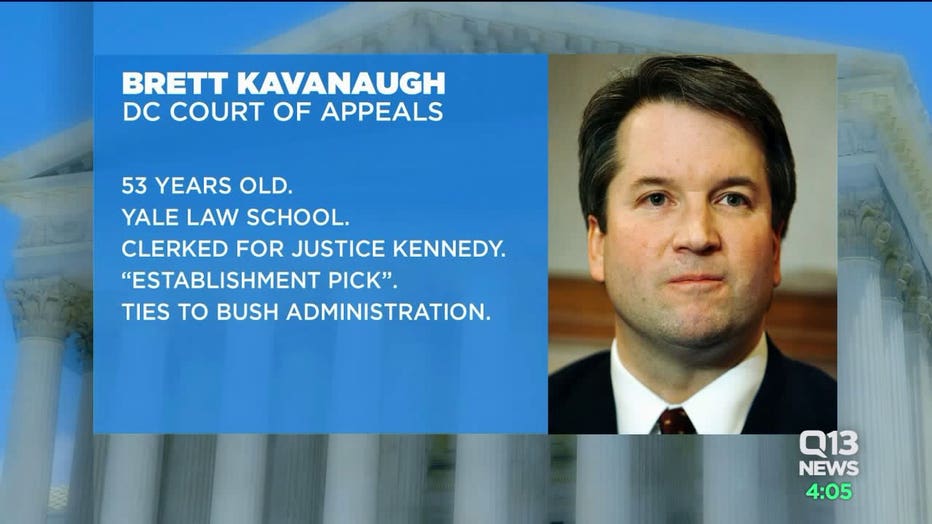 The White House invited a number of senators to attend the Monday night announcement. Democrats who were invited but declined included Sens. Joe Donnelly of Indiana, Heidi Heitkamp of North Dakota, Doug Jones of Alabama, Joe Manchin of West Virginia and Dianne Feinstein of California. Feinstein is the ranking Democrat on the Judiciary Committee. The others are Republican targets for the confirmation vote who come from Trump-won states where they face re-election this fall.

Democrats have turned their attention to pressuring two Republicans, Sens. Susan Collins of Maine and Lisa Murkowski of Alaska, to oppose any nominee who threatens Roe v. Wade. The two have supported access to abortion services.

Kavanaugh is likely to be more conservative than Justice Kennedy on a range of social issues. At the top of that list is abortion. A more conservative majority could be more willing to uphold state restrictions on abortion, if not overturn the 45-year-old landmark Roe v. Wade decision that established a woman's constitutional right.

Kennedy's replacement also could be more willing to allow states to carry out executions and could support undoing earlier court holdings in the areas of racial discrimination in housing and the workplace. Kennedy provided a decisive vote in 2015 on an important fair housing case.

Like the other eight justices on the court, Kavanaugh has an Ivy League law degree, spending his undergraduate and law school years at Yale. Since 2006, he has been a judge on the federal appeals court in Washington. He also was a key aide to Kenneth Starr during Starr's investigation of President Bill Clinton, worked on behalf of George W. Bush's campaign during the election recount in 2000 and served in the Bush White House.

Kavanaugh's many written opinions provide insight into his thinking and also will be fodder for Senate Democrats who will seek to block his confirmation. He has written roughly 300 opinions as a judge, authored several law journal articles, regularly taught law school classes and spoken frequently in public.

Kavanaugh's views on presidential power and abortion are expected to draw particular attention in his confirmation hearing. Drawing on his experience working on the Clinton investigation and then in the Bush White House, he wrote in a 2009 law review article that he favored exempting presidents from facing both civil suits and criminal investigations, including indictment, while in office. That view has particular relevance as special counsel Robert Mueller is looking into Russian meddling in the 2016 election and whether the Trump campaign played any role in a foreign interference plot.

On abortion, Kavanaugh voted in October to delay an abortion for a teenage immigrant who was in government custody. The court's ruling in her favor was based on a constitutional principle, he wrote, "as novel as it is wrong: a new right for unlawful immigrant minors in U.S. Government detention to obtain immediate abortion on demand."

Trump's success in confirming conservative judges, as well as a Supreme Court justice, has cheered Republicans amid concerns about his limited policy achievements and chaotic management style. Of the court's liberal justices, Ruth Bader Ginsburg is 85 and Stephen Breyer turns 80 next month, so Trump may well get another opportunity to cement conservative dominance of the court for years to come.