CORPUS CHRISTI, Texas  — Eager to show he's on the job and taking action, President Donald Trump offered upbeat reassurances Tuesday to Texans who felt the wrath of Harvey, promising local residents, "We are going to get you back and operating immediately."

Starting his visit to Texas in wind-whipped but sunny Corpus Christi, Trump's motorcade passed broken trees, knocked-down signs and fences askew as it made its way to a firehouse for a briefing with local officials.

"This was of epic proportion," the president declared as he pledged to provide model recovery assistance. "We want to do it better than ever before. We want to be looked at in five years, in 10 years from now as, 'This is the way to do it.'"

Afterward, Trump stood on a ladder between two fire trucks and spoke to a crowd of hundreds of people gathered outside. 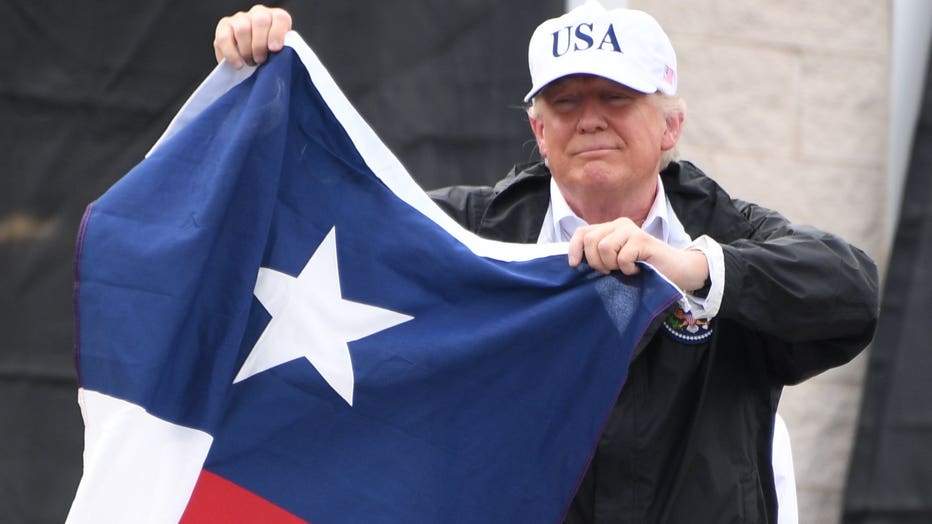 "What a crowd. What a turnout," Trump said, thanking Texas Gov. Greg Abbott and Sens. Ted Cruz and John Cornyn. "This is historic. It's epic what happened, but you know what, it happened in Texas, and Texas can handle anything."

Trump's optimistic reassurances stood in contrast to the more measured assessments coming from emergency management officials, who are cautioning about a long, difficult road ahead.

Brock Long, head of the Federal Emergency Management Agency, who appeared with Trump, warned, "This recovery is going to be frustrating."

"Recovery is a slow process but rest assured we're doing everything we can," Long said.

Trump drew cheers as he waved a Texas flag before the Corpus Christi crowd. He told the residents they were "special" and "we love you," but didn't directly reference those who had died or were displaced by the storm's fury.

White House press secretary Sarah Huckabee Sanders told reporters traveling with Trump that his visit was focused on coordination among different levels of government and laying the groundwork for what is expected to be a lengthy recovery effort.

"The president wants to be very cautious about making sure that any activity doesn't disrupt the recovery efforts that are still ongoing," she said aboard Air Force One shortly before it touched down in Corpus Christi.

Trump traveled with first lady Melania Trump and Cabinet secretaries who will play key roles in the recovery.

The president, who wore a black rain slicker with the presidential seal on his chest and a white cap that said "USA," was briefed in Corpus Christi on relief efforts. He later flew to meet with state officials at the emergency operations center in Austin. Mrs. Trump, who traded in her usual stiletto heels for a pair of white sneakers, wore a black baseball cap that read "FLOTUS," an acronym for "first lady of the United States."

The Cabinet secretaries were to meet with their Texas counterparts during Trump's visit.

Trump has embraced the role of guiding the nation's response to Harvey, which made landfall along the Gulf Coast on Friday night as a Category 4 storm near Corpus Christi, and moved northeast along the Texas coast over Houston. The storm has dumped more than 30 inches of rain in parts of Texas and authorities have rescued thousands of people left stranded by the storm.

Trump's vow of swift action on billions of dollars in disaster aid is at odds with his proposed budget, which would eliminate the program that helps Americans without flood insurance rebuild their homes and cut grants to states that would allow them to take long-term steps to reduce the risk of flooding before disaster strikes.

Trump's budget for 2018 zeroes out the Community Development Block Grants, a key program that helped the Gulf Coast rebuild after Hurricane Katrina and helped New York and New Jersey come back from Superstorm Sandy. In the 2017 budget, the Republican-led Congress restored some of the block grant money.

All told, Trump proposed cutting such grant programs by about $900 million.

Trump saw a largely functioning Corpus Christi, a city of 325,000, where damage was minimal. Power has largely been restored, particularly in commercial areas. Some restaurants have reopened and stores are restocked. Hotels are jammed with evacuees from hard-hit areas to its northeast, including Houston. Residents have been advised to boil drinking water because authorities cannot guarantee the integrity of the city's lead and steel water system.