Pelosi on Trump meeting: We witnessed a meltdown

Pelosi on Trump meeting: We witnessed a meltdown

WASHINGTON — Washing his hands of Syria, President Donald Trump declared Wednesday the U.S. has no stake in defending the Kurdish fighters who died by the thousands as America's partners against IS extremists. Hours later, House Speaker Nancy Pelosi and other top Democrats walked out of a meeting at the White House, accusing him of having a "meltdown," calling her a "third-rate politician" and having no plan to deal with a potentially revived Islamic State group.

Condemnation of Trump's stance on Turkey, Syria and the Kurds was quick and severe during the day, not only from Democrats but from Republicans who have been staunch supporters on virtually all issues.

The House, bitterly divided over the Trump impeachment inquiry, banded together for an overwhelming 354-60 denunciation of the U.S. troop withdrawal. Many lawmakers expressed worry that it may lead to revival of IS as well as Russian presence and influence in the area — in addition to the slaughter of many Kurds.

At the White House, Trump said the U.S. has no business in the region — and not to worry about the Kurdish fighters.

After the House condemnation vote, the congressional leaders of both parties went to the White House for a briefing, which grew contentious, with Trump and Pelosi trading jabs. The Democrats said they walked out when the meeting devolved into an insult-fest. 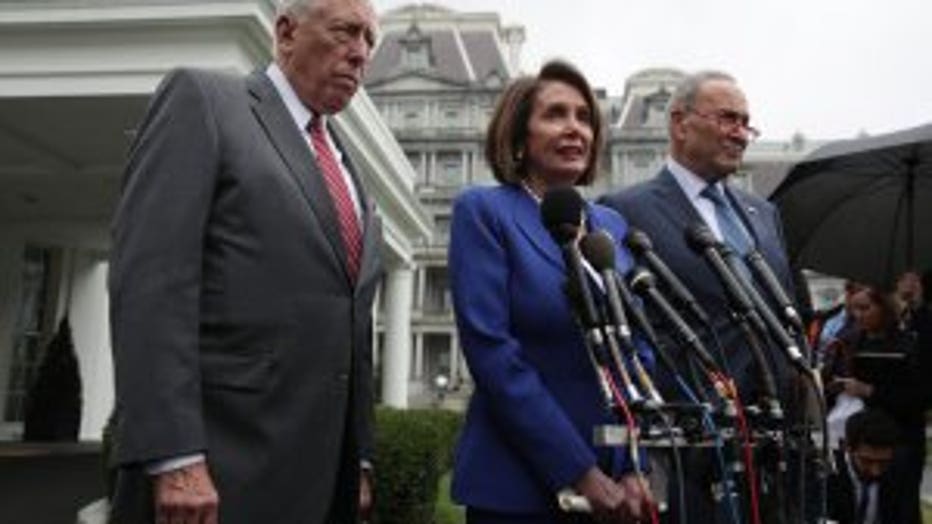 "What we witnessed on the part of the president was a meltdown," Pelosi told reporters, saying Trump appeared visibly "shaken up" over the House vote.

"We couldn't continue in the meeting because he was just not relating to the reality of it," she said.

Senate Democratic Leader Chuck Schumer criticized Trump for not having an adequate plan to deal with IS fighters who have been held by the Kurds. He said the meeting "was not a dialogue, this was sort of a diatribe, a nasty diatribe not focused on the facts."

Republicans pushed back, saying it was Pelosi who'd been the problem.

"She storms out of another meeting, trying to make it unproductive," said House GOP leader Kevin McCarthy.

White House spokeswoman Stephanie Grisham called Pelosi's action "baffling but not surprising." She said the speaker "had no intention of listening or contributing to an important meeting on national security issues."

Trump himself has stalked out of his White House meetings with congressional leaders — in May, saying he would no longer work with Democrats unless they dropped all Russia investigations, and last January during the partial government shutdown.

Separately on Wednesday, a letter was disclosed in which he both cajoled and threatened Turkish President Recep Tayyip Erdogan last week, urging him to act only in "the right and humane way" in Syria.

He started on a positive note, suggesting they "work out a good deal," but then talked about crippling economic sanctions and concluded that the world "will look upon you forever as the devil if good things don't happen. Don't be a tough guy. Don't be a fool!"

In public appearances Wednesday, Trump said he was fulfilling a campaign promise to bring U.S. troops home from "endless wars" in the Middle East -- casting aside criticism that a sudden U.S. withdrawal from Syria betrays the Kurdish fighters, stains U.S. credibility around the world and opens an important region to Russia, which is moving in.

"We have a situation where Turkey is taking land from Syria. Syria's not happy about it. Let them work it out," Trump said. "They have a problem at a border. It's not our border. We shouldn't be losing lives over it."

Trump said he was sending Vice President Mike Pence and Secretary of State Mike Pompeo to Ankara to urge the Turks to halt their weeklong offensive into northeastern Syria. But his remarks, first to reporters in the Oval Office and later at a news conference with his Italian counterpart, suggested he sees little at stake for America.

"Syria may have some help with Russia, and that's fine," he said. "They've got a lot of sand over there. So, there's a lot of sand that they can play with."

"Let them fight their own wars."

More than once, Trump suggested the United States has little concern in the Middle East because it is geographically distant -- a notion shared by some prior to Sept. 11, 2001, when al-Qaida militants used Afghanistan as a base from which to attack the U.S. That attack set off a series of armed conflicts, including in Iraq, that Trump considers a waste of American lives and treasure.

The current withdrawal is the worst decision of Trump's presidency, said South Carolina Sen. Lindsey Graham, who meets often with the president and is one of his strongest and most important supporters in Congress.

Senate Republican leader Mitch McConnell of Kentucky said he strongly disagreed with Trump and had told the president so. But he asked, "What tools do we have" to back up that disagreement?

Turkish troops and Turkish-backed Syrian fighters launched their offensive against Kurdish forces in northern Syria a week ago, two days after Trump suddenly announced he was withdrawing the U.S. from the area. Turkey's Erdogan has said he wants to create a 30-kilometer (20-mile) -deep "safe zone" in Syria.

Ankara has long argued the Kurdish fighters are nothing more than an extension of the Kurdistan Workers Party, or PKK, which has waged a guerrilla campaign inside Turkey since the 1980s and which Turkey, as well as the U.S. and European Union, designate as a terrorist organization.

Trump mischaracterized the progress made thus far by the U.S. military in carrying out his instructions to withdraw all 1,000 troops in northeastern Syria. He referred to the approximately two dozen soldiers who evacuated from Turkey's initial attack zone last week, but cast that as meaning the U.S. has "largely" completed its pullout.

A U.S. official familiar with planning for the withdrawal of the 1,000 said that they are consolidating onto two main bases but have not yet begun flying out of Syria in significant numbers. Military equipment is being gathered and flown out, the official said, speaking on condition of anonymity due to the sensitivity of the withdrawal, which poses big security risks.

Trump downplayed the crisis that followed his decision to pull out of Syria, which critics say amounted to giving Turkey a green light to invade against the Kurdish fighters.

"It's not between Turkey and the United States, like a lot of stupid people would like you to believe," Trump said. "Our soldiers are not in harm's way, as they shouldn't be."

Trump did impose new sanctions on Turkey this week in an attempt to force Erdogan to end his assault. But he said Wednesday, "It's time for us to come home."

Even as Trump defended his removal of U.S. troops from northeastern Syria, he praised his decision to send more troops and military equipment to Saudi Arabia to help the kingdom defend against Iran.

Trump said the U.S. is sending missiles and "great power" to the Saudis, and "they're paying for that."