WASHINGTON (AP) - Members of President Donald Trump’s failed presidential campaign played key roles in orchestrating the Washington rally that spawned a deadly assault on the U.S. Capitol, according to an Associated Press review of records, undercutting claims the event was the brainchild of the president's grassroots supporters.

A pro-Trump nonprofit group called Women for America First hosted the "Save America Rally" on Jan. 6 at the Ellipse, an oval-shaped, federally owned patch of land near the White House. But an attachment to the National Park Service public gathering permit granted to the group lists more than half a dozen people in staff positions for the event who just weeks earlier had been paid thousands of dollars by Trump’s 2020 reelection campaign. Other staff scheduled to be "on site" during the demonstration have close ties to the White House.

Since the siege, several of them have scrambled to distance themselves from the rally.

The riot at the Capitol, incited by Trump’s comments before and during his speech at the Ellipse, has led to a reckoning unprecedented in American history. The president told the crowd to march to the Capitol and that "you’ll never take back our country with weakness. You have to show strength, and you have to be strong."

A week after the rally, Trump was impeached by the House of Representatives, becoming the first U.S. president ever to be impeached twice. But the political and legal fallout may stretch well beyond Trump, who will exit the White House on Wednesday before Democrat Joe Biden takes the oath of office. Trump had refused for nearly two months to accept his loss in the 2020 election to the former vice president.

Women for America First, which applied for and received the Park Service permit, did not respond to messages seeking comment about how the event was financed and about the Trump campaign’s involvement. The rally drew tens of thousands of people. 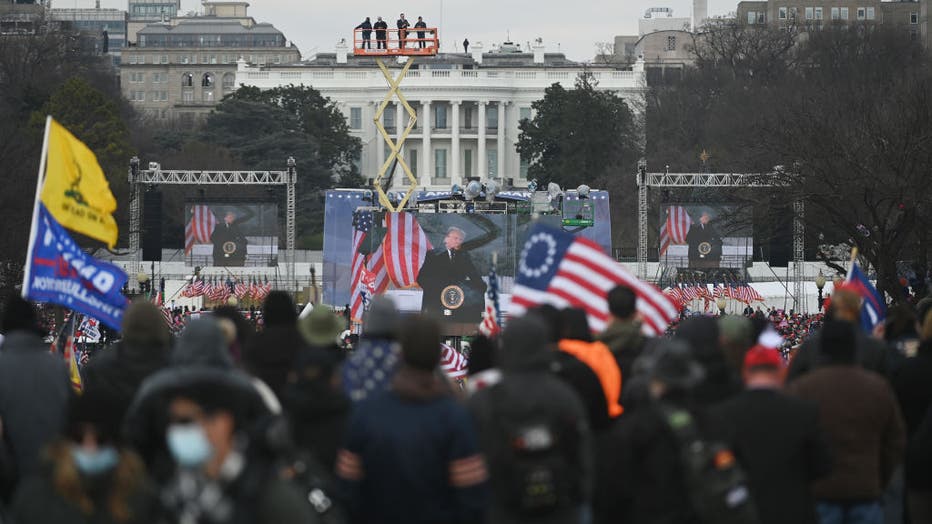 WASHINGTON, DC - JANUARY 06: President Donald Trump speaks as his supporters gather for the Save America March event that stretched from the White House to the Washington Monument on Wednesday January 06, 2021 in Washington, DC. Pro-Trump supporters

In a statement, the president’s reelection campaign said it "did not organize, operate or finance the event." No campaign staff members were involved in the organization or operation of the rally, according to the statement. It said that if any former employees or independent contractors for the campaign took part, "they did not do so at the direction of the Trump campaign."

At least one was working for the Trump campaign this month. Megan Powers was listed as one of two operations managers for the Jan. 6 event, and her LinkedIn profile says she was the Trump campaign's director of operations into January 2021. She did not respond to a message seeking comment.

The AP’s review found at least three of the Trump campaign aides named on the permit rushed to obscure their connections to the demonstration. They deactivated or locked down their social media profiles and removed tweets that referenced the rally. Two blocked a reporter who asked questions.

Caroline Wren, a veteran GOP fundraiser, is named as a "VIP Advisor" on an attachment to the permit that Women for America First provided to the agency. Between mid-March and mid-November, Donald J. Trump for President Inc. paid Wren $20,000 a month, according to Federal Election Commission records. During the campaign, she was a national finance consultant for Trump Victory, a joint fundraising committee between the president’s reelection campaign and the Republican National Committee.

Wren was involved in at least one call before the pro-Trump rally with members of several groups listed as rally participants to organize credentials for VIP attendees, according to Kimberly Fletcher, the president of one of those groups, Moms for America.

Wren retweeted messages about the event ahead of time, but a cache of her account on Google shows at least eight of those tweets disappeared from her timeline. She apparently removed some herself, and others were sent from accounts that Twitter suspended.

One of the messages Wren retweeted was from "Stop the Steal," another group identified as a rally participant on a website promoting the event. The Jan. 2 message thanked Republican senators who said they would vote to overturn Biden’s election victory, including Josh Hawley of Missouri and Ted Cruz of Texas. She also retweeted a Jan. 1 message from the president promoting the event, as well as promotional messages from one of the president’s son, Eric Trump, and Katrina Pierson, a Tea Party activist and a spokesperson for Trump’s 2016 presidential campaign.

Wren did not return messages seeking comment, and locked her Twitter account after the AP reached out to her last Monday to ask her about her involvement in the Trump rally and the tweets she had removed. Several days later, she blocked the AP reporter.

Maggie Mulvaney, a niece of former top Trump aide Mick Mulvaney, is listed on the permit attachment as the "VIP Lead." She worked as director of finance operations for the Trump campaign, according to her LinkedIn profile. FEC records show Maggie Mulvaney was earning $5,000 every two weeks from Trump’s reelection campaign, with the most recent payment reported on November 13.

Maggie Mulvaney had taken down her Twitter account as of last Monday, although it reappeared after the AP asked her about the account’s removal.

Maggie Mulvaney retweeted several messages on Jan. 6, including one from the president that urged support for the Capitol Police. Trump's Twitter account has been suspended, but the message could be seen in a cache of her Twitter account captured by Google. She also retweeted a message from her uncle, urging Trump to address the nation.

Maggie Mulvaney did not respond to messages seeking comment.

The insurrection at the Capitol prompted Mick Mulvaney to quit his position as Trump’s special envoy to Northern Ireland. He told CNBC a day after the assault that remaining in the post would prompt people to say "‘Oh yeah, you work for the guy who tried to overtake the government.’"

The leaders of Women for America First aren’t new to politics.

Amy Kremer, listed as the group’s president on records filed with Virginia’s state corporation commission, is "one of the founding mothers of the modern day tea party movement," according to her website. Her daughter, Kylie Jane Kremer, is the organization’s treasurer, according to the records.

The IRS granted Women for America First tax-exempt status as a social welfare organization a year ago, with the exemption retroactive to February 2019. The AP requested that the group provide any tax records it may have filed since then, but received no response.

In a statement issued the same day rioters attacked the Capitol, Amy Kremer denounced the assault and said it was instigated after the rally by a "handful of bad actors," while seeming to blame Democrats and news organizations for the riot.

"Unfortunately, for months the left and the mainstream media told the American people that violence was an acceptable political tool," she said. "They were wrong. It is not."

The AP reviewed social media posts, voter registrations, court files and other public records for more than 120 people either facing criminal charges related to the Jan. 6 unrest or who, going maskless during the pandemic, were later identified through photographs and videos taken during the melee.

The review found the crowd was overwhelmingly made up of longtime Trump supporters, including Republican Party officials, GOP political donors, far-right militants, white supremacists, off-duty police, members of the military and adherents of the QAnon myth that the government is secretly controlled by a cabal of Satan-worshiping pedophile cannibals.

Videos posted on social media in the days following the Capitol attack shows that thousands of people stormed the Capitol. A Capitol Police officer died after he was hit in the head with a fire extinguisher as rioters descended on the building and many other officers were injured. A woman from California was shot to death by Capitol Police and three other people died after medical emergencies during the chaos.

Trump’s incendiary remarks at the Jan. 6 rally culminated a two-day series of events in Washington, organized by a coalition of the president’s supporters who echoed his baseless accusations that the election had been stolen from him. A website, MarchtoSaveAmerica.com, sprung up to promote the pro-Trump events and alerted followers, "At 1 PM, we protest at US Capitol." The website has been deactivated.

Another website, TrumpMarch.com shows a fist-raised Trump pictured on the front of a red, white and blue tour bus emblazoned with the words, "Powered by Women for America First." The logo for the bedding company "My Pillow" is also prominent. Mike Lindell, the CEO of My Pillow, is an ardent Trump supporter who’s falsely claimed Trump didn’t lose the election to Biden and will serve another four-year term as president.

"To demand transparency & protect election integrity," the web page reads. Details of the "DC PROTEST" will be coming soon, it adds, and also lists a series of bus stops between Dec. 27 and Jan. 6 where Trump backers can "Join the caravan or show your support."

Kimberly Fletcher, the Moms for America president, said she wasn’t aware the Trump campaign had a role in the rally at the Ellipse until around New Year's Day. While she didn’t work directly with the campaign, Fletcher did notice a shift in who was involved in the rally and who would be speaking.

"When I got there and I saw the size of the stage and everything, I’m like, ‘Wow, we couldn’t possibly have afforded that,’" she said. "It was a big stage. It was a very professional stage. I don’t know who was in the background or who put it together or anything."

In addition to the large stage, the rally on the Ellipse featured a sophisticated sound system and at least three Jumbotron-style screens projecting the president's image to the crowd. Videos posted online show Trump and his family in a nearby private tent watching the rally on several monitors as music blared in the background.

Justin Caporale is listed on the Women for America First paperwork as the event’s project manager. He’s identified as a partner with Event Strategies Inc., a management and production company. Caporale, formerly a top aide to first lady Melania Trump, was on the Trump campaign payroll for most of 2020, according to the FEC records, and he most recently was being paid $7,500 every two weeks. Caporale didn’t respond to requests for comment.

Tim Unes, the founder and president of Event Strategies, was the "stage manager" for the Jan. 6 rally, according to the permit paperwork. Unes has longstanding ties to Trump, a connection he highlights on his company’s website. Trump’s presidential campaign paid Event Strategies $1.3 million in 2020 for "audio visual services," according to the campaign finance records. The company declined to comment for this story.

Another person with close ties to the Trump administration, Hannah Salem, was the rally’s "operations manager for logistics and communications," according to the permit paperwork. In 2017, she took a hiatus from the consulting firm she founded and spent three years as senior White House press aide, "executing the media strategy for President Trump’s most high-profile events," according to her company bio and LinkedIn profile.

Last week, within minutes of an AP reporter sending her a LinkedIn message asking about her involvement in and understanding of what happened on Jan. 6, Salem blocked the reporter and did not respond to questions.