Ann Rule has written roughly 40 books. Most of them have ties to the Pacific Northwes, and her latest book “Lying In Wait” is no exception. There are seven stories in all, and three of them have a Washington state connection. “All three of them came to me through someone involved in the case, who asked me for help to tell their story,” Rule explains. The first one has roots in Yakima about a ring of thieves stealing and selling babies. Rule says, “They traveled around the country and shot mothers to get their babies to sell.” Another story in the book centers on a Whidbey Island case. It’s the mysterious death of Kathy Baker, the wife of a local businessman. Rule recalls, “It’s a real sad story because she had everything. She loved her husband, she believed that he loved her, he was her whole world.”

The third local case is about Joey Pederson and his girlfriend Holly Grigsby who went on a killing spree that started in Everett. “Joey went to prison when he was 15 or 16 and didn’t get out until he was 32,” Rule said. But when he was released, the couple paid his father and step mother a deadly visit. Rule says, “They stole his father’s car. When they visit, Holly just sat in the corner and didn’t say much, and when they left, Dede was dead.” There are so many local murder mysteries and cases. "One about a man named Arthur St. Peter who was an escape artist. He escaped from the King County Jail when it was on the 10th floor and was just a master at escape,” Rule explains. They're all told from the friends and family of the victims, through Ann’s unique ability to share their story and remember their lives-one page at a time. “That’s what I try to do. Have you walk along beside me,” Rule added. Ann Rule has three book signings coming up: 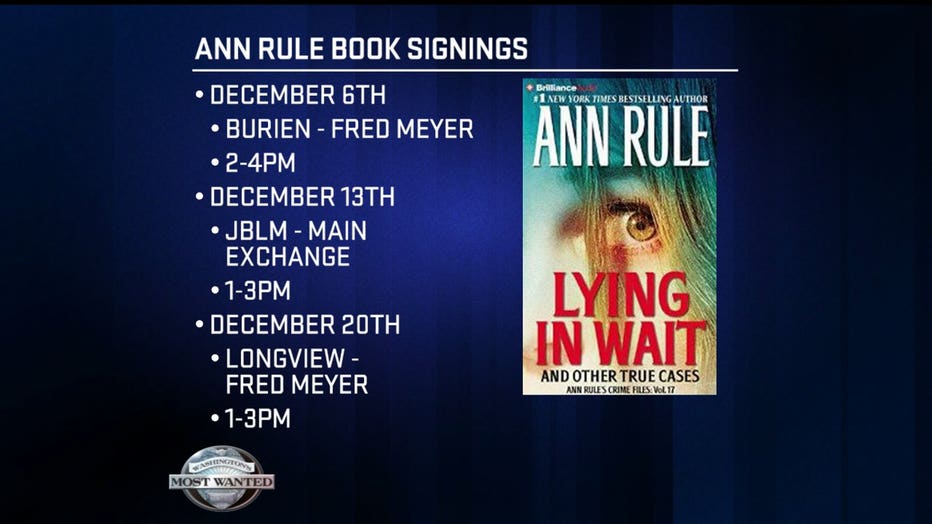