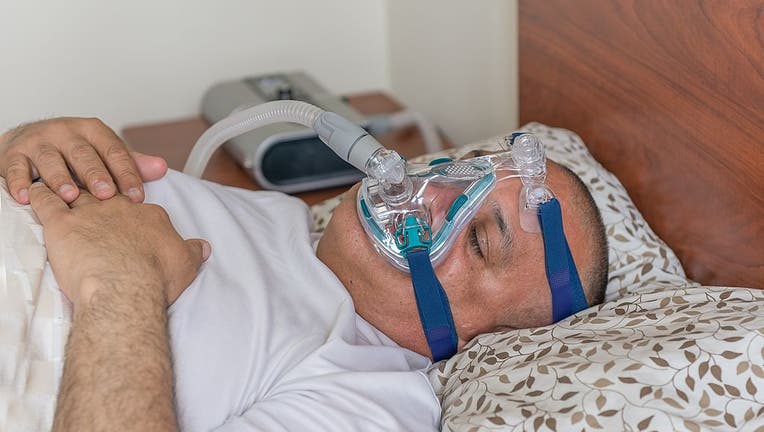 TORONTO, CANADA - 2014/05/08: CPAP treatment for sleep apnea which is a type of sleep disorder characterized by pauses in breathing or instances of shallow or infrequent breathing during sleep. (Photo by Roberto Machado Noa/LightRocket via Getty Imag

A new study found that treating sleep apnea could help reduce the risk of Alzheimer’s disease and other kinds of dementia in older adults.

Researchers from Michigan Medicine’s Sleep Disorders Centers looked at Medicare claims from more than 50,000 people across the country ages 65 and older who had been diagnosed with obstructive sleep apnea.

Obstructive sleep apnea is defined as a condition in which the upper airway collapses repeatedly throughout the night, preventing normal breathing during sleep, according to the researchers. The Centers for Disease Control and Prevention says persons with sleep apnea characteristically make periodic gasping or "snorting" noises, during which their sleep is momentarily interrupted.

A PAP machine works by gently blowing pressurized air through the airway at a pressure high enough to keep the throat open, acting as a splint of sorts, as the American Sleep Apnea Association explained it.

Researchers say this discovery is important because it stresses the impact sleep can have on cognitive function.

RELATED: Study: Middle-aged people who sleep less than than 7 hours nightly may have increased risk of dementia

Another recent study found middle-aged people who sleep less than seven hours a night may have an increased risk of dementia.

Participants who were in their 50s and 60s and were getting less than seven hours of sleep a night were 30% more likely to develop dementia, the study found.

More than 5 million people in the United States and millions more worldwide have Alzheimer’s. Current drugs only temporarily ease symptoms and do not alter the course of the disease.