SEATTLE -- Crews worked to get several train cars carrying crude oil back on the tracks Thursday.

According to BNSF officials, two tanker cars and one box car were leaning to one side after going off the tracks Wednesday night under the Magnolia Bridge. The train was traveling about 5 miles an hour at the time.

Nobody was injured in the accident and the train was not blocking traffic.

However, the tankers are carrying crude oil, a hazardous material. The tankers are not leaking, officials said, and no evacuation orders have been issued. A Seattle Fire HazMat crew was sent to inspect the train.

The bridge was not damaged at all, a BNSF official said.

"Even though they travel through our city, we as a city, do not have control over how the railways are used, and we must rely on the safety standards that are set at the federal level," Seattle Mayor Ed Murray said in a statement Thursday. "This is an important public safety issue facing Seattle and I will continue to advocate for less oil and coal coming through our city."

A day earlier, Seattle city council members announced they sent a letter to the U.S. Secretary of Transportation asking that crude oil shipments through Seattle neighborhoods be stopped.  City Councilmember Mike O'Brien and all eight of his council colleagues signed a letter calling for the U.S. Secretary of Transportation to issue an emergency order prohibiting the shipment of Bakken crude oil in legacy DOT-111 tank train cars.

Bakken is highly flammable and easily ignited at normal temperatures by heat, static discharges, sparks or flames, and vapors which may form explosive mixtures with air and spread along confined areas such as sewers, councilmembers said.

"Dozens of people have died in crude-by-rail accidents when DOT-111 tank cars were punctured and spilled flammable crude," said O'Brien. "The catastrophic explosions can be triggered by a single spark and yet they travel on tracks underneath downtown and flanking both Safeco Field and CenturyLink Field. Seattle cannot afford to sit idly by with public safety in our city at risk."

The derailment is not expected to change Sounder rail service. 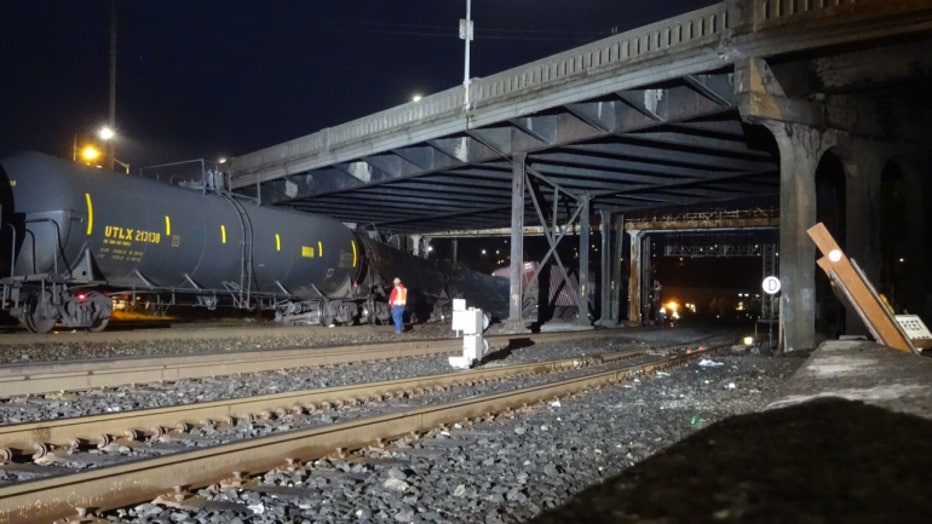