Detours and I-5 closure leads to massive backups

Detours and I-5 closure leads to massive backups

DUPONT, Wash. – Crews have removed most of the Amtrak train cars that derailed Monday near DuPont, but transportation officials said Tuesday that the southbound lanes of Interstate 5 could be potentially be closed for “several days.”

Spokespeople for the Washington State Patrol and WSDOT held a press conference Tuesday in which they detailed the intensive process of removing the 14 railcars, one by one, each of which presents its own unique challenge.

“I do want to stress – this does not mean I-5 will reopen tonight,” WSDOT’s Travis Phelps said. “It still could be closed for several days.”

Trooper Will Finn said the road will be closed "at minimum" through Wednesday morning's commute.

The Washington State Department of Transportation said operations to remove the remaining cars would continue through the night.

"Most of the derailed train cars have been loaded onto semis to be hauled away and securely stored," WSDOT said. "Bridge engineers also inspected the rail bridge and deemed it structurally sound, with only minor repairs needed for safely reopening the interstate.

"Remaining work includes relocating the cranes to position them to remove the train's locomotive, which remains on the southbound I-5 lanes. Crews also need to remove a hazard tree. It is highly like southbound I-5 will remain closed through Wednesday morning's commute and travelers should plan accordingly." 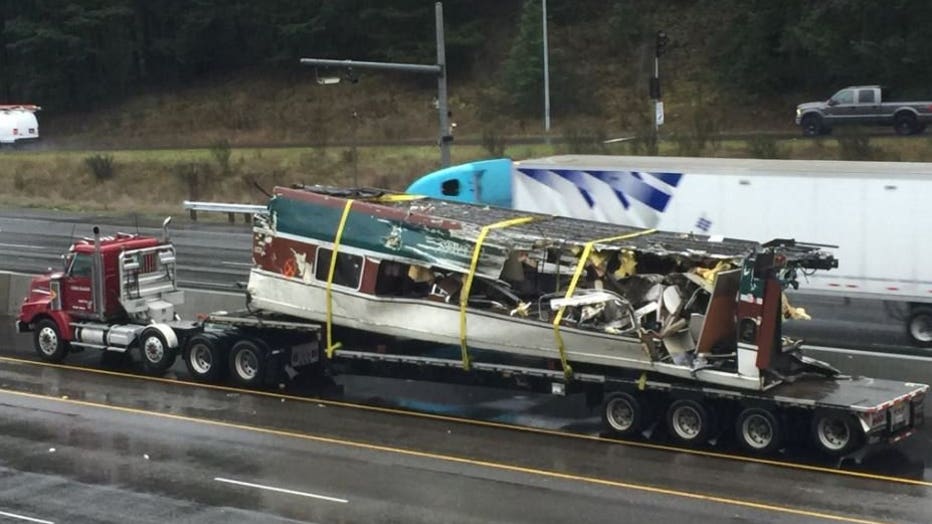 This mangled mess is one of the cars involved in the deadly Amtrak train derailment yesterday. Five of the 14 cars are being transported to Joint Base Lewis-McChord.

Heavy equipment is already on site, and crews will load them onto flatbed trailers and haul them north on the southbound lanes of I-5 to Steilacoom-DuPont Road, then brought to a secure location at Joint Base Lewis-McChord as the National Transportation Safety Board continues its investigation.