THURSTON COUNTY, Wash. -- With giant buckets of cold Nisqually River water and some smaller bins to hold fish, Megan Moore is assembling a field surgical ward outside of the small town of Yelm.

"I love the problem solving part of this," says Moore, "like the mystery part of it."

But Moore is no surgeon. She's a research biologist with NOAA's Fisheries Office in Seattle. This setup is a spring ritual along the fast-moving and pristine river for more than a decade now. And her patients: endangered steelhead.

Steelhead and salmon are not only big business in Washington state, many species are also in big trouble. But each year scientists are starting to uncover clues to turning that trend around. Thousands of jobs and millions of dollars to our state economy hang in the balance.

"It's a mystery of what's going on with steelhead in Puget Sound," she says. "And why they are dying."

On this sunny day, only two smolts will go through the anesthetized water, get a small incision, and radio tag inserted under the skin. But about 200 total will make it onto this operating table this season to be tracked for several weeks to see how many make it down the Nisqually River, into the far southern end of Puget Sound, and -- for the luckiest ones -- into the Pacific Ocean.

"So we're beginning to piece together the story, year by year," says Moore.

The data for the Nisqually River goes back to 2006, when radio tagging technology finally got small enough to put inside the fish without harming them. And the scientists were surprised then to find out that up to 90 percent of the fish in some years were not even making it to the ocean. 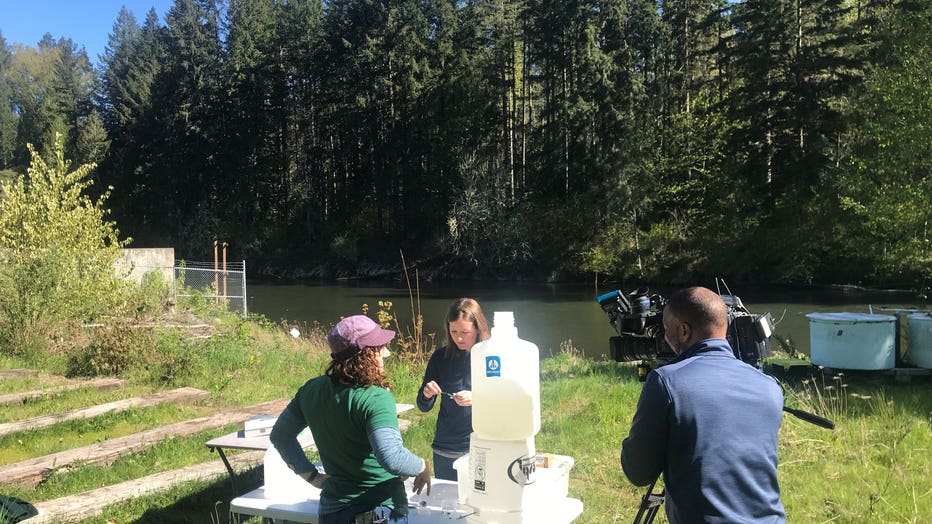 Kemp is playing the role of surgical assistant along the riverside, taking down measurements and other data to track how these fish are doing, where they're dying and hopefully answer the biggest question of all: why?

"If we can compare the years of high survival compared to years of low and understand the differences between the two," says Kemp, "we can really understand the factors contributing to survival."

Turns out, steelhead did really well in the years when the weather/ocean phenomena called "The Big Blob" of much warmer than normal ocean waters sat off the Northwest coast in 2014 and 2015.

"We saw survivals that were higher than anything we'd ever seen in tagging history," says Kemp.

In those years, the Puget Sound was full of anchovies and other small fish often called "forage fish."

"They were here in huge numbers, and we think, perhaps, that alleviated some of the predation threats on the steelhead smolts as they out-migrated," says Kemp.

Seals -- the prime suspect in the disappearing steelhead -- are not picky eaters. They just have big appetites.

"They're eating small silvery fish, whatever is available -- whatever they can find -- cause their caloric need is so great," says Kemp. "So if those small silvery fish are fatty, delicious herring or anchovies ore other forage fish -- then that's what they'll be eating. If those fish aren't around, then perhaps rely on more salmon or steelhead."

This news means biologists and state policy planners could re-tool how to try and save steelhead -- if it does turn out that helping all fish means helping struggling species in the salmon family -- and the Puget Sound orca that rely on them.

"It's also really difficult ... because it does take more data, more information, more money, more funding to do it right," says Kemp. "But I really think that's where we have the most potential for success."

While distracting predators seems to work for steelhead that move quickly to the ocean -- for chinook, it's different. They hang out in Puget Sound longer and compete with forage fish like anchovies and herring for both habitat and food.

"We think that with older age classes of herring, they often eat similar prey to juvenile chinook salmon. There is a little competitive aspect there," says Kemp. "But it's complicated because as soon as chinook get large enough -- they start eating the forage fish too."

Kemp laughs, "everything is connected. The food web is a wonderful place."

And what happened underwater with steelhead and other salmon species is connected to us humans to the tune of more than a billion dollars for the Washington state economy. The state Department of Fish and Wildlife also say these fish also mean more than 15,000 jobs or so.

"People are coming here because it's beautiful," says Megan Moore. "Because we have this intact ecosystem."

The Issaquah native says what we do with plastics, chemicals on our lawns and voting on what companies you support matters a lot down below the waterline, too.

"I think it's really important that we all recognize that we need to take care of it," says Moore, "and all play a part in managing it well."