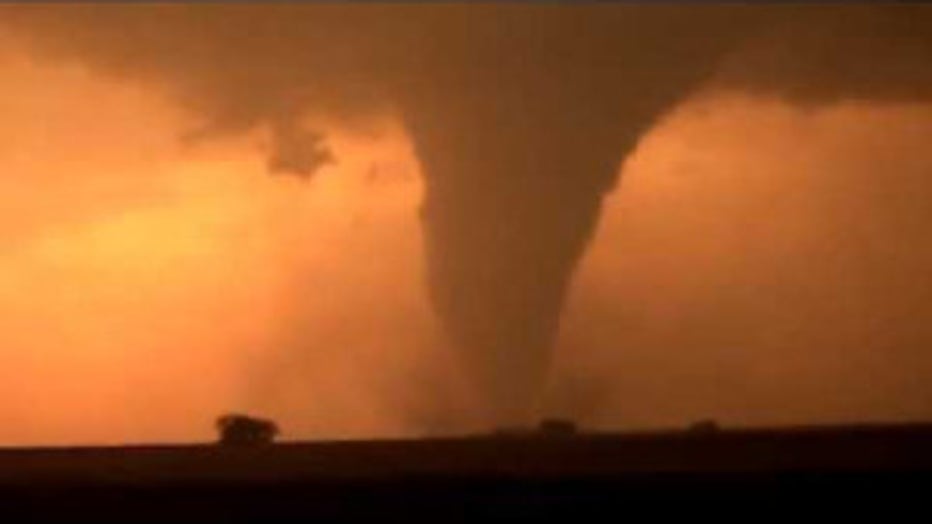 (CNN) -- At least one person was killed Sunday when tornadoes ripped through three states, tearing roofs off homes, downing power lines and tossing trees like matchsticks.

The death happened in Pottawatomie County, Oklahoma, said Sheriff Mike Booth. He had no details.

Booth said that two other people are missing at a trailer park in that county.

Rescue crews were picking through the mangled metal remains of mobile homes as darkness fell Sunday.

As many as 26 tornadoes were reported in Oklahoma, Kansas, Illinois and Iowa, according to the National Weather Service, with Oklahoma and Kansas being the hardest hit. Some of those reports might have been of the same tornado.

A large "violent and extremely dangerous" tornado was spotted on the southwest side of Wichita, Kansas, the National Weather Service said.

A second confirmed tornado was seen near Edmond, Oklahoma, said the weather service. Another tornado was spotted in nearby Luther, Oklahoma, but it was not immediately clear whether that was the same twister.

A third tornado touched down near Wellston, Oklahoma, taking out power lines and damaging several homes, according to video from CNN affiliate KFOR. The affiliate's helicopter pilot estimated the funnel cloud to be about a half-mile wide.

"It's tearing up everything," the pilot said. "Just ripping everything up in its sight."

Aerial video from KFOR and CNN affiliate KOCO showed severe damage near Wellston and near Carney, Oklahoma. Roofs were ripped from homes, branches stripped from trees and roads were filled with debris.

Tornadoes were also reported east of Dale, west of Paden, and near Prague in Oklahoma.

Part of Interstate 40 in Shawnee, Oklahoma, was shut down in both directions Sunday night after a tornado touched down, overturning multiple tractor-trailers.

Still more tornadoes were spotted in Iowa, near Earlham, Huxley and east of Dallas Center, according to the weather service.