Damage was reported on the ground by the National Weather Service as the storm moved west of the Arabi area, moving northeast into the city’s east. Photo credit: Drew & Matthew Burke via Twitter.

It’s a common myth that tornadoes don’t hit large cities, but we’re here to debunk this misconception because it’s simply not true.

Consider June 20, 2021, when an EF-3 tornado tore a 17.6-mile path of destruction across the western suburbs of Chicago. The city of Naperville, Illinois, home to nearly 150,000 people, suffered severe damage as the twister’s winds were estimated to reach 140 mph. Some 230 homes sustained damage, and at least 11 people required medical treatment, according to the National Weather Service. 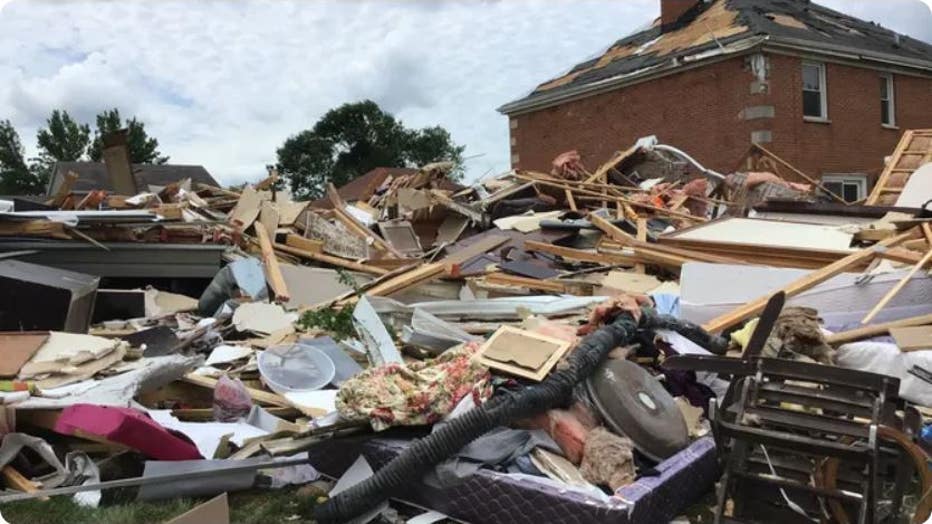 A home was completely destroyed on Princeton Circle in Naperville, Illinois, on June 20, 2021, garnering an EF-3 rating.(NWS Damage Survey)

The city of Atlanta is also no stranger to tornadoes. On the evening of March 14, 2008, a supercell thunderstorm moved into the heart of downtown Atlanta, spawning an EF-2 tornado that first touched down in Vine City, a neighborhood just west of the downtown district.

THIS IS THE LIFECYCLE OF A TORNADO

The twister’s path was just barely north of the Georgia Dome, where an NCAA basketball game – part of the Southeastern Conference (SEC) Men's Basketball Tournament – was being played between the University of Alabama and Mississippi State University.

"As Alabama hit its buzzer-beater to send the game into overtime, the EF-2 tornado began its descent into downtown Atlanta, causing a half-billion dollars in damage to the city," said FOX Weather meteorologist Tavyen Matthews, who lived in Atlanta at the time.

The NWS estimated the tornado had maximum winds of 130 mph. One person was killed in a building collapse, and at least 30 others were injured by debris, according to the NWS. 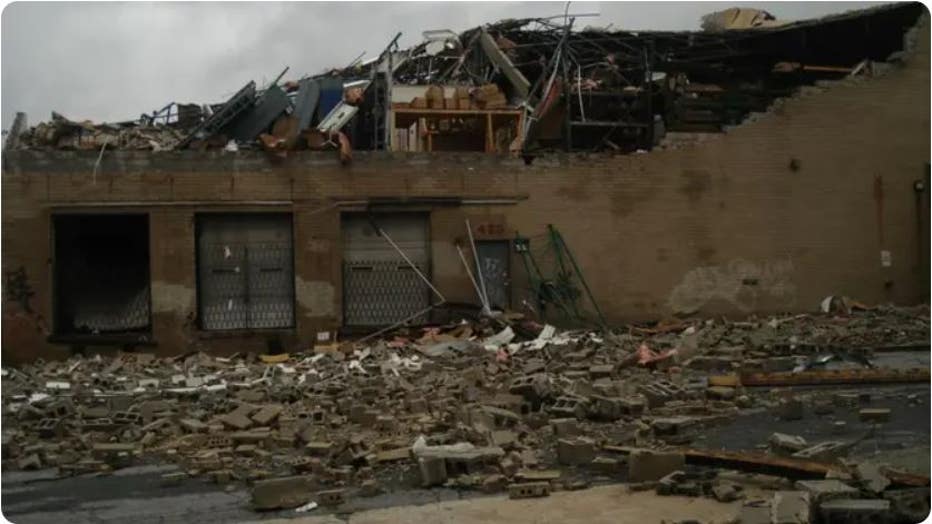 An Atlanta warehouse near Interstate 20 and the McPherson Avenue MARTA station was damaged by an EF-2 tornado on March 14, 2008. (NWS Damage Survey)

"Many speculate the buzzer-beater was the saving grace of many people’s lives that day because, had the game ended, there would have been many more people on the road and in the path of this dangerous tornado," Matthews said.

Five days past the ten-year anniversary of that tornado, there was an extremely close call on March 19, 2018, when an EF-2 tornado with 120-mph winds caused substantial damage in Fairburn, Georgia, only 10 miles from the world’s second-busiest airport in Atlanta. (Yes, Atlanta again.)

Then, a few weeks later, a potent mid-April cyclone brought a historic winter storm to the upper Midwest and Great Lakes while tornadoes ripped through parts of the Southeast.

On April 15, 2018, Greensboro, North Carolina, the state’s third-largest city by population, was unlucky enough to be in the path of an EF-2 tornado packing winds of 135 mph. The twister touched down on Interstate 40 in Greensboro and tracked northeastward across the densely populated eastern side of the city, according to the NWS. It produced widespread damage, up to one-quarter-mile wide, including to three elementary schools.

We also can’t forget about the F-5 tornado that tore through Moore and Oklahoma City, Oklahoma, on May 3, 1999, killing 36 people, injuring at least 583 others, destroying or damaging more than 4,300 homes and causing $1 billion in damage. It was the sixth-deadliest tornado in Oklahoma history, according to the NWS. 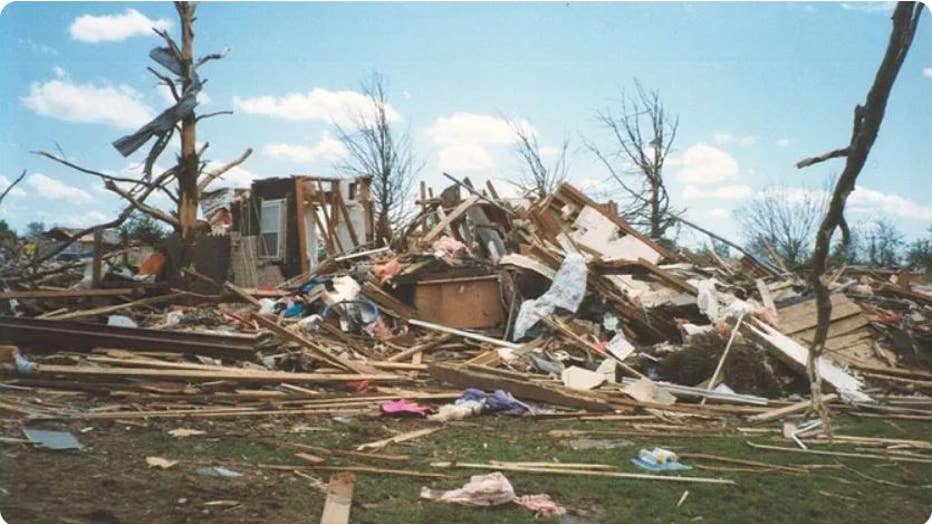 Complete destruction was seen after the Moore/Oklahoma City, Oklahoma, F-5 tornado on May 3, 1999. (NWS Damage Survey)

Why is there a misconception that tornadoes don't hit large cities?

The United States Census Bureau recognizes two types of urban areas: urbanized areas of at least 50,000 people, as well as urban clusters of at least 2,500 but less than 50,000 people, both representing densely developed territory and encompassing residential, commercial and other non-residential urban land uses.

These urban areas make up a relatively small chunk of real estate, comprising only 3% of the total land area in the U.S., according to the Center for Sustainable Systems at the University of Michigan. However, a growing percentage of the world’s population is now living in urban centers. 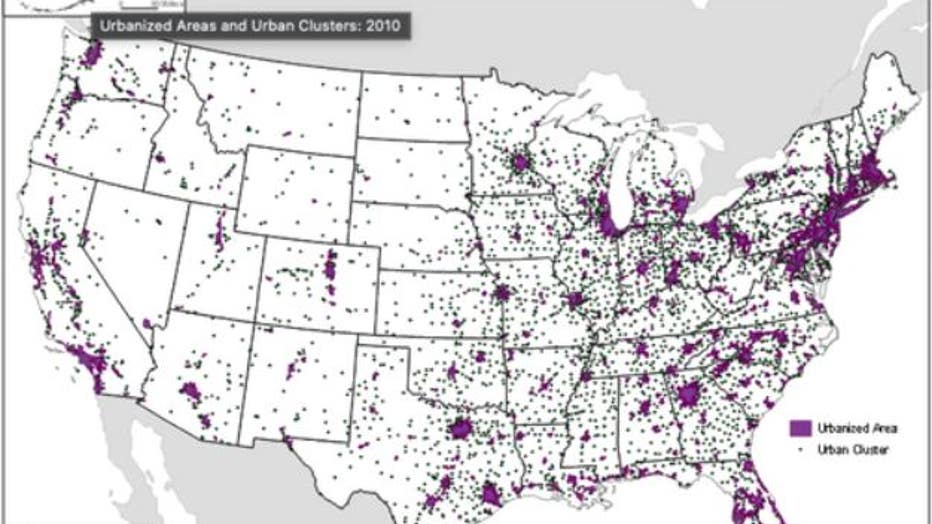 Urbanized areas and urban clusters as of the 2010 Census. (United States Census Bureau)

These data tell us two things:

First, since urban areas only cover 3% of America’s land surface, it’s more difficult for a tornado to strike a city because 97% of the nation is not urbanized (which is likely why many people believe cities are protected from twisters). However, the cases mentioned earlier in the Atlanta, Chicago, Greensboro and Oklahoma City metro areas are several prime examples from the last 25 years that debunk this myth.

7 THINGS TO KNOW ABOUT TORNADO ALLEY

Second, since more of the population is migrating to urban areas, any tornado that can defeat those 97-to-3 odds and tear through a city has the potential to kill more people than it would in a rural area with fewer people.

The most likely regions to get tornadoes in the United States are "Tornado Alley" in the Great Plains, as well as the southern U.S., particularly parts of Arkansas, Louisiana, Mississippi, Alabama, Georgia and Tennessee. The map below illustrates this point by showing where Tornado Watches are most frequently issued by NOAA’s Storm Prediction Center in the Lower 48 states. 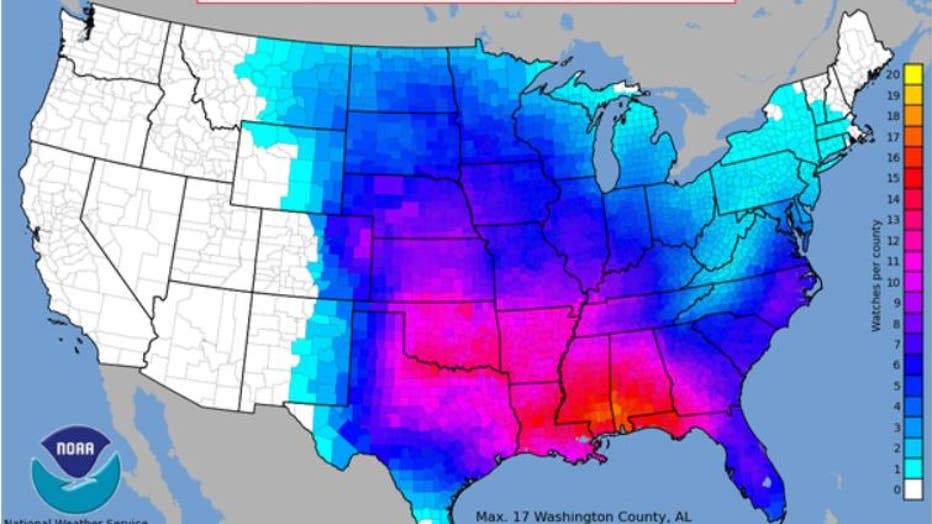 Compare that to the U.S. Census Bureau map above showing the geographical extent of urban areas in the U.S., and you’ll notice there isn’t much overlap between the locations of urban centers and where twisters are most frequent, making it clearer as to why a tornado touchdown in a large city is a relatively rare occurrence.

But it’s happened before and it will happen again.

A tornado is not magically diverted by a building or even a mountain. Tornado strikes in major metropolitan areas are only less common because the vast amount of rural landscape in the U.S. far surpasses the nation’s limited urban footprint.

Editor's note: This article was originally published on Oct. 27, 2021.