A Tornado Warning is a rare thing in Western Washington, and an alert sent earlier today startled thousands in Kitsap County.

KITSAP COUNTY, Wash. - A Tornado Warning for Kitsap County that was issued Tuesday afternoon has been canceled.

Earlier in the day, the National Weather Service issued a Tornado Warning through 12:15 p.m. for Central Kitsap County.

A tornado warning for Kitsap County on Nov. 9 has been canceled.

NWS said the storm which prompted the warning has weakened below severe limits, and no longer appears capable of producing a tornado. Therefore, the warning has been canceled.

GET THE FOX 13 WEATHER APP FOR SEVERE WEATHER ALERTS

A severe thunderstorm capable of producing a tornado was located near Seabeck.

NWS Seattle emphasized that there were no tornado warnings for Seattle after many people outside of Kitsap County reported receiving emergency notifications on their phones.

FOX 13 News Meteorologist Brian MacMillan said there is a chance for more severe weather on Thursday.

There is still a chance for more severe weather today, especially along the Olympic Peninsula and the Washington Coast. Severe thunderstorms can bring strong localized wind, hail, and a potential for rotation. The Storm Prediction Center has put that area in a "Marginal Risk" category.

Thunderstorms are still possible this afternoon and evening from Whatcom County to Pierce County. This sort of convective pattern is common in the fall and spring and gives us a good shot as seeing some lightning. I see a lot of heavy rain and hail heading our way at this hour. Erin will be tracking it all the rest of the night. 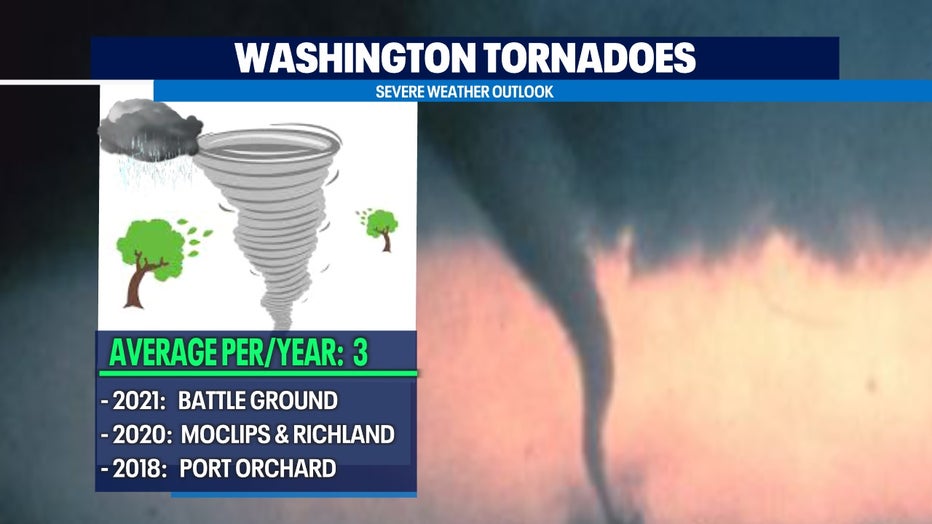 Tornado Warnings are rare in our neck of the woods (usually they touch down without warning), but if this happens again we should make sure viewers know to get to an interior room of the house and to stay away from windows. Even small tornados aren’t worth messing with. The last Washington tornado hit in September in Battle Ground. It was a small EF-0 and there were no injuries or deaths. That one, like most we get dropped without a Tornado Warning being issued.