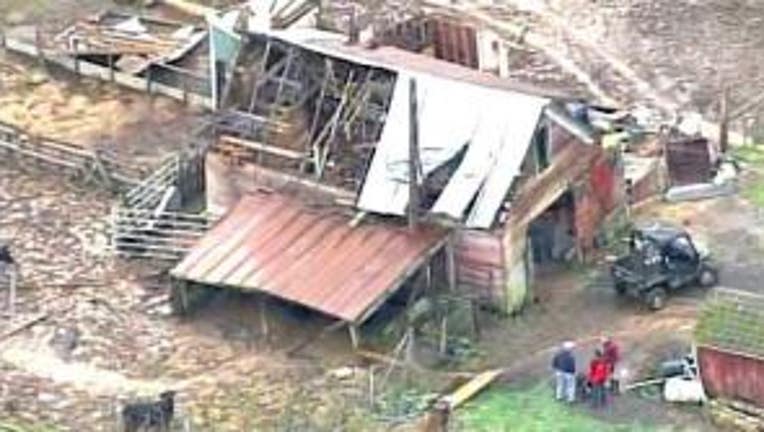 HOCKINSON, Wash. (KPTV/Portland) -- A woman living near Hockinson in Clark County heard a boom and looked out her window just in time to see a swirling cloud touch down on top of her barn and rip off part of the roof.

It happened just after 4 p.m. in Hockinson, which is about 23 miles northeast of Portland.

Irene Ginter said they had hail and rain throughout the afternoon, along with a black sky for what seemed like two hours.

Then, an extreme wind event hit.

Firefighters said strong winds picked up pieces of the barn's roof and hurled them over a 10-acre area to the east. The building partially collapsed.

"The barn was flying around," Ginter said. "We have half a barn hanging there."

Ginter said the barn was built in 1945 and stores hay.

The National Weather Service did not issue a tornado warning, but later confirmed that a tornado touched down near Hockinson at that time.

Ginter said it was a swirling white could that lowered itself onto the barn.

Dispatchers said no other calls were made to 911 reporting a possible tornado in the area.

No one was hurt in the storm.