KABUL, Afghanistan - The top U.S. commander in Afghanistan relinquished his position at a ceremony in the capital Kabul on Monday, taking the United States a step closer to ending its 20-year war. The move came as Taliban insurgents continue to gain territory across the country.

Another four-star general will assume authority from his U.S.-based post to conduct possible airstrikes in defense of Afghan government forces, at least until the U.S. withdrawal concludes by Aug. 31.

Gen. Scott Miller has served as America’s top commander in Afghanistan since 2018. He handed over command of what has become known as America’s "forever war" in its waning days to Marine Gen. Frank McKenzie, the head of U.S. Central Command. McKenzie will operate from Central Command headquarters in Tampa, Florida.

The handover took place in the heavily fortified Resolute Support headquarters in the heart of Kabul at a time of rapid territorial gains by Taliban insurgents across Afghanistan.

In a flag-passing ceremony, Miller remembered the U.S. and NATO troops killed in the nearly 20-year war as well as the thousands of Afghans who lost their lives.

The Afghanistan National Defense and Security Forces, mostly funded by the United States and NATO, have put up resistance in some parts of the country, but overwhelmingly Afghan government troops appear to have abandoned the fight.

In recent weeks, the Taliban have gained several strategic districts, particularly along the borders with Iran, Uzbekistan and Tajikistan. 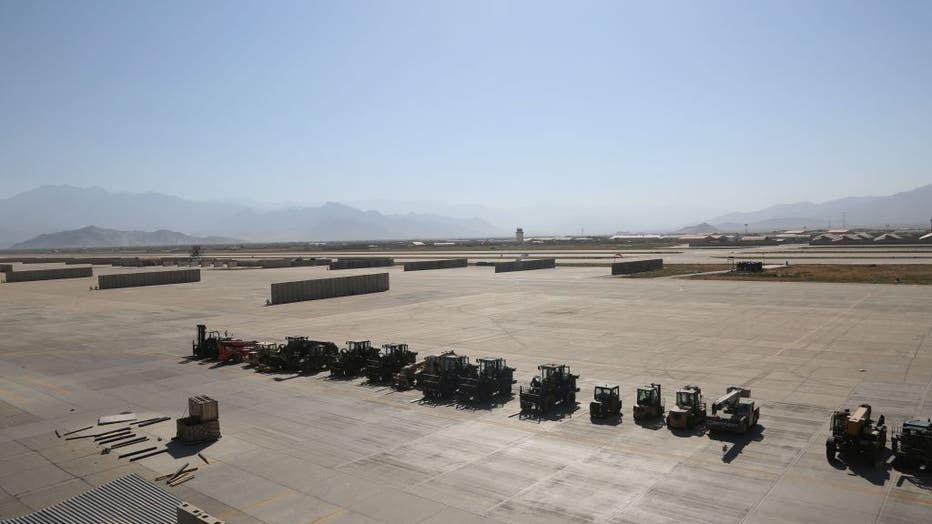 Photo taken on July 8, 2021, shows the Bagram Airfield base after all U.S. and NATO forces evacuated in Parwan province, eastern Afghanistan. (Photo by Rahmatullah ALizadah/Xinhua via Getty Images)

Afghanistan’s National Security Adviser Hamdullah Mohib, who attended the handover, said the U.S. and NATO withdrawal has left a vacuum that resulted in Afghanistan’s national security forces stranded on the battlefield without resupplies, sometimes running out of food and ammunition.

In comments after the ceremony, Mohib said the greatest impact of the withdrawal is a lack of aircraft to resupply troops. Currently, the government is regrouping to retake strategic areas and defend its cities against Taliban advances.

The Taliban control more than one-third of Afghanistan’s 421 districts and district centers. A Taliban claim that they control 85% of the districts is widely seen as exaggerated.

After Miller’s departure, a two-star admiral based at the U.S. Embassy in Kabul will oversee the U.S. military’s role in securing the American diplomatic presence in Kabul, including defending the Kabul airport.

Miller’s departure does not reduce the scope of the U.S. military mission in Afghanistan, since McKenzie will assume the authorities now held by Miller to conduct airstrikes in defense of Afghan government forces under certain circumstances. The conditions under which such strikes might be used are not clear, nor is it known for how long McKenzie will keep the strike authority.

A deal the U.S. struck with the Taliban in February 2020 included a promise from the insurgent movement not to attack U.S. and NATO troops, a commitment it appears they have largely kept.

While Washington is not saying how many troops remain in Afghanistan, a CENTCOM statement more than a week ago said the withdrawal was 90 percent complete.

President Joe Biden has reiterated that the U.S. will remain engaged in Afghanistan with humanitarian assistance. The U.S. also is committed to spending $4.4 billion annually to fund Afghanistan’s security forces until 2024.

RELATED: US war in Afghanistan will end August 31, Biden says