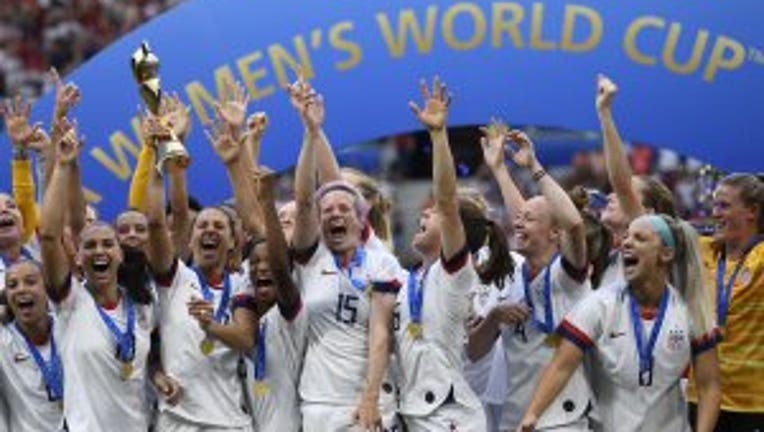 USA's players celebrate with the trophy after the France 2019 Womens World Cup football final match between USA and the Netherlands, on July 7, 2019, at the Lyon Stadium in Lyon, central-eastern France. (Photo by CHRISTOPHE SIMON / AFP) (Photo credit

House Speaker Nancy Pelosi wrote to colleagues Monday that "by popular demand on both sides of the aisle," she has invited the players to the Capitol "to celebrate their inspiring victory." Senate Minority Leader Chuck Schumer said he, too, has invited them as he lauded them on the Senate floor for their "sustained level of excellence."

There was no immediate indication of when or if a visit might occur. Alex Morgan, who scored six goals in the tournament, said the players hadn't discussed the invitation.

"Of course, it would be great to do something as a team together like that, but we haven't even had time to talk about that," she told reporters in New York on Monday.

The U.S. team has captured the last two World Cups and has won four, more than any other country.

Many players have been leading advocates of gender equity. Star Megan Rapinoe has said she would not visit the White House if invited by President Donald Trump.