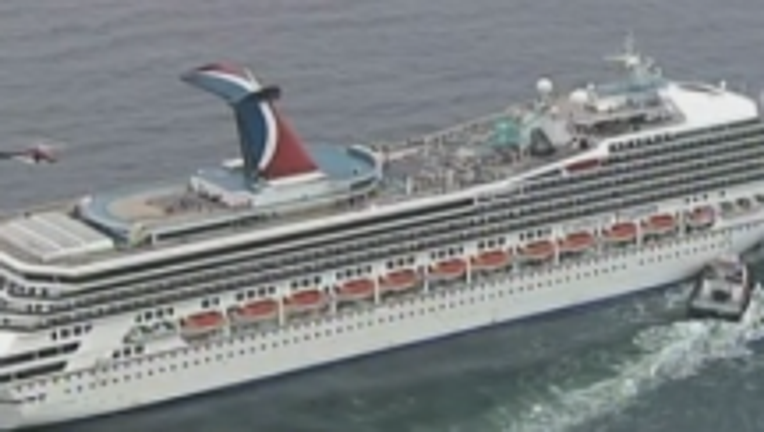 MOBILE, Ala. -- Almost five days after their ship was disabled by an engine fire, the more than 4,200 people on board the Carnival cruise ship Triumph began disembarking late Thursday night, about an hour after docking at the Port of Mobile.

Crews were busy tying the ship to the dock at the Alabama Cruise Terminal as cheering passengers hung over balcony rails or waited in lines to exit the vessel.

It's almost over for the 4,227 passengers and crew stuck on a filthy, disabled cruise ship that limped into port three days after it was due.

Once the ship ties up at the dock, it will take four to five hours to get everyone off, said Terry Thornton, a Carnival vice president, said.

Carnival CEO Gerry Cahill told reporters he was going on to the ship to personally apologize to passengers.

"We pride ourselves in providing our guests with a great vacation experience, and clearly we failed in this particular case," he said.

As the ship approached Mobile, passengers were thrilled.

"I just had a crab sandwich with lobster for lunch because they are finishing off all the food," said Ed Buck, who was staying on an upper floor. "Life is good. People are very excited right now. We're getting back. You know, I think the media's made a lot of -- made it sound real bad. It's not quite as bad as everybody says."

Most people didn't agree with Buck, who said he has cruised 13 times and will do so again.

"I don't know how much more we could have took," passenger Larry Poret said via cell phone. Poret was aboard with his 12-year-old daughter, Rebekah, who said the ordeal has been "really, really difficult."

Thanks to CNN cameras aboard a helicopter circling the crippled ship, Rebekah's mother, Mary Poret, was able to see her daughter for the first time in six days.