FLORENCE: I KNOW IT'S A LIFE-THREATENING RISK

MYRTLE BEACH, S.C. (AP) — Time is running short to get out of the way of Hurricane Florence, a monster of a storm that has a region of more than 10 million people in its potentially devastating sights as it zeroes in on the Southeastern coast.

Forecasters said wind speeds have dropped from a high of 140 mph to 110 mph, reducing it from a Category 4 storm to a Category 2, and additional fluctuations and weakening were likely as it swirled toward land. But authorities warned Florence has an enormous wind field that has been growing larger, raising the risk of the ocean surging on to land and making Florence extremely dangerous. 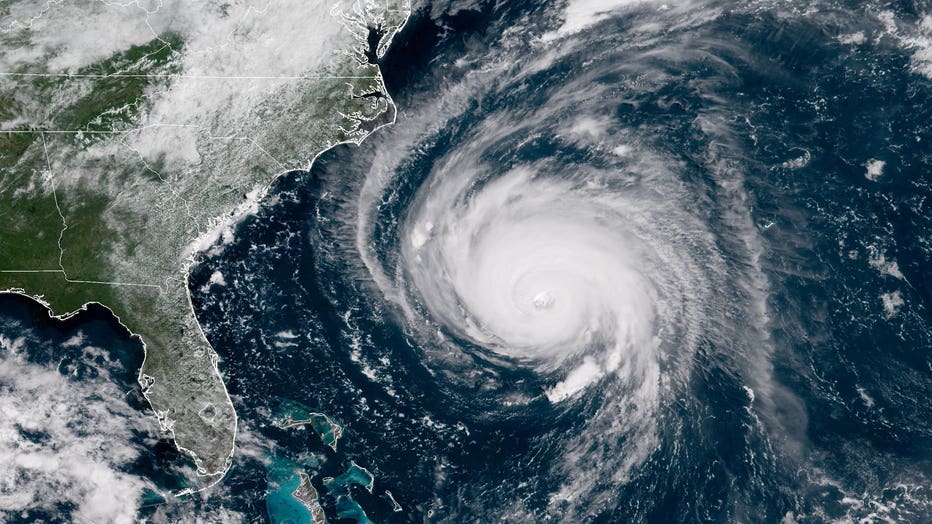 The National Hurricane Center's best guess was that Florence would blow ashore as early as Friday afternoon around the North Carolina-South Carolina line, then slog its rainy way westward with a potential for catastrophic inland flooding that could swamp homes, businesses and farm fields.

FLORENCE-SURFER IN THE WATERS OFF CAROLINA

FLORENCE-SURFER IN THE WATERS OFF CAROLINA

Weather Underground meteorology director Jeff Masters said Florence eventually could strike as merely a Category 1 hurricane with winds less than 100 mph, but that's still enough to cause at least $1 billion in damage. Water kills more people in hurricanes than wind, and he said it will still be an extremely dangerous storm for rain and storm surge.

The hurricane center is forecasting the storm to hover near the coast Saturday with winds of around 80 mph (130 kph) before landfall, but with rainfall in the 20 to 30 inches range and up to 13 feet of storm surge.

President Donald Trump both touted the government's readiness and urged people to get out of the way. "Don't play games with it. It's a big one," he said at the White House.

As of 11 p.m. EDT Wednesday, the storm was centered 260 miles (455 kilometers) east southeast of Wilmington, North Carolina, moving northwest at 17 mph (28 kph). The hurricane center said Florence will approach the coast Friday and linger for a while before rolling ashore. 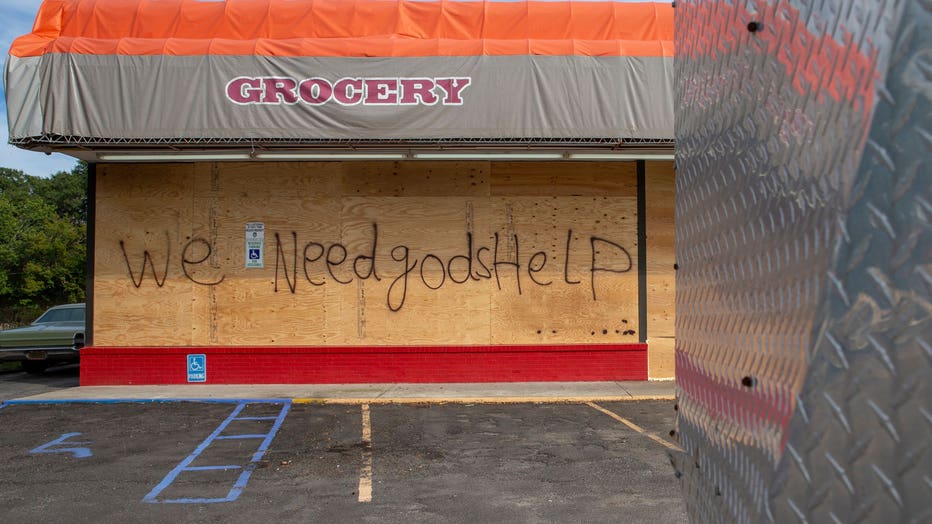 It's unclear exactly how many people fled, but more than 1.7 million people in the Carolinas and Virginia were warned to clear out. Airlines had canceled nearly 1,000 flights and counting. Home Depot and Lowe's activated emergency response centers to get generators, trash bags and bottled water to stores before and after the storm. The two hardware chains said they sent in a total of around 1,100 trucks. 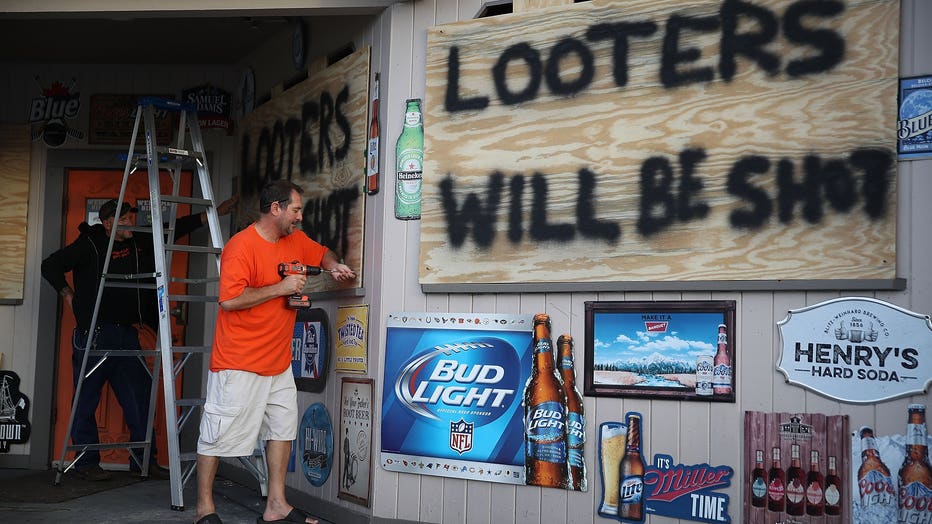 Doug Lewis (L) and Chris Williams use plywood with the words 'Looters will be shot' to cover the windows of Knuckleheads bar as they try to protect the business ahead of the arrival of Hurricane Florence on September 12, 2018 in Myrtle Beach, United

Duke Energy, the nation's No. 2 power company, said Florence could knock out electricity to three-quarters of its 4 million customers in the Carolinas, and outages could last for weeks. Workers are being brought in from the Midwest and Florida to help in the storm's aftermath, it said.

Boarding up his home in Myrtle Beach, South Carolina, Chris Pennington watched the forecasts and tried to decide when to leave.

"In 12 or 18 hours, they may be saying different things all over again," he said.

Computer models of exactly what the storm might do varied, adding to the uncertainty. Reacting to the possibility of a more southerly track, Georgia Gov. Nathan Deal declared an emergency but did not immediately order any evacuations.

"I ask all Georgians to join me in praying for the safety of our people and all those in the path of Hurricane Florence," Deal said.

In Virginia, where about 245,000 residents were ordered to evacuate low-lying areas, officials urged people to remain away from home despite forecast changes showing Florence's path largely missing the state.

Their entire neighborhood evacuated in Wilmington, North Carolina, David and Janelle Garrigus planned to ride out Florence at their daughter's one-bedroom apartment in Charlotte. Unsure of what they might find when they return home, the couple went shopping for a recreational vehicle.

"We're just trying to plan for the future here, not having a house for an extended period of time," David Garrigus said.

Melody Rawson evacuated her first-floor apartment in Myrtle Beach and arrived at Atlanta Motor Speedway in Hampton, Georgia, to camp for free with three other adults, her disabled son, two dogs and a pet bird.

"We hope to have something left when we get home," she said. Three other Southern raceways also opened campgrounds to evacuees.

Forecasters worried the storm's damage will be all the worse if it lingers on the coast. The trend is "exceptionally bad news," said University of Miami hurricane researcher Brian McNoldy, since it "smears a landfall out over hundreds of miles of coastline, most notably the storm surge."

With South Carolina's beach towns more in the bull's-eye because of the shifting forecast, Ohio vacationers Chris and Nicole Roland put off their departure from North Myrtle Beach to get the maximum amount of time on the sand. Most other beachgoers were long gone.

"It's been really nice," Nicole Roland said. "Also, a little creepy. You feel like you should have already left."