SEATTLE-- Jamie Garl rolls up her right sleeve on her Virginia Mason scrubs, she explains that she uses her left one to use the ultrasound machine to scan patients' hearts. "Do you have any allergies, Jamie?" asks the worker in the large auditorium hosting the hospital's flu clinic. "Not that I'm aware of," she replies. Garl works in Virginia Mason's cardiac unit where lots of her patients have immune deficiencies and getting the flu virus could be fatal. "I see mostly elderly populations," says Garl.  "I'm in pretty close contact, face-to-face." 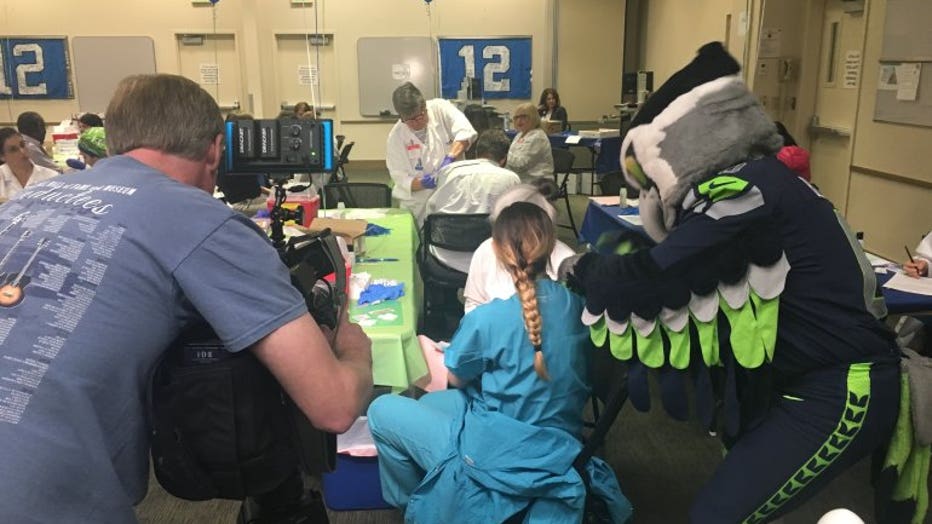 Garl and her six thousand colleagues at Virginia Mason Medical Center are on the front lines of the battle against influenza. More than 99 percent of the staff and volunteers here will get vaccinated to help keep them and their patients safe. Influenza seems common, but it can be a killer. More than 57 thousand Americans lost their lives last year to complications from influenza. That's up from annual average of about 49 thousand who die in a typical flu season. The virus rapidly mutates from year to year and epidemiologists say this year is expected to be worse than usual based on what they're seeing in the southern hemisphere. Places like Australia, where their flu season is just now coming to an end.

"It’s always flu season somewhere," says Dr. Christopher Baliga. He's an infectious disease specialist at Virginia Mason.  "We live in a global village. We are in a city that has a major airport we have people flying in from all over the world all the time."

For this year's coming flu season, the Centers for Disease Control says no to the nose spray. They say it is just not as effective as getting the actual shot. They also recommend that everyone over the age of six months should get one, including pregnant women. That's despite a recent study that suggested there might be a link between an increase risk of miscarriage and the flu shot.

"This was a very small study," says Dr. Baliga, "there were other studies that showed no such effect. At this time we believe from the CDC that should still get the flu vaccine."

For Jamie, she says getting a flu shot is a gift you not only give yourself, but also to those around you. "It's not that hard to do, it takes a couple of minutes."

Some flu facts from the CDC:

-You can't get the flu shot from the flu. Vaccines have dead or inactive viruses and are therefore not infectious.

-The flu is much worse than the flu vaccine. Particularly among young children, older adults, and people with certain chronic health conditions. Any flu infection can carry the risk of serious complications, hospitalizations or death.

-It takes 10-14 days for the body to be fully immunized from the vaccination.

-The vaccine is made up of three or four strains of influenza that the CDC thinks will be the most prevalent in the upcoming flu season. A lot of this is based on data from the southern hemisphere which has flu season in June, July and August.