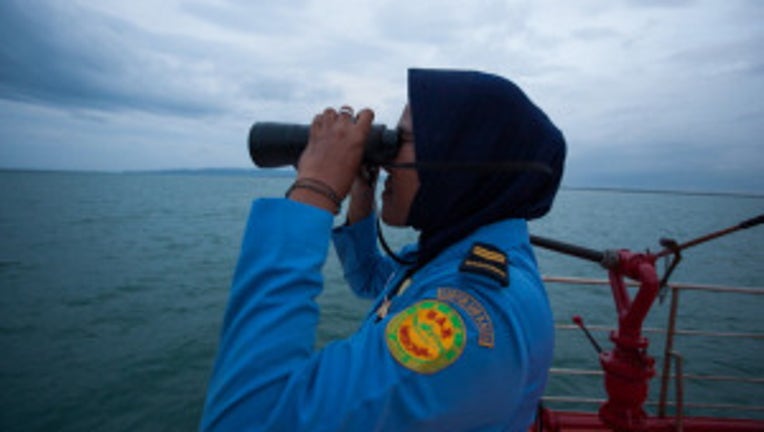 Kuala Lumpur, Malaysia (CNN) -- It may only be a few hours or a few days before the pingers that were aboard missing Malaysia Airlines Flight 370 stop transmitting for good.

The batteries are designed to last about 30 days after the devices on the flight data and cockpit voice recorders are activated.

And that 30th day has come -- though experts have said it's possible the batteries, if they were at full strength, could live several days longer.

There have been reports of possible audio contact -- two from a Chinese patrol ship and one from an Australian naval vessel -- in two search areas hundreds of kilometers apart.

In a sign that officials were encouraged by the discovery, a British navy ship equipped with advanced detection gear sailed to the area where a Chinese crew detected two pulses only 2 kilometers (1.25 miles) apart. The HMS Echo arrived early Monday morning (Sunday afternoon ET).

The urgent efforts to trace the signals came as a top official confirmed the missing plane's likely path on the night it vanished was suspicious.

A senior Malaysian government source told CNN that Flight 370 flew around Indonesian airspace after it dropped off Malaysian military radar. The plane may have been intentionally taken along a route designed to avoid radar detection, the source said.

Time is running out

The arrival of the Echo will be critical to the search for the missing Boeing 777 and the 239 people aboard. It has state-of-the-art sonar and is capable of mapping the ocean floor, which is about 4,500 meters (2.8 miles) deep in the focused search area.

It should be able to help determine more confidently whether the audio signals picked up on Friday and Saturday by the Chinese patrol ship Haixun 01 have any connection to the pingers from MH370.

In a case where promising discoveries seem to occur every day of the nearly monthlong search, officials urged caution.

"This is an important and encouraging lead, but one that I urge you to continue to treat carefully," Angus Houston, the head of the Australian agency coordinating search operations, said Sunday.

The Chinese said the electronic pulses were consistent with those emitted by pingers on an aircraft's black boxes, but search officials said they haven't been verified as coming from Flight 370.

Sounds travel long distances underwater, Houston said, making it difficult to ascertain their sources. If detectors were near a pinger, they would pick up the signal for a more sustained period.

Houston also said that search authorities were informed Sunday that the Ocean Shield, an Australian naval vessel equipped with sophisticated listening equipment, has detected "an acoustic noise" in another area of the ocean to the north.

The signals are the latest leads in a huge, multinational hunt for Flight 370, which disappeared almost a month ago over Southeast Asia. Investigators have so far been unable to say why the plane flew far off course or where it ended up.

The Ocean Shield, which has a high-tech pinger locator borrowed from the U.S. Navy, will continue to pursue the sound it heard. If that lead turns cold, it will move to the other detection area, a journey that will take at least a day, officials said.

"At the moment, the most promising lead appears to be the one associated with Haixun 01," Houston said at a news conference in Perth, the Western Australian city serving as a hub for search operations.

The pulses registered by the Chinese ship are of particular interest because they occurred in an area that fits with the latest calculation by experts of roughly where the plane is likely to have entered the water, Houston said.

The area of detection is roughly 1,600 kilometers (1,000 miles) west-northwest of Perth, according to coordinates reported by Chinese state media.

Several analysts on CNN said the information from search officials gave cause for optimism.

"We've got to be a little careful about groupthink here, but right now the evidence seems to point towards the Chinese vessel's location," said Alan Diehl, a former accident investigator for the U.S. Air Force.

What's more, a number of white objects were spotted floating on the surface of the water about 90 kilometers (55 miles) from where the sounds were detected, authorities said.

But Houston warned that the latest discoveries could turn out to have no connection to the missing plane.

"In the days, weeks and possibly months ahead, there may be leads such as the one I'm reporting to you this morning on a regular basis," Houston said.

"I assure that we will follow up and exhaust every credible lead that we receive," he said.

The Chinese vessel detected the second signal for a total of 90 seconds on Saturday, according to authorities.

"It's not a continuous transmission," Houston said. "If you get close to the device, we should be receiving it for a longer period of time."

A former longtime Navy oceanographer said the Chinese equipment shown on TV didn't appear to be very sophisticated. Van Gurley told CNN that the gear was designed to be held by human divers and only had short-range capabilities.

"The fact that they're deploying it right over the side near the ocean surface, they're getting hits a mile apart, kind of doesn't add up -- but it does require investigation," said Gurley, now a senior manager at a consulting firm that uses complex mathematical methods to solve problems like finding a missing plane.

Australian authorities are still working on understanding the technology used regarding the data generated by the Haixun 01 as it searches for the missing plane, a source with the Australian Defense Force told CNN.

Plane said to have flown around Indonesia

Authorities say Flight 370 ended up flying south over the Indian Ocean after it dropped off military radar off the west coast of peninsular Malaysia on March 8. The conclusion is based on an expert analysis of satellite, radar and other available data.

More detail has been added to the flight path calculated by investigators, a senior Malaysian government source told CNN on Sunday.

After reviewing radar track data from neighboring countries, officials have concluded that the passenger jet curved north of Indonesia before turning south toward the southern Indian Ocean. Its path took it around Indonesian airspace.

Malaysian government officials have said previously that the plane appeared to have been deliberately diverted from its original course, which would have taken it north to Beijing.

"What's also interesting about this route ... is it appears it goes to the designated waypoints that we (pilots) use (and air traffic control uses to give directions)," said CNN aviation analyst Miles O'Brien. "This particular route that is laid out happens to coincide with some of these named intersections. So what it shows is an experienced pilot somewhere in the mix on this."

O'Brien said that an experienced pilot who had flown in the region would know where radar coverage begins and ends and where radio communication handoffs occur.

He said he was not pointing to any particular individual, as there are several possible scenarios on what may have happened in the cockpit, including a hijacking by someone who knew how to fly a commercial jet.

Investigators haven't yet said who they think might have flown the plane off course or why. They also haven't ruled out mechanical problems as a possible cause of the plane's diversion.

So far, no physical evidence of the plane's eventual whereabouts has been found, leaving many relatives of those on board trapped in uncertainty.