The 18-year-old student accused of injuring four people in a shooting at Timberview High School in Arlington was released from jail Thursday afternoon.

ARLINGTON, Texas - The 18-year-old student accused of injuring four people in a shooting at Timberview High School in Arlington was released from jail Thursday afternoon.

Timothy Simpkins kept quiet after posting bond. He did not respond to reporters when asked if he had anything to say to his family or those who were wounded.

The Timberview High School senior is charged with three counts of aggravated assault with a deadly weapon.

He walked to the Pretrial Release Department, surrounded by family and friends, so he could be fitted with an electronic leg monitor and given his conditions of bond.

Simpkins was arrested Wednesday after police said he opened fire inside Timberview High School following a fight with another student.

The 18-year-old student accused of injuring four people in a shooting at Timberview High School in Arlington was released from jail Thursday afternoon.

Four people were hurt in the shooting including two teachers and two students. One 15-year-old boy, identified as Zaccaeus Selby by a GoFundMe post, was critically injured, another student was grazed by a bullet, and a teacher, identified by students and sources as Calvin Pettit, was shot.

In a GoFundMe page posted to raise money for Selby’s medical bills, the organizer described him as a "bright and respectful" boy, and said, in part, "This innocent 15 year old did not bully Tim."

Arlington police said officers found other weapons in the family's home and believe they found the .45 caliber gun Simpkins used during the shooting on campus.

The Timberview High School senior is charged with three counts of aggravated assault with a deadly weapon.

In an interview on Good Day, Kolbye said the .45 caliber weapon found on a street in Grand Prairie has been linked to the shooting on the second floor in the classroom at the high school.

"ATF has done forensics and has matched that weapon with the casings that were found in the school," he said. "We are at a high confidence degree we have found the weapon that was used."

The family of the school shooting suspect said he was bullied. That's going to be part of the police investigation. Good Day talked to Arlington PD Asst. Chief Kevin Kolbye about the case and what police know so far.

The arrest affidavit states: "The witness intervened, breaking up the fight Simpkins was involved in. The witness was able to control the other individual involved in the altercation. This individual gave up and stopped being combative. When the witness turns around to check on Simpkins, Simpkins has produced a firearm."

Several teachers and coaches were involved in breaking up the fight, including Pettit, who ended up getting shot.

Simpkins’ family claims he was being bullied and trying to protect himself. They said there are documented reports of ongoing incidents between him and other students.

The family's representative said that due to all the media attention, the Simpkins family is now concerned for their own safety.

"My sympathy goes out to the other families that was, you know, hurt," Timothy’s grandmother, Lillie Simpkins, said.

She helped raise him, and she blames what happened on his being bullied.

"I baptized him. I dedicated him. He’s a good child. He’s my godson," the family’s paster, Chris Taylor, said. "We’re going to keep praying for the families and support everybody in this dilemma."

Kolbye said the bullying claims will be investigated.

"We're going to be looking into any allegations of bullying, basically his past history, the school history," he said. "But even if you're bullied, there are other options besides carrying a gun into a school and using a gun in a situation like that. That's just not acceptable."

Kolbye also had a message for Mansfield ISD school security.

"I think Mansfield ISD needs to reevaluate some of their safety measures, needs to look at some history. I will tell you, that over the past few years, we have seen an increase in our youth, in Arlington and other cities too, carrying weapons," he said. "And we just can’t stress enough that today, young people carrying weapons is just not a solution to any type of violence or anything like that."

FOX4 reached out to Mansfield ISD to address bullying claims from the Simpkins’ family.

A spokesperson says the district can’t release specific details about the investigation, but said, in part:

"Every report that we receive of a potential bullying situation is thoroughly investigated and goes through the proper processes in order to assess and determine the appropriate consequence."

RELATED: Family of Timberview High School shooting suspect says he was being bullied

Before he was released, Simpkins’ family prayed for him, those who were wounded and for Mansfield ISD to address the issue of bullying in schools. 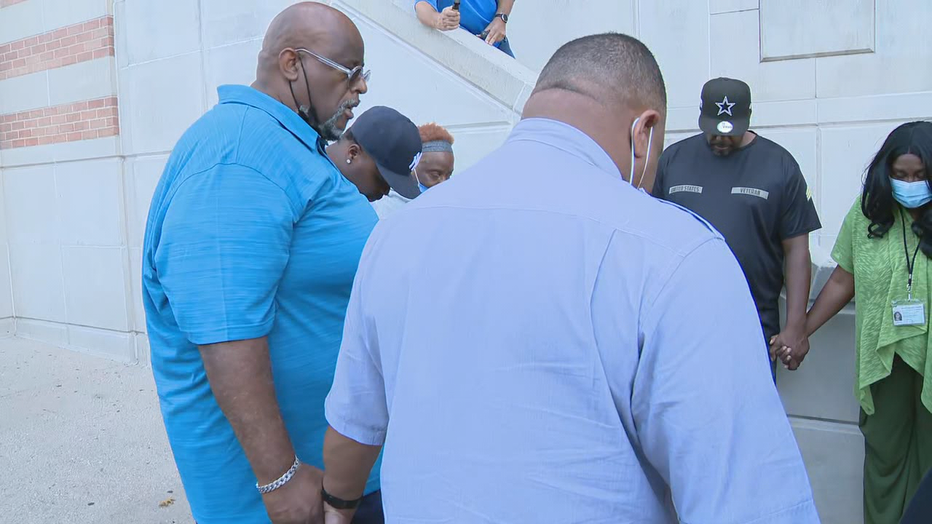