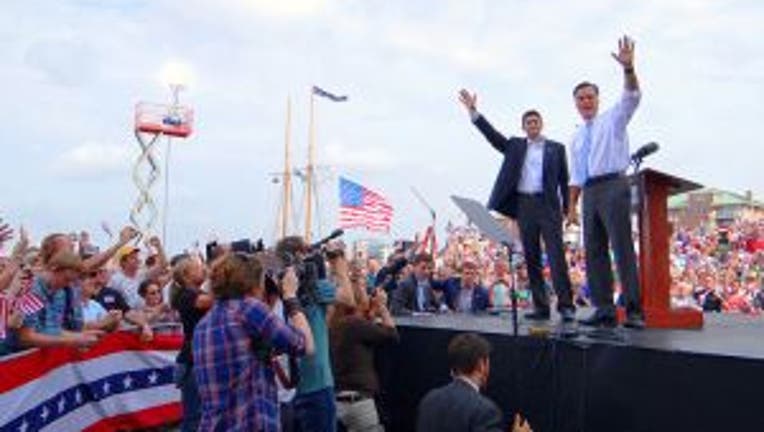 
After billions of dollars spent, more than a million advertisements aired and hundreds of thousands of new voters registered in key states, this is how close elections are won: volunteers amped up on too much coffee and too little sleep, trudging from door to door, desperately seeking one last voter.

For the third time in four elections, the margin between the winner and loser in a presidential campaign seems on track to be less than 2.5 percentage points. Final polls released Sunday showed the national vote close, with President Obama holding a small edge over Republican Mitt Romney both in the popular vote and in most hotly contested states.

The candidates spent Sunday swooping through swing states, making their final pitches to voters — Romney in Pennsylvania and Virginia, Obama in New Hampshire and Colorado and both men in the two biggest swing states, Florida and Ohio. But as Obama told a crowd in Virginia on Saturday night, at this point in the race, the two of them are little more than "sort of a prop in the campaign." Not much that a candidate could say at this point would be likely to sway voters.

Instead, for all the campaigns' reliance on modern technology and the newest techniques in micro-targeting, both sides have responded to the nation's increasingly polarized politics by going back to the oldest of political techniques — knocking on doors. For the final three days of campaign 2012, that unglamorous, ground-level effort to get out the vote matters deeply.

On Sunday, both sides marshaled armies in the handful of states on which the presidency rides. In Virginia suburbs, Romney volunteers gathered at a phone bank to call supporters and wavering voters. In Ohio, Obama staff distributed pizza to people waiting in long lines at early voting stations. Chicago-area college students rode buses north to Wisconsin to help. Across the battleground states, Obama aides say they have set up 5,117 staging areas in homes, garages and community halls for volunteers to work from; Romney campaign officials insist their smaller operation will pack more punch.

The effort to find and encourage voters took many turns. In Florida, where litigation Sunday over early voting snafus brought unwelcome reminders of the contested election of 2000, Wanda Ramos spent the morning assisting voters at an Orlando polling place where a judge had ordered additional hours of early voting to make up for time lost Saturday to a bomb scare.

"Whatever's needed, I'm going to be doing it," she said. Ramos, 47, an administrative assistant at a marketing company, began volunteering for Obama in the last campaign and never stopped. For four years, she has advocated the president's policies to her neighbors, knocked on doors, made phone calls and, more recently, driven early voters to the polls.

"It's exciting to see history happen and to be part of that history," she said.

In Evergreen, Colo., Judy Merkel, 67, would sympathize with the sentiment, if not the candidate. Merkel has volunteered for Romney since July. These days, she gets to bed most of the time at 2 a.m. after a calming cup of herbal tea and a bowl of oatmeal. Strong coffee gets her going again in the morning.

George W. Bush's reelection campaign in 2004 set the standard for get-out-the-vote efforts, producing huge turnouts among Republicans in Ohio, Florida and other key states. Then, in 2008, "we ran out of gas" with the John McCain campaign, said Brett Doster, who is now Romney's senior advisor in Florida.

With far more money at their disposal this time around, Republicans and allied conservative groups vow they will keep pace with the Democrats and their union allies. Americans for Prosperity, a group financed by the billionaire Koch brothers, plans to spend $140 million this year with a little more than half going to advertisements and much of the rest to get-out-the-vote operations.

In Virginia, where a recent Washington Post poll showed that 43% of likely voters already had been contacted by Obama's campaign and 40% had heard from Romney's, Republicans say they have made 5 million voter contacts. On Sunday, 30 volunteers gathered at a town house in Fairfax, in the Washington suburbs, to re-contact supporters and urge them to the polls.

"You see the enthusiasm on our side this time. You see it in the number of volunteers going door to door, the yard signs, people talking to the neighbors," said Mike Belefski, 62, a retired social studies teacher from Fairfax Station.

Belefski had spent Saturday afternoon walking door to door in Loudoun County, near Dulles International Airport, in some of the most closely contested swing turf in the state. In the town of Ashburn, he said, he encountered a rare undecided voter, an unmarried woman he thinks he may have won over, although she described herself as "pro-choice."

"We convinced her that jobs and the economy are more important than social issues," he said, hopefully.

But the Sunday morning calling also illustrated the frustrations of the work. Many voters, bombarded by calls, have stopped picking up their phones. The volunteers often went minutes at a stretch with no one answering. Voters who did pick up often hung up immediately.

Obama campaign officials say that's why they have put greater emphasis on door-to-door canvassing, although they also have made millions of calls, distributing phone numbers of voters by email to volunteers who agreed to make calls from their homes.

The Democrats scoff at Republican claims of on-the-ground parity, insisting that the nature of their volunteers will give them an edge. Many have worked in their communities for a year or more with some, like Ramos, on the job continuously since 2008, said Jeremy Bird, the campaign's national field director. An organization that uses local volunteers to canvass neighbors — first registering them, then getting them to the polls — has an advantage that newcomers will not be able to match, he and other campaign officials insist.

"There are homes we've been to every week since April or May," said Elena Squarrell, 28, the Obama campaign's neighborhood team leader for a nine-block area near downtown Denver, her native city. "We know a lot of the people, so they feel comfortable" asking questions or expressing worries about voting procedures. "We're really able to help."