OKLAHOMA CITY - A federal judge in Oklahoma on Friday resentenced "Tiger King" Joe Exotic to 21 years in prison, reducing his punishment by just a year after an appeals court ordered a new sentence.

Exotic, whose real name is Joseph Maldonado-Passage, was prominently featured in the popular Netflix documentary "Tiger King: Murder, Mayhem and Madness" — a breakout series for Netflix during the early weeks of the COVID-19 pandemic while people were forced to stay home.

Maldonado-Passage was sentenced in January 2020 to 22 years in prison after he was convicted of trying to hire two different men to kill animal welfare activist and fellow "Tiger King" star Carole Baskin — his chief rival who runs a rescue sanctuary for big cats in Florida. Baskin was not harmed.

In July, a three-judge panel for the U.S. Court of Appeals for the 10th Circuit in Denver found that the trial court wrongly treated his two convictions separately in calculating his prison term under sentencing guidelines.

The panel agreed with Maldonado-Passage that the court should have treated them as one conviction at sentencing because they both involved the same goal of killing Baskin. According to the ruling, the court should have calculated his advisory sentencing range to be between 17 1/2 years and just under 22 years in prison, rather than between just under 22 years and 27 years in prison.

The former Oklahoma zookeeper also was convicted of killing five tigers, selling tiger cubs and falsifying wildlife records. He has maintained his innocence since the April 2019 conviction. 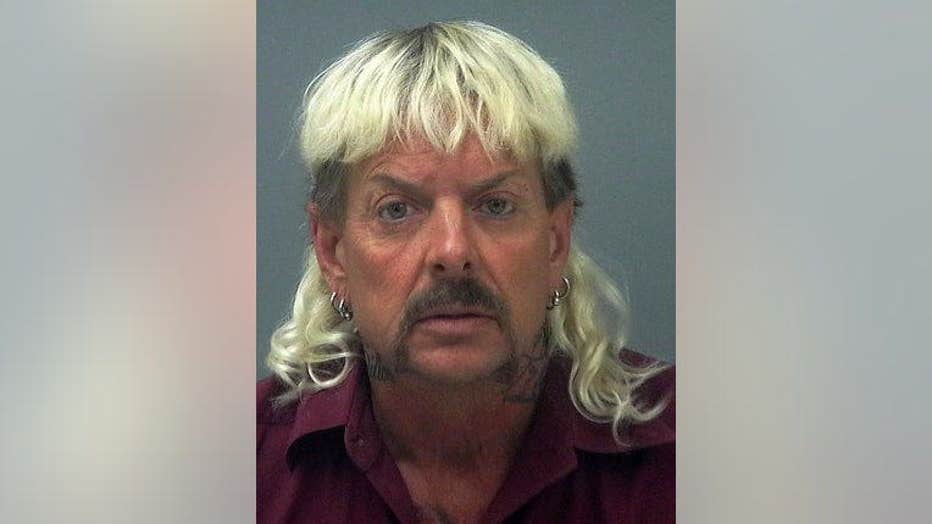 Maldonado-Passage was expected to attend Friday's sentencing in Oklahoma City after a judge approved his transfer from a federal medical center in Butner, North Carolina. He previously revealed that he has an "aggressive" form of prostate cancer, and his attorneys said he was delaying treatment until after his resentencing.

Prosecutors said Maldonado-Passage offered $10,000 to an undercover FBI agent to kill Baskin during a recorded December 2017 meeting. In the recording, he told the agent, "Just like follow her into a mall parking lot and just cap her and drive off." Maldonado-Passage’s attorneys have said their client — who once operated a zoo in Wynnewood, Oklahoma, about 65 miles south of Oklahoma City — wasn’t being serious.

His attorneys are asking for a lesser sentence than what the guidelines call for, alleging "imperfect entrapment, sentencing manipulation, and outrageous government conduct."

"From decisions made in the initial stages of the investigation to charging decisions to overzealous sentencing recommendations, one thing remains clear: this case was about doing whatever it took to put Mr. Maldonado-Passage behind bars for as long as possible," his attorneys wrote in a sentencing memorandum.

Federal prosecutors said in court records that they would defer recommending a new sentence for Maldonado-Passage because of the allegations he raised.

"In the unlikely event that any of these claims withstand scrutiny and ultimately are determined to be credible, those developments could impact the United States’ ultimate sentencing recommendation" because the prosecutors are obligated to investigate them, U.S. Attorney Robert Troester wrote.

Maldonado-Passage’s team had previously sought a pardon from former President Donald Trump but did not receive one before Trump left office. His team was so confident in his chances that they had readied a celebratory limousine and a hair and wardrobe team to whisk him away from prison.

"Tiger King" became a cultural phenomenon after its release. Its popularity also drew attention to Baskin, who became a household name and claimed Netflix blindsided her by its portrayal of her.

Baskin had tried to shut Maldonado-Passage’s Oklahoma zoo down, accusing the facility of abusing animals and selling big cat cubs. In retaliation, he raised questions about the disappearance of Don Lewis — Baskin’s former husband.

The documentary extensively covered Maldonado-Passage’s repeated accusations that Baskin killed her husband and possibly fed him to her tigers. Baskin, who founded Big Cat Rescue, has never been charged with any crime and released a statement refuting the accusations made in the series.

Meanwhile, Netflix recently released the second season of Tiger King, in which Baskin attempted to file a restraining order to delay and prevent its release. Baskin alleged that she only signed release forms for season one of the show and didn’t want to participate in the sequel, according to FOX 13 News, citing court documents. Her legal team called for Netflix to remove all footage of her from the second season before it aired.

However, a judge later denied the restraining order, stating that "the Court is not convinced at this juncture that the Baskins’ anticipated injury — including injury to their reputations — if the previously obtained footage of them is used in the new documentary qualifies as irreparable."