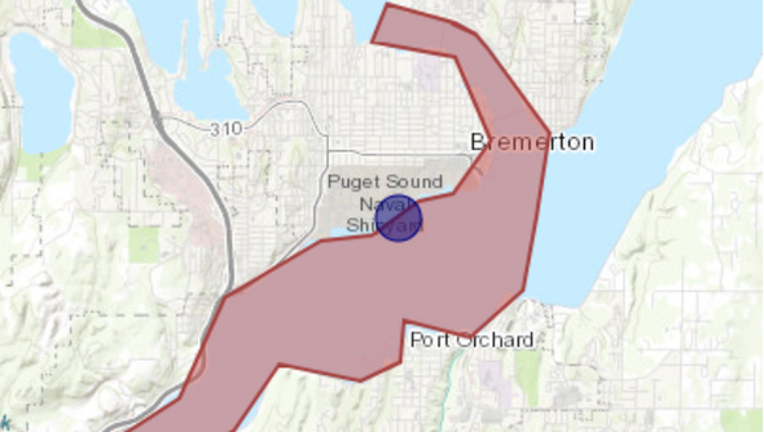 About 4,000 gallons of sewage spilled into Puget Sound March 2 and 3, officials said.

The Navy said the spill happened after a pressure sensor broke. It says the leak was thought to be seawater and the spill was mistakenly diverted to Sinclair Inlet.

The Kitsap County Health District said the affected area is Sinclair Inlet and the head of Port Washington Narrows up to Lions Park.

"During a no-contact advisory, the public is advised to avoid contact with the water in the affected area. This means the District recommends against swimming, wading, or types of water recreation or play where water could be swallowed or get in the mouth, nose or eyes," the district said in a news release. "People should also avoid direct skin contact if possible, and immediately wash with soap and water if they have exposure to the water. Signs have been posted at locations around Sinclair Inlet and the head of Port Washington Narrows, up to Lions Park.

Officials said to avoid contact with the water through Sunday, March 10.

An official with the Environmental Protection Agency said the recent problems sewage spillage at the shipyard are due to aging an aging sewer infrastructure.  The official said the EPA is working the the Navy on a long-term fix.

Back in January, Washington state Attorney General Bob Ferguson said the U.S. Navy dumped hazardous waste, including copper and zinc, into Puget Sound and must be stopped from doing it again. Ferguson’s office notified the Navy of the state’s intent to join a suit in federal court to ask the Navy to clean up the mess and to require it to stop scraping ships at Navy Base Kitsap and dumping the material in Sinclair Inlet.

Ferguson says while cleaning a decommissioned aircraft carrier in January 2017, the Navy dumped scraped-off paint into Sinclair Inlet, in violation of state and federal laws.

Ferguson says marine life, including salmon, is at risk because of the Navy’s practices.

The Suquamish Tribe issued a statement Wednesday calling for action after the latest spill.

It said in part, "The Navy must put proper measures in place to prevent this kind of dangerous and damaging pollution."

Full statement from the Navy:

"Less than 4,000 gallons of domestic wastewater spilled into Sinclair Inlet between 1:30 p.m. Saturday and 3 p.m. Sunday when a pressure sensor broke off a water line at Dry Dock 6 in Puget Sound Naval Shipyard & Intermediate Maintenance Facility in Bremerton, Washington. The spill lasted for slightly more than 24 hours because the mechanic who initially responded to the broken pressure sensor on Saturday believed the leak was from a normal saltwater line and diverted the spill into a dry dock service galley which pumped into Sinclair Inlet. On Sunday, shipyard personnel discovered that the leak did not originate from a saltwater line and could contain wastewater. Out of an abundance of caution, they shut down the pump to contain the spill. The following morning (Monday), shipyard personnel confirmed that the spill had contained wastewater that back-flowed into the line due to a loss of pressure.

"PSNS & IMF takes its responsibility to protect the environment very seriously and will conduct a full investigation into the cause of the spill and the steps taken once it was discovered. In addition, the shipyard has notified state and local officials of the spill and will continue to provide them with information as needed."