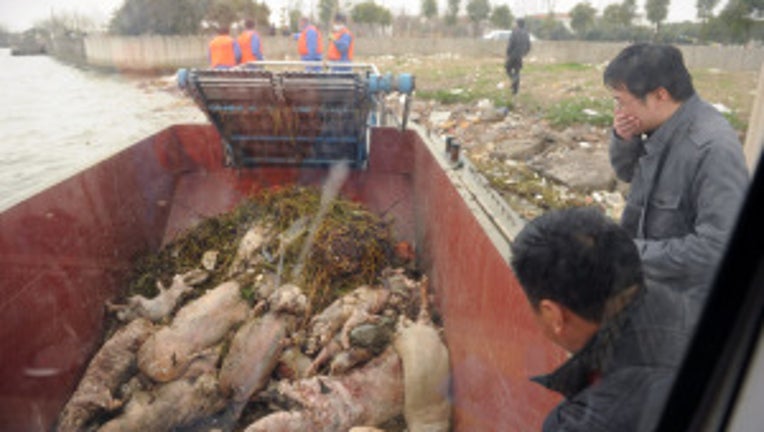 Thousands of dead pigs have been found in the Huangpu River since last week. A report on the Chinese news portal Xinmin.cn, said that 3,323 dead pigs had been found through Sunday night.

Shanghai authorities said they believed flotilla of pigs came from neighboring Jiangsu and Zhejiang provinces and had been dumped in the river after they died. More than 20,000 pigs are reported to have died since the beginning of this year in Jiaxing alone, where a pig breeding facility is located about 50 miles to the west of Shanghai at the upper reaches of the Huangpu River. Some of the pigs had ear tags identifying them as coming from Jiaxing.

According to environmentalists, it is illegal for farmers to dump dead animals in the river, but the practice remains common.

“This is obviously threatening the local water resources,’’ said Ma Jun, a leading environmental expert. “Usually, we see dead livestock in the river during the flooding season, but this a different case and the numbers are large.’’

Shanghai authorities have sent out patrol boats to collect the pig carcasses from the river in Songjiang, a neighborhood of Shanghai to the southwest, before they can drift into the city center.

The Shanghai Agricultural Commission said that at least one pig tested had died of porcine circovirus type 2, but that the virus did not present a risk to human health or threaten the drinking water.

The dead pigs, however, add to the pressure on Chinese authorities who are facing criticism over their failure to rein in environmental abuses.

"Ever since saw the news about the dead pigs, I feel sick whenever I eat or drink," wrote Zhao Chu, a microblogger. “I feel so sad as a Chinese person.”

Another suggested waggishly on a Sina.com microblog, “Perhaps these pigs committed suicide together because they were unhappy about the bad pollution.’’