A few of the nation’s top teams battle as the college football season heads into Week 8 this weekend. 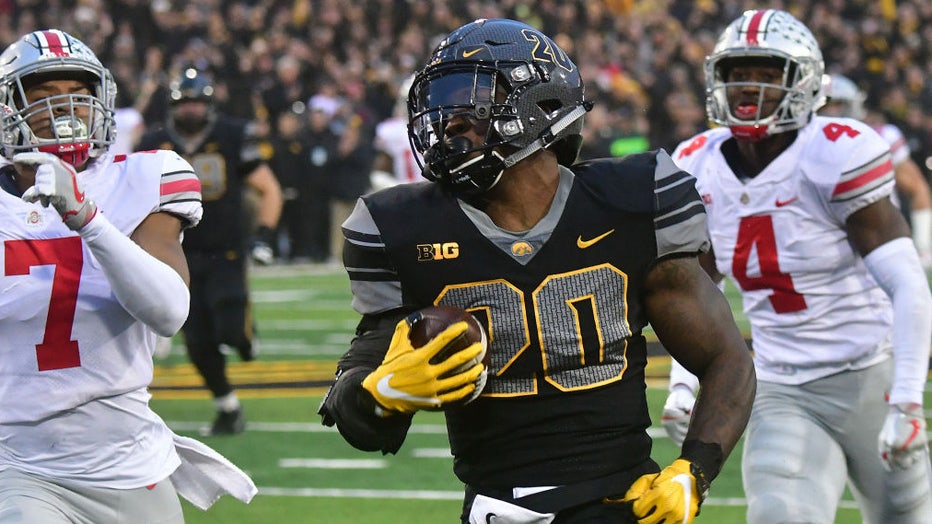 FILE-Iowa Hawkeyes' running back James Butler (20) runs the ball during a Big Ten Conference football game between the Ohio State Buckeyes and the Iowa Hawkeyes in 2017. (Keith Gillett/Icon Sportswire via Getty Images)

No. 2 Ohio State and Iowa are both coming off a bye week and look to get back on track in their matchup. Iowa will be the first defensive test for an Ohio State offense that has played well this season.

Quarterback C.J. Stroud is one of the favorites to win the Heisman Trophy and he hopes to continue his stellar play against an Iowa defense led by linebacker Jack Campbell, the 2021 national tackles leader and AP preseason All-American.

Ohio State is second in the nation in total yards, averaging 543.7 per game, behind Tennessee (551). The Buckeyes are first in the nation with 25 passing touchdowns, 41 total TDs, and an average of 48.8 points per game.

Iowa’s defense has allowed 10 points or fewer in five of the team’s first six games – a first for the program since 1933. The Hawkeyes are also one of the least penalized teams in the nation, ranking ninth in fewest penalty yards (241) and 15th in fewest penalties (30).

No. 9 UCLA and No. 10 Oregon have strong rushing attacks: The Ducks rank atop the league with an average of 241.7 yards a game, while UCLA is second with 211.5 per game.

And this game likely will come down to rushing defense, an area where both teams excel. Oregon is allowing just 99 yards a game while UCLA is averaging 98 per game.

But the quarterbacks are the players to watch in this matchup.

UCLA quarterback Dorian Thompson-Robinson has the school record for passing touchdowns with 76 and he leads the nation with a completion percentage of 74.8.

But Oregon QB Bo Nix is also having an excellent season. The Ducks' signal-caller has thrown for 12 touchdowns and rushed for eight. Nix is one of 12 Power 5 QBs to have as many passing and rushing scores through six games. His eight rushing TDs are second-most in the Pac-12.