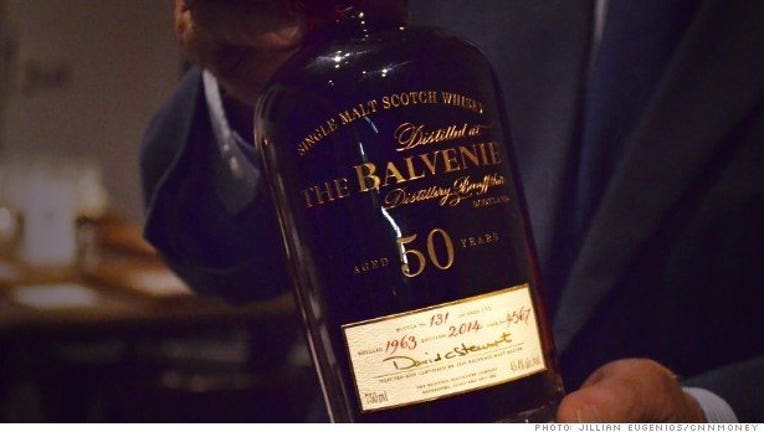 A limited number of Balvenie Fifty bottles exist, and come with a suggested retail price of $38,000.

NEW YORK -- In 1963, whisky makers at a distillery in Scotland filled up a cask and sealed it with the knowledge it would not be opened again for 50 years.

Its contents have been watched over for the last half century by David Stewart, a highly respected whisky master for Scotland's Balvenie distillery. The cask was recently opened and bottled, and its contents are now available for purchase. A limited number of Balvenie Fifty bottles exist, and come with a suggested retail price of $38,000.

"It's spicy," said Stewart, as he swirled a taste of it in his glass and breathed it in. "There's ginger, nutmeg, dried fruits and dates."

His nose knows, and he's spent his life mostly smelling whisky rather than tasting it. Smell is a vital part of his job, and a large part of what makes him the malt master. He's only the fifth person to hold that job in Balvenie's 125-year history. "We last a long time in the company," he said.

The company is known for its handcrafted spirits. Part of what drives the price is the way the whisky is made, which hasn't changed much in the last century. The barley is still malted in-house, and Balvenie is only one of six distilleries with its own malting floor out of the 100 or so distilleries in Scotland.

That keeps the quality controlled, and means the distillery is only getting barley from the local farms around it, some of which have supplied the company for decades.

That's not all that gives the Balvenie Fifty its eye-popping price tag. It's special -- and expensive -- because of its rarity, partly due to the fact that the yield from each cask isn't that high.

A cask usually yields about 400 bottles. The cask that held the Balvenie Fifty only yielded 131, and there are only 15 of the bottles available in the United States.

The low yield is because over time, whisky in the cask evaporates. It can lose its alcohol content too, which isn't good -- a whisky has to have an alcohol content of at least 40% to be labeled Scotch whisky.

"We got lucky it stayed above strength," Stewart said. He spent the last decade keeping an extra eye on the alcohol content tests. "It's about patience. If anything, you're doing experiments."

And while the experiments sometimes take place in the distillery's laboratory, Stewart prefers to keep it old school. "The nose always gets the final say," he said.