Her boyfriend, 23-year-old Austin Faircloth -- pictured below with Lines -- is still on the run and has several warrants for his arrest. 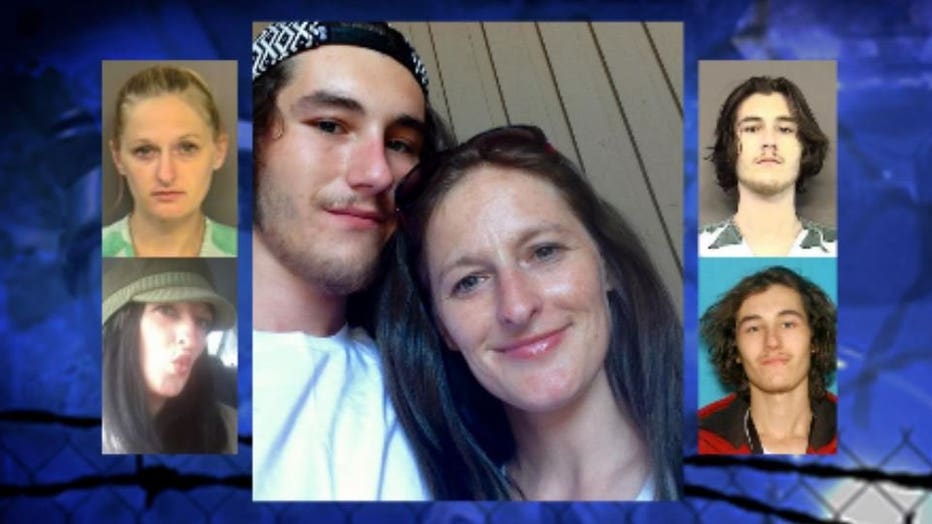 She is being held in the Snohomish County jail. One of her alleged victims is Wendy Hays. She spent more than a year trying to clear her good name after Kirkland Police say Lines stole her identity “Things that you’ve worked for your whole life seems to like disappear because someone in a blink of an eye has taken your credit and invaded your world,” said Hays. When I told her of the arrest this morning, she was overjoyed. "This is amazing. Thank you!" she said.

Another alleged victim is Stanwood mom Renae Topham who is still dealing with the financial wreckage left behind after detectives in the Snohomish County Property Crimes Unit say Lines stole her identity and charged up her accounts at two stores. "It's just weird because she has all of my information. She's pretending to be me. She knows actually where I live and everything,” said Topham.

Lines is scheduled to make a first appearance in court Friday afternoon. Her boyfriend, 23-year-old Austin Faircloth, is still on the run and has several warrants for his arrest. If you know where he is, submit the information via the P3 Tips App to Crime Stoppers or call 1-800-222-TIPS (8477).

FUGITIVES UPDATE November 11, 2016 --
There is now a warrant for Kimberlee Lines' boyfriend as well.

Austin Faircloth has a Snohomish County warrant for identity theft as well as one for possession of a dangerous weapon. He also has multiple charges in Marysville and Federal Way.

Detectives say the accused criminal couple has been spotted in Everett.

Detectives say Lines has also been seen in Arlington and Lake Stevens, but they could be anywhere in Western Washington.

If you can tell Snohomish County detectives where to fin them, call the Crime Stoppers hot line anonymously at 1-800-222-TIPS. There is a cash reward of up to $1,000 per fugitive if your information leads to their arrest.

Detectives want your help tracking down suspect 38-year-old Kimberlee Lines, who was first arrested in 2015.  Now, she has multiple warrants for fraud and ID theft along the I-5 corridor.

“No, it was not on my radar. I didn’t expect it to happen to me; other people, but not me,” said identity theft victim Wendy Hays, of Kirkland.

That’s until Hays got a phone call from an outdoors store in May 2015.

“As soon that first phone call came, it flooded. All of a sudden I’ve got cards from people, credit cards and phone calls asking when I was going to make payment. It was a whirlwind,” said Hays.

Wendy learned someone stole her identity.  She spent more than a year trying to clear her good name.

“Things that you’ve worked for your whole life seems to like disappear because someone in a blink of an eye has taken your credit and invaded your world,” said Hays.

Police say it's all thanks to Lines.

Police say she casually walks  from store to store and racks up thousands of dollars in merchandise, all while pretending to be someone else and using their credit cards.

Police say Lines admitted to being in an identity theft ring with someone at a doctor or dental office feeding the crooks patients' personal information.  Patients like Wendy Hays, who’s now buried in paperwork and bad credit.

“I had to cut off my credit. I had to lock it so now I can’t do anything freely without having to take extra steps to do something I should be able to do,” said Hays.

Every time Hays wants to buy something, it costs $10 to unlock and re-lock her credit.  She says it’s a constant nuisance for her and it also adds up.

“We’d like to get her (Lines) in custody to account for the victims that we’re not aware of and hopefully once in custody we can stop the trend she has going,” said Maples.

Hays says she tells everyone to get identity theft protection.  Not just an alert system, but a company that will help you clear your good name if this happens to you.

If you know Kimberlee Lines or believe you may have seen here, call Crime Stoppers anonymously at 1-800-222-TIPS.  If you have a tip that leads to her arrest, you could get up to a $1,000 reward.