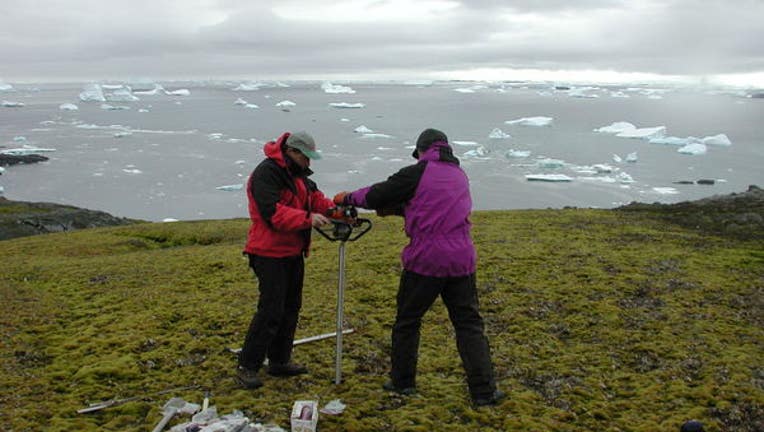 Researchers drill into the moss banks of Signy Island, part of a group of remote islands off the Antarctic Peninsula. (Peter Boelen via Los Angeles Times)

In what they are calling the most extreme case of frozen plant regeneration ever documented, scientists are claiming to have regrown shoots of Antarctic moss that were trapped beneath layers of ice and frost for more than 1,500 years.

In a paper published Monday in the journal Current Biology, scientists from the British Antarctic Survey and the University of Reading, in England, said the regrowth occurred in a core sample taken from a gigantic bank of moss on remote Signy Island.

"These mosses were basically in a very long-term deep freeze," co-author and terrestrial ecologist Peter Convey wrote in a statement. "This timescale of survival and recovery is much, much longer than anything reported for them before."

Cryptobiosis is a term meaning "hidden life" and describes the ability of some invertebrates, plants and microbes to enter a state of suspended animation when faced with environmental extremes, such as intense cold or lack of moisture.

Many scientists have believed that cryptobiotic organisms could survive in such a state for no more than a couple decades.

"Here we show unprecedented millennial-scale survival and viability deep within an Antarctic moss bank preserved in permafrost," Convey and his colleagues wrote.

The moss, Chorisodontium aciphyllum, can grow into high banks more than 9 feet tall in the maritime Antarctic. New growth occurs at the surface, while lower levels become part of the permafrost, researchers say.

During a visit to Signy, researchers used a special drill to remove a roughly 1-inch-wide and 4 1/2-foot-long core sample of moss and transported it to the University of Reading for analysis.

Researchers radio-carbon dated moss shoots at the base of the sample and said they were found to be 1,533 to 1,697 years old. They also placed sections of the core sample under growing lamps and misted them with water. Each showed new growth, but at very different rates, researchers said.

"The length of time required before growth became visible increased with depth," authors wrote. After 27 days, growth was visible at more than three inches of depth; after 40 days, growth began around one foot of depth; and after 55 days, growth appeared around three feet of depth.

Surprisingly, however, growth at the very bottom of the core sample became visible after just 22 days, authors wrote.

"The potential clearly exists for much longer survival," authors wrote.