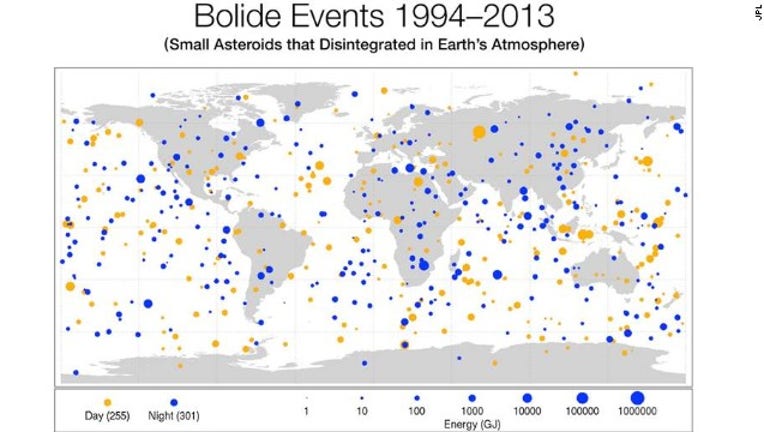 NASA map shows the number of asteroids striking Earth's atmosphere over a 20 year period, creating bright meteors or fireballs. Technically they asteroids are called "bolides." The map also shows where they hit and that they ranged in size from 3 to

(CNN) -- Fiery asteroids smash into Earth's atmosphere at such a stunning rate, it's a wonder we don't see fireballs raining down from the skies more frequently.

A new NASA map from the space agency's Near-Earth Object Program, reveals that more than 556 space rocks smashed into the atmosphere over a 20-year period between 1994 and 2013.

The good news is most are small and harmless fireballs that disintegrate when they hit the atmosphere, the space agency said in a press release.

An obvious exception occurred on February 15, 2013, when an asteroid as large as 55 feet in diameter with a mass of up to 10,000 tons crashed to earth in the Urals region in Russia, streaking through the morning sky in Chelyabinsk before landing in a fiery explosion that injured more than a thousand people and caused an estimated $33 million in damage.

NASA said the Chelyabinsk asteroid was the largest to hit the Earth during the agency's mapping period.

Asteroids are defined by NASA as rocky bodies in space that orbit the Sun. Some of them are large enough to be considered minor planets. When pieces of an asteroid or comet break off from the main body, they're referred to as meteroids. A meteor is actually the light that is seen in the sky when a meteoroid enters Earth's atmosphere. A meteor shower is seen when lots of these smaller particles fall to Earth. According to NASA, meteroids are usually small, but can range "from dust particle to boulder size."

The NEO Program helps detect and track space rocks that could cause a potential danger to Earth.

"The new data could help scientists better refine estimates of the distribution of the sizes of NEOs," NASA explained. "Finding and characterizing hazardous asteroids to protect our home planet is a high priority."

The space agency has increased its efforts at finding and tracking potentially dangerous space objects with the idea of developing ways to protect the Earth from one, should it ever become necessary.

NASA is also developing an Asteroid Redirect Mission called ARM. In a plan that sounds a lot like science fiction, NASA wants to redirect a space rock into orbit around the moon by the 2020s so astronauts can study it more closely. The mission could also help develop ways to deflect an asteroid should one be found on a collision course for Earth.