BRUSH PRAIRIE, WA (KPTV) --Employees at a ranch in Washington are trying to figure out who broke into a barn and stole a six-wheeler that's worth thousands of dollars.

The break-in happened sometime between 5:30 p.m. Wednesday and 8 a.m. Thursday at the Silver Buckle Ranch along Northeast 152nd Avenue in Brush Prairie, Executive Director Cathi Wright said. All the doors had been closed and locked on the storage barn where the ranch's hay, tools and other equipment are kept, she added. An employee realized someone broke into the barn when they arrived at work. 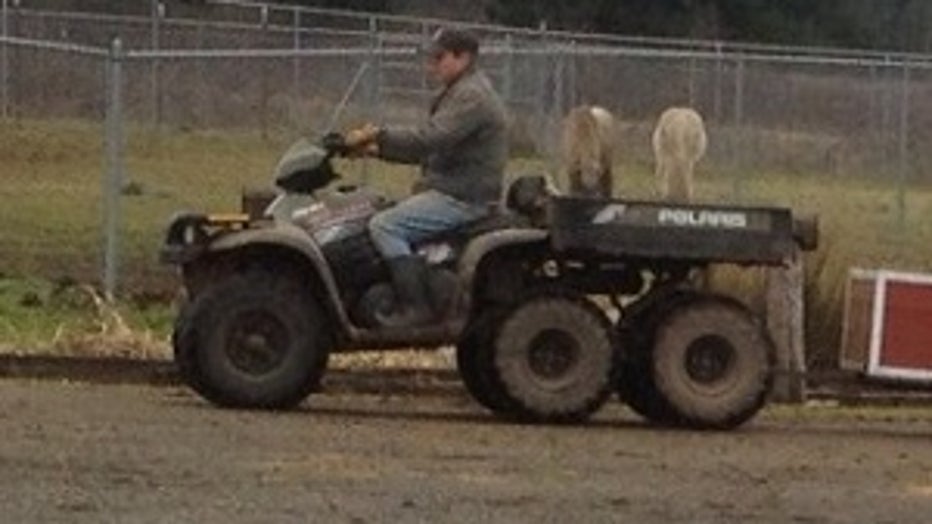 Wright said the thief or thieves stole a 2006 Polaris sportsman-model six-wheel ATV that had been donated to the ranch about a year ago, a battery charger and some extension cords that were on the ground.

"We don't know who did it, but it obviously seems like somebody knew it was here. So someone had to have been to the ranch to know it was here," Wright said.

A bunch of tools that were inside the barn were never touched, Wright said.

"If they wanted to steal stuff, they could have easily thrown it in the back of the vehicle when they drove out of here and taken that, too," she said.

Wright said he believes the thief drove the six-wheeler from the storage barn and out a front gate that hadn't been used since October. The gate is secured with a padlock. It was wide open when an employee arrived for work on Thursday morning, Wright said. There also appeared to be fresh tire tracks on the ground near the gate, she added.

The ranch offers programs year-round that help improve mental, emotional and physical health for kids and families, according to its website.

Employees used the six-wheeler to feed horses, do maintenance work and give train rides to kids, Wright said. As a nonprofit organization, the ranch doesn't have an extra $10,000 in its budget to replace the six-wheeler, she added.

"We're trying to bring the kids out here for free. And cover their ... raise money for scholarships so they can come here," Wright said. "So then to have a piece of equipment that we can't afford to go out and buy another one now, you know, stolen ... it's very disappointing."

Employees plan to have a more permanent lock installed on the storage barn on Friday. They might add more lights or other security measures around the property in the future, Wright said.

So far, investigators don't have any leads in the case. If you have any information, call the Clark County Sheriff's Office.