PIERCE COUNTY, Wash. -- Volunteers from The Cor Deo School, Integrity Construction Group and Crime Stoppers of Tacoma-Pierce County spent the day building a wheelchair ramp at the home of a 10-year-old girl seriously injured in a hit and run last Saturday.  Katelyn Rogers was riding her scooter in front of her house in the 900 block of 113th Street South in Parkland when a dark colored 2004 to 2010 Mitsubishi Montero hit her and accelerated away.

"She went over the vehicle from the right side of the road to the left side of the road which is where she landed," said her father.  Aaron Rogers and his wife were in their front yard watching Katelyn when he saw the speeding vehicle.  "I looked over to tell her to stop.   She was on her scooter crossing the road and they plowed right into her," he said. 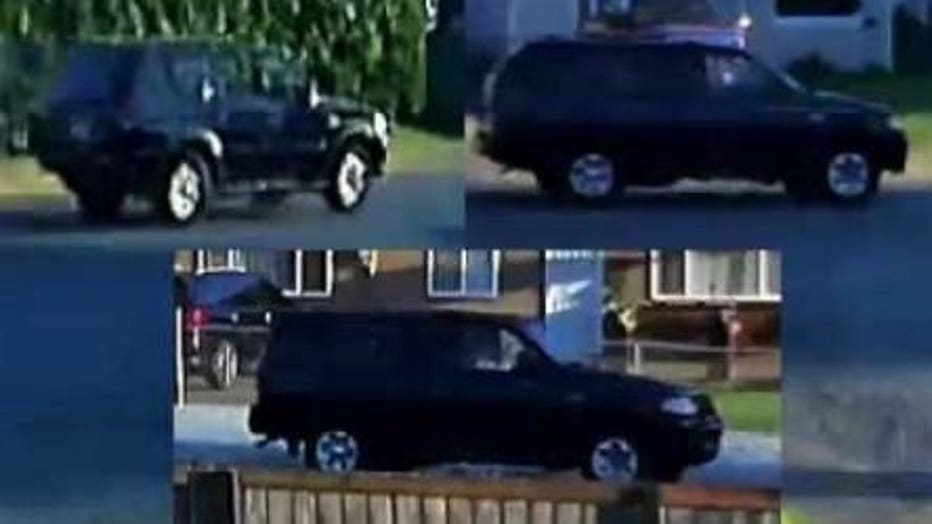 Katelyn suffered a broken femur, a broken shoulder and damage to her pelvis but amazingly suffered no brain injury.

"I'm just grateful she was wearing a helmet. If it wasn't for that helmet, this would be a completely different situation," said Rogers.

"It's her right leg that's broken and her left shoulder, so we can't really use crutches or anything. She's going to have to be in a wheelchair," said Rogers.

Just a few hours before she was hit, Katelyn was running track.  Rogers says his daughter is handling her injuries like a trooper but it is hard to see the pain in her eyes.

"I'm sure she'll heal and we're thinking a full recovery, but it could be several weeks, several weeks before she'll be able to walk again," he said.

They are grateful for all of the emotional and financial support they have received. A donation fund has been set up to help with their expenses while Katelyn recovers because neither parent has been able to work.  Their insurance deductible alone is a significant challenge.

Traffic Unit Investigators with the Pierce County Sheriff's Department were back out at the scene of the hit and run Wednesday taking measurements and photographs.  There are several half-inch deep grooves in the road where the SUV forced the scooter into the pavement before flipping Katelyn off to the side of the road.  Those measurements will tell detectives exactly how fast the Montero was speeding.

"They skidded when they saw her, hit her and accelerated and took off," said Rogers.

Deputies are also following up on every tip received from the public on a possible location of the SUV.

"There's gonna be some front-end damage obviously from the impact and then looking at the video, you can see that there are parts of the grill missing.  Maybe if somebody knows an individual like this, they've parked the car, they're not driving it now, just anything," said Det. Sgt. Gary Sanders.

So, is this driver a sociopath with no compassion or a normal human being who just made a mistake and is willing to come forward and apologize?

"They need to turn themselves in. They obviously need help. They've got to be on drugs or something to do something like that," said Rogers.

"At the time, initial fear of being caught, thinking about the punishment, intoxication. Sometimes people are intoxicated so they know they can get in trouble that way or it could be a chippy warrant," said Det. Sgt. Sanders.

He says they are looking at all of the registered owners of vehicles that match the descriptions but are hoping for a good lead from the public.
Crime Stoppers of Tacoma-Pierce County is offering a $1,000 cash reward for information that leads to an arrest in the case. You will remain anonymous. Call 1-800-222-TIPS (8477) or use the P3 Tips App on your cell phone to send photos of a vehicle or information to detectives. You can also go to www.P3Tips.com.