SEATTLE -- Ten counties in Washington have a chance to skip ahead to the second phase of the governor's reopening plan, weeks ahead of the rest of the state.

Gov. Jay Inslee made the announcement Friday during a press conference where he extended the state's "Stay Home, Stay Healthy" order through the end of May.

The counties in question have low coronavirus case numbers, have not had a new case in weeks and all 10 have not had a single documented coronavirus-related death. The counties are: Garfield, Columbia, Ferry, Pend Oreille, Lincoln, Wahkiakum, Skamania, Kittitas, Grays Harbor and Jefferson. 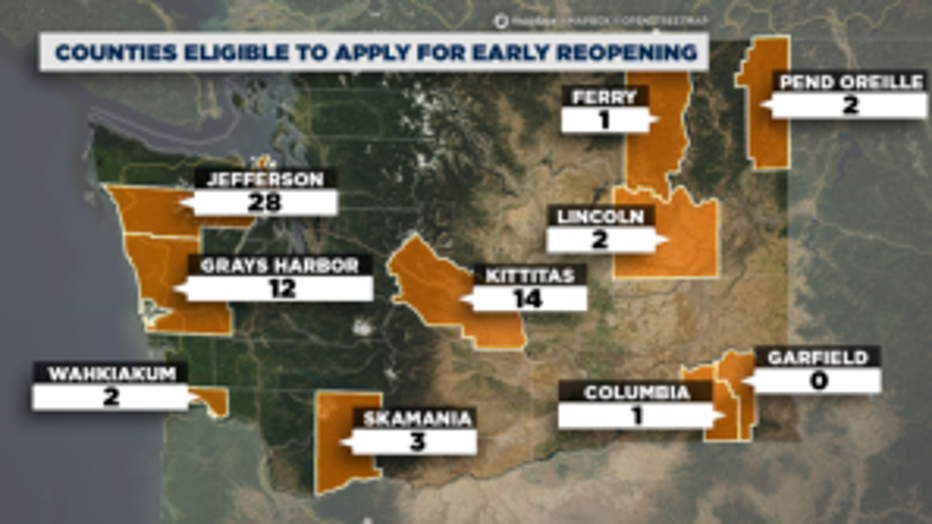 Ten Washington counties have the opportunity to apply to skip ahead to the second phase of the governor's reopening plan, weeks ahead of schedule. The counties range from zero to 28 documented coronavirus cases and have not had a new case in weeks.

Together, the combined populations make up less than 3 percent of the state population. But Inslee said Friday what we learn from these counties reopening can help larger counties or counties with higher case counts follow similar models.

In Ferry County, state Rep. Jacquelin Maycumber, R-Republic, said legislators came up with a plan four weeks ago to reopen and have been waiting for the governor to take action.

"We need to move forward," Maycumber said. "We've done everything we can with the health. We have checkpoints, we have testing available, we just haven't needed it. So allow us to start opening up our businesses again and let us keep going. Let us bring back the economic health to our area. We've done everything right from the beginning, we need a jumpstart now and really we fit all the criteria to do it tomorrow."

The governor said it would be a matter of days for these counties to get approval to move onto Phase 2, where new construction projects can start and restaurants and salons can open in a limited capacity.

To get approval, each county will need to submit a reopening plan to the state Department of Health that proves it has enough personal protective equipment and hospital capacity to move forward.

"Why do these counties have to apply to the state to ask permission to get their businesses reopened?" Republic Police Chief and Republican candidate for governor Loren Culp questioned. "Why does the state know better than the counties themselves?"

Culp argued that local leadership should be making the decision to reopen, not state leaders in Olympia. Especially on the eastern side of the state, leaders there have been advocating for a regional approach to reopening.

In April, State Health Officer Dr. Kathy Lofy expressed caution about allowing some counties to reopen earlier than others, citing travel between counties as a concern. Even in Phase 2, travel is limited to "within proximity of your home."

However, Maycumber said if Inslee is relying on certain data targets to achieve reopening, Ferry County should be further along.

"Ferry County, frankly, with zero cases, we should be at Phase 3, Phase 4 if you use those data points, so maybe by regionalizing it we can look toward moving that faster," she said.

The governor said in the next two weeks, he and the DOH will consider additional criteria for allowing other counties outside these 10 to apply for a variance, but that it'll be a high bar to meet. When asked about counties that do not get approval and move forward with plans to reopen in defiance of his orders, he reiterated that so far, counties across the state have complied with the stay-home order.

In California, the rural Modoc County said Friday that all businesses, schools and churches have the option to reopen, going against California Gov. Gavin Newsom's order, which is similar to Washington's. It's unclear if the state will take action against the county, which is tucked away in the northeast corner.

"That's what happens when you have someone in charge of the state government who oversteps their bounds and thinks that they're a dictator, you have people rebel," Culp said. "That's what's going to happen if Jay Inslee continues this charade of safety over something that has already pretty much run its course."

Health officials have credited the strict stay-home measures for depressing the number of COVID-19 cases in Washington state and have cautioned against a quick reopening. While some politicians have advocated for loosening restrictions and some law enforcement leaders have refused to enforce the stay-home order, these same elected leaders have not advocated for violating the order, but rather pressuring the governor to relax measures.

Since the coronavirus-triggered economic crisis began in early March, nearly 800,000 Washingtonians have filed for unemployment benefits, or about one in five workers in the state.