Many people arrive each night to admire the Riverside, California family's spooky Halloween decor, but the decorations appear so realistic that multiple people have made emergency phone calls to firefighters about the home.

NASHVILLE, Tenn. - An artist in Tennessee who first lost his business to a tornado and then again to the ongoing pandemic has created a Halloween sign that perfectly encapsulates how many people are feeling about 2020.

James Worsham’s yard features a giant sign that reads “2020, it was the scariest thing I could think of...”

Worsham runs Handy Dandy Productions in Nashville and is a sculptor by trade. Like many people in 2020, Worsham landed on hard times.

In March, a tornado destroyed his studio, and after four months of water damage, he said he was forced to close it down. He was able to relocate, but the economic devastation from the pandemic hurt his businesses prospects.

“I'm the kind of guy who tries to make jokes in hard times, to laugh my way through the worst of it,” he said, recounting the inspiration for the design. "I figured this would be a good way to own the fact that it's been hard, and hopefully make other people smile too."

And while his latest creation has drawn attention on social media, he said his neighbors haven’t paid it any mind. 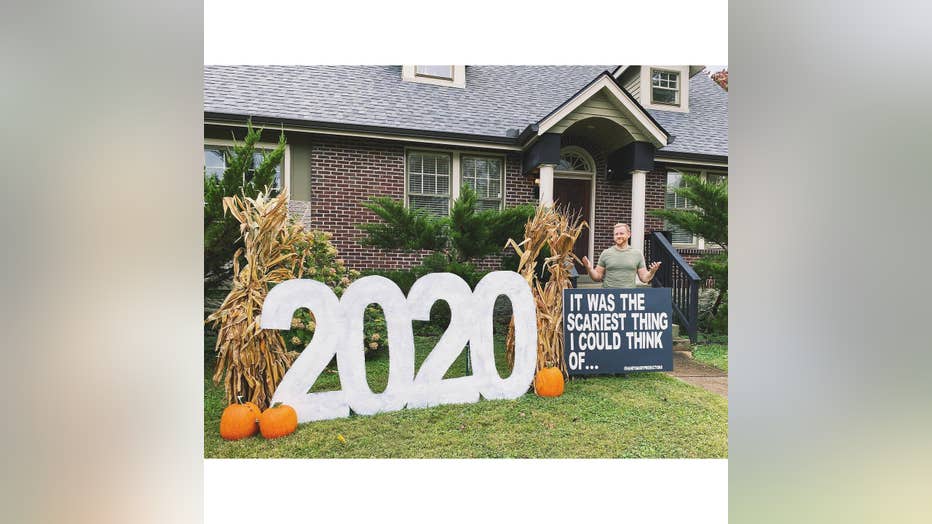 For Worsham, 2020 might be the scariest thing he could think of, but he says it has been a highly introspective time for him.

“I've learned a lot about myself, my family, and my country this year. Some great, some really not so great,” he said. “I think I'll look at this year the same way you look at falling off your bike, you've gotta pick yourself up, get back on, and go farther than you did the last time.”