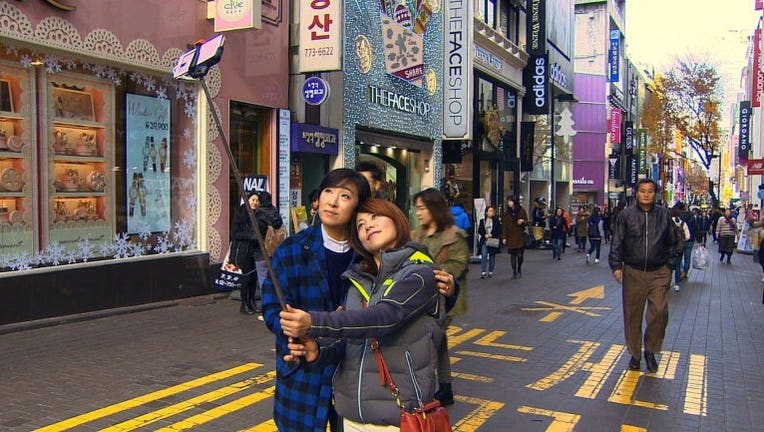 A couple in Hong Kong uses a selfie stick, a long pole used to extend their camera phone more than three feet away allowing a wide frame for the photograph.

LOS ANGELES -- Seriously, how is this not already huge in the United States?

According to The Daily Mail, selfie sticks are the must-have gift this season in Britain. The pole is used to extend camera phones more than three feet awa, thus allowing users to take group selfies, panoramic shots and the like. Thousands have already been purchased in the United Kingdom.

No surprise, given that 2014 is the year of the selfie -- at least, according to Twitter.

Selfie sticks first took off in Asia and, according to the Daily Mail, gained popularity among extreme sports enthusiasts who started using it as a way to capture images of themselves in action.

The Daily Mail reported that "The most basic is simply as extendable pole, meaning the selfie-taker sets the phone timer to take a picture. But more advanced versions from £14.99 have Bluetooth shutter releases on the handles which link to your smart phone, meaning you can control exactly when you take your picture."

It's that Bluetooth system that caused South Korean officials to ban the use of "unregulated" selfie sticks and to declare that they might be hazardous to other devices.

Liana Satenstein recently wrote about the device for Vogue under the headline "The #SelfieStick May Be the Most Shameless Fashion Accessory Ever."

"The selfie stick may seem solely for the extremely self-involved, but before you point fingers, or sticks, I'm not the only one using it," Satenstein wrote. "Look up #selfiestick on Instagram and almost 40,000 results of beaming couples and families holding the device appear."

One Twitter user posted, "I am now the proud owner of a #selfiestick," along with a pic of him and some mates.

Which begs the question: Is it only a matter of time before the trend hops the pond, given how few Americans have, ahem, selfie control?