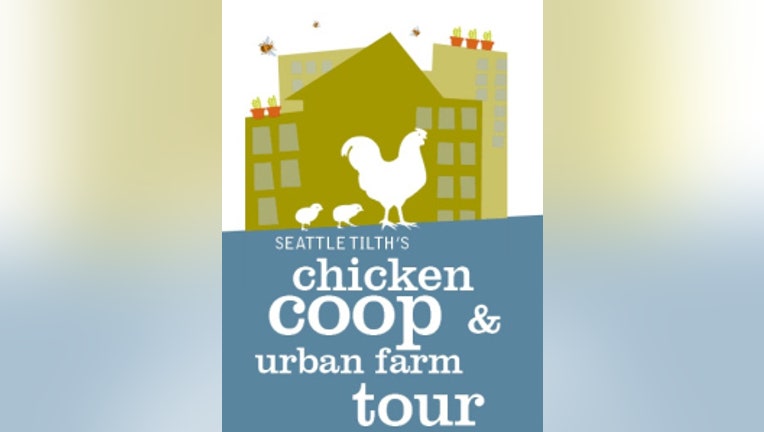 Save money and the planet at the same time! That's the message from one of Seattle's top gardeners. I got a behind the scenes preview of one of the 25 homes that will be showcased in the 2013 Seattle Tilth Tour of Gardens and Coops coming up this Saturday all around Seattle.

"You kind of have to keep scrap material around," says Ed Lambert taking myself and photographer Dante Jackson into the far back corner of his yard, behind the chicken coop.  He and Gretchen Siegrist have totally transformed their home in southeast Seattle into an urban oasis in the last 16 years.

Their chicken coop and three compost bins are all made of recycled materials. Potatoes are grown in bulap sacks reinforced with hoops of yard wire, raising the soil level so they can get maximum yield from the plants. The materials themselves can be used over and over again.

A patio umbrella where the top cloth was no longer useful has been transformed with twigs and branches into a work of art.  "Part of it is an artistic thing," says Ed, "and part of it is political."

In the front yard, wine bottles are used to create raised beds. No, Ed and Gretchen don't drink that much, they've collected empties over the years from recycling bins and after big social events. The dirt acts as mortar-- and if you want to try the trick yourself, you'll want to make sure the openings of the bottles are all pointing downwards. The retaining wall and steps at the very front of their house is made of demolished sidewalk reclaimed from a nearby light rail stop. Ed calls the material "urbanite". While very heavy, it's all free and all recycled-- and hopefully inspiring.

"Sharing stuff with neighbors-- and being able to help the community and be a community resource- whether it's sharing eggs and produce- or knowledge. And with climate change we’re all going to depend on each other in situations like that. Look waht happened with Sandy," Ed says. "People should get used to doing that, with neighbors helping neighbors as the world is changing."

Re-using materials, recycling, growing your own-- it's all part of an effort to go easy on Mother Nature. Ed says while most of the gardening was the effort and vision of Gretchen-- he'd have to say that getting rid of the grass was the hardest part. But, even that project was done environmentally responsibly. They used wood chips they got from area arborists after clean up on other people's dead trees. "They would just come and dump a truck load of wood chips periodically that we’d wheelbarrow back here," says Ed. "it makes great paths and you don’t have to mow it—which I really like."

Ed and Gretchen's place is one of the top 25 garden houses picked for this year's tour. Ed and Gretchen got this year's award for Most Frugal Gardener, due mostly to the amount of recycled material they've been able to use in their landscaping. The tour is this Saturday 7/13 from 10am to 4pm. Tickets are 12 dollars for adults, 5 bucks for kids. All the other info is on their website. http://seattletilth.org/learn/hotline/question-for-the-garden-hotline-1/special_events/chickencoopurbanfarmtour2013