WASHINGTON  — Ballerinas leaping to the strains of Tchaikovsky's "The Nutcracker" helped launch Christmas at the White House, featuring a traditional decor that Melania Trump chose for her family's first holiday season in the White House.

The first lady's theme is "Time-Honored Traditions," a nod to 200 years of holiday celebrations at the executive mansion.

"The decorations are up!" Mrs. Trump tweeted Monday morning. "@WhiteHouse is ready to celebrate! Wishing you a Merry Christmas & joyous holiday season!"

The White House at Christmas

The White House at Christmas

Among the new touches this year: On the outside, wreaths topped with red bows adorn every White House window. Inside, glistening wintry branches line both sides of an East Wing hallway that leads guests to a tree decorated with the Trump family's official Christmas ornament, a gold-toned bauble featuring the presidential coat of arms surrounded by a wreath of holly.

The first lady's office previewed the decorations for journalists on Monday before welcoming students from a nearby military base in Maryland to see the decorations and try some holiday-themed arts and crafts, such as building gumdrop trees and decorating garland.

"Are you the first lady?" asked one incredulous boy who then moved in for a hug. Classmates quickly followed for hugs of their own. 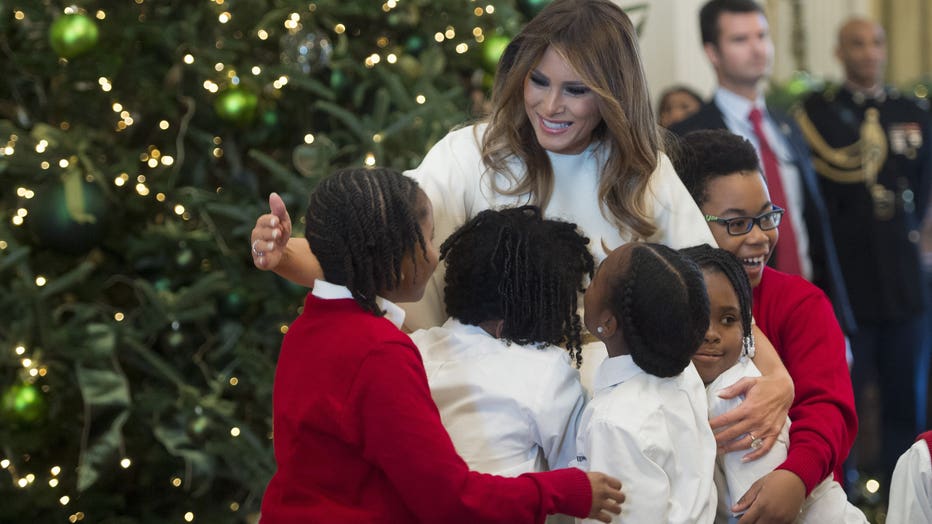 Wearing a winter white dress with cape-like sleeves and gold-toned heels, Mrs. Trump descended a staircase from the residence to the Grand Foyer and spent a few minutes taking in the ballerinas before she joined a group of children making paper wreaths and other decorations in the State Dining Room. The dancers echoed the first themed Christmas at the White House, Jacqueline Kennedy's "Nutcracker Suite" in 1961.

"Surprise," the first lady said as she later entered the Red Room, where handiwork with gumdrops was underway.

"So you want to show me how to do it?" she asked after sitting at a table with four students. A boy showed her how to make them.

The family Christmas card is framed and on display, along with cards from past presidents. "Merry Christmas and a Happy New Year," says the card signed by President Donald Trump, the first lady and Barron, their 11-year-old son.

That's a change from the Obama years, when the annual cards offered more generic sentiments of "Season's Greetings" or wishes for happy holidays. Trump has vowed to put "Christmas" back at the center of the holidays. During the presidential campaign, he complained that saying "Happy Holidays" instead of "Merry Christmas" amounted to "chipping away at Christianity."

Among the Christmas standards is an 18-by-6-foot (5.5-by-1.8-meter) Balsam fir from Wisconsin in the traditional spot in the Blue Room, decorated with ornaments bearing the seals of every state and U.S. territory. A separate tree near the East Wing entrance is dedicated to families that lost loved ones in the military.

The 350-pound (160-kilogram) gingerbread house in the State Dining Room offers a view of the White House from the South Lawn, with wreaths on every window and a U.S. flag flying from its sugary rooftop.

Jennifer Pickens, an expert on White House East Wing traditions, predicted that Mrs. Trump's window wreaths will become another tradition that no future first lady will want to end.

"Mrs. Trump's impeccable style is seen in the beautifully understated decorations and give a great nod to the First Families that came before them," Pickens said. 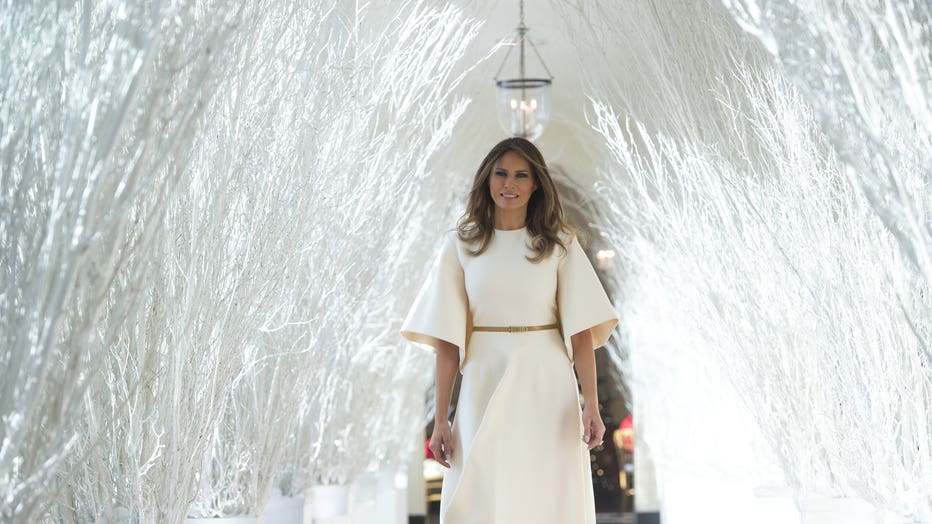 US First Lady Melania Trump walks through Christmas decorations in the East Wing as she tours holiday decorations at the White House in Washington, DC, on November 27, 2017. (Saul Loeb/AFP/Getty Images)

More than 150 volunteers from 29 states spent 1,600 hours over the holiday weekend decking the White House halls. The White House said Mrs. Trump chose every detail of the decor and did a final check late Sunday after returning from the family's Thanksgiving at their estate in Palm Beach, Florida.

The holiday celebrations get underway Monday with a party for the volunteer decorators and will continue into December with receptions and parties — sometimes two a day — for the next several weeks, including a party Friday for the news media. Trump regularly dismisses the media as "fake news," including in a tweet Monday.

More than 25,000 visitors are expected to tour the White House for the holidays and the kitchen is ready: 31,000 cookies have been baked, including 15,000 sugar cookies, many of which end up in purses for the trip home.

During President Barack Obama's final Christmas in office, larger-than-life replicas of family dogs Bo and Sunny greeted visitors in the East Wing. Fifty-six Lego gingerbread houses, one for each state and U.S. territory, were nestled in the branches of the trees that decorated the State Dining Room.