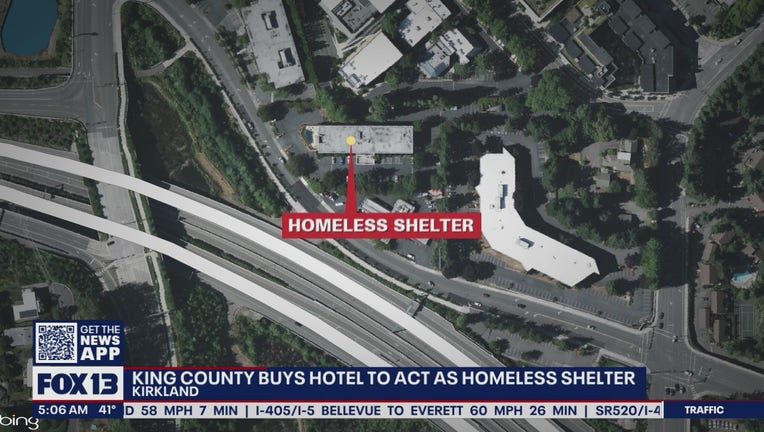 KIRKLAND, Wash. - Kirkland Mayor Penny Sweet issued an open letter to the community, as pushback continues against King County’s move to purchase a hotel and convert it into housing for homeless people.

On March 3, the county bought the former La Quinta Inn and Suites hotel on Northup Way.

The purchase adds to the county’s five properties in Seattle, Auburn, Federal Way, Redmond and Renton. People who use the sites will be connected to medical and mental health services and case management.

King County has officially purchased its 10th property to house those experiencing homeless.

Some in Kirkland are not enthusiastic about the decision, mainly for one reason: the former La Quinta is just a stone’s throw from several nearby schools including Eastside Preparatory School, Yarrow Bay KinderCare, Chestnut Montessori School and Cedar Crest Academy.

Opponents of the purchase argue there needs to be a buffer zone or barrier between the hotel and neighboring schools.

Parent-group "Keep Kids Safe" sued the City of Kirkland and King County in early April, alleging a lack of transparency and safety. Mayor Sweet responded at the time, saying the city was still reviewing the complaint.

On Monday, the city appeared to have finished its review.

"Upon review, the complaint is without merit. The allegations against the City that the Kirkland City Council did anything illegal or in secret are simply false. No violations of the Open Public Meetings Act occurred by any Kirkland City Councilmember," wrote Mayor Sweet. "We are confident that the court will dismiss these speculative, unfounded claims against the City."

Sweet said Resolution R-5522, outlining the terms of the County’s purchase of La Quinta, was made with input from the public, stakeholders and council members.

"We are disappointed that the plaintiffs in this case, by asserting without evidence that the City violated the Open Public Meetings Act, seem willing to jeopardize the confidence that Kirkland’s residents and businesses have in their City and its government," said Sweet.

As it stands, residents will start moving into the building in 2023.