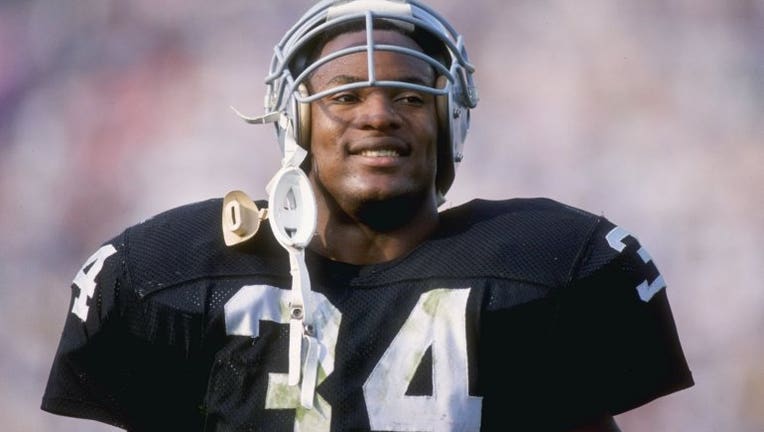 Running back Bo Jackson of the Los Angeles Raiders.

UPDATE: Seahawks will wear "MP" decal on their helmets Sunday in honor of Marysville-Pilchuck High School.

"In honor of Marysville-Pilchuck High School, the Seahawks will wear "MP" decals on their helmets and inactive players, staff and coaches will wear a "MP" lapel pin.

Fans are invited to sign oversize cards, staged in Touchdown City and at the north end of the West Plaza, to lend their support. The cards will be delivered to Marysville-Pilchuck High School next week.

A moment of silence will take place before the national anthem."

SEATTLE -- On Nov. 30, 1987, the Seahawks faced off against the Los Angeles Raiders on Monday Night Football.

Back then, it meant more to play the Raiders. They were AFC West division rivals, and the team carried a certain Je ne sais quoi that made them easy for Seahawks fans to dislike. Nothing specific exactly... just something. Maybe it was the team's fandom, as the Raider Nation came into being in the early 80s. Or maybe it was because the Raiders kicked the Hawks' butts in the 1984 AFC Championship, ending our last best chance at a Super Bowl ring until 2006. Most likely it was because the Raiders were the Hawks' division rivals, and 12s viewed them much like we view the 49ers or Cardinals today.

The Hawks had high hopes going into that cool Monday night. The team was 7-3 on the season, albeit playing some games with replacement players due 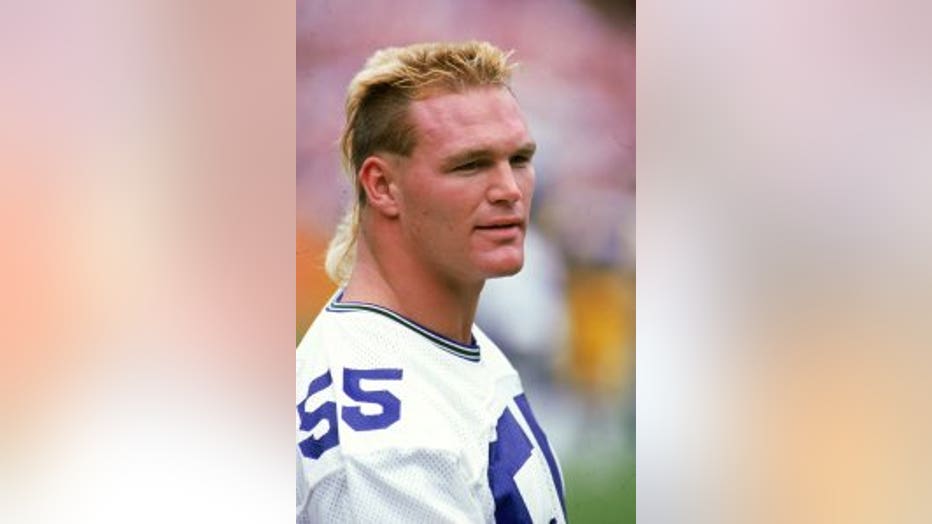 to a strike. Quarterback Dave Krieg looked more reliable than years' past. Thirty-three year old Steve Largent was in the midst of another Pro Bowl season. And the team's defense was buoyed by a young, cocky linebacker with slick hair named Brian Bosworth -- AKA "The Boz."

Yes, things looked set for a win against a 3-7 Raiders that had lost seven in a row and had a season in shambles. Set for a win, that is, until the Hawks ran into the 24-year-old leftfielder of the Kansas City Royals.

Not much can be said about Bo Jackson that hasn't already been said. He was a physical specimen. He was the subject of legends. He played professional football as a hobby.

Jackson, having already announced his devotion to Major League baseball, was drafted as a lark by the kooky Al Davis in the 7th Round of the 1987 NFL draft. He finished up his baseball season and joined the Raiders for his rookie year in Week 7 of the 1987 season.

He started slow, and failed to muster a

"He may not stop until Tacoma," Dan Dierdorf famously said. "He's gone."

100-yard game in his first four starts. Many wondered if Heisman Trophy winner from Auburn could carry the load of two sports, especially since he had taken so much time away from football. When the lights of the Kingdome clicked on late in that afternoon of Nov. 30, Jackson and the Raiders were a concern, but nothing the Hawks -- eager to make up for their Nov. 9 Monday Night Football loss at the Meadowlands -- couldn't handle. The Boz even publicly announced the team would be stopped, and he would stop Bo, the man who had the audacity to think he could play two professional sports.

Things looked up early on Monday night, with Kreig connecting to wide receiver Daryl Turner early in the 1st Quarter to put the Hawks up 7-0. But then, under that famous Kingdome scaffolding, Bo stole the show.

Jackson's first touchdown came early in the second quarter on a 14-yard pass from Marc Wilson. He was strong, tough. Faster than the Seahawks secondary.

In the 2nd Quarter, Bo took the ball on third down from the Raiders' own 9-yard-line. A simple sweep play, Bo broke free for a 91-yard touchdown run,  continuing past the endzone and into a dark Kingdome tunnel.

"He may not stop until Tacoma," Dan Dierdorf famously said. "He's gone."

Luckily for the Raiders, the team went into the tunnel to find Bo, who wasn't close to done. He continued to hammer the Hawks, including in the 3rd Quarter when Jackson ran right through Bosworth for a 2-yard touchdown run, a moment that may have signified the beginning of the end for "The Boz."

The touchdown put the Raiders up 34-7, and not even a late Krieg touchdown could bring the Seahawks back.

Bo finished the game with 221 yards on 18 carries, numbers that still stand as a Monday Night Football record. The Hawks couldn't stop Bo, hardly even once. As Dierdorf said at the end of his 91-yard run:

Why should you care about a Monday Night Football game from 1987? No reason, really. The above anecdote is nothing more than an interesting piece of Seahawks history and some cool YouTube videos.

Or maybeeeee... if we stretch here, the Bo Jackson game serves as an important reminder to 12s. Football games that are sure wins are not always so. Teams can lose seven in a row, be considered an underdog,  and one play or player can make all the difference. On a fall day under the dome or out in the October open at CenturyLink Field, every game starts at 0-0. The previous seven are the previous seven. The past is in the past, the only game that matters is the game in front of you.

Or perhaps it's too much of a stretch to head the Bo Jackson game as a warning. The Seahawks will play like the champions they are and safely contain the Raiders. They play every game like it's a championship game, and even a losing team is made up of professionals who can't be passed over. No, the Seahawks have planned for this game. It's not a gimme.

Even Bo knows that.

5 Reasons to watch the Seahawks game this weekend

5. Walter Jones induction to the Hall of Fame -- Offensive lineman Walter Jones will be inducted into the Seahawks Ring of Honor during halftime Sunday. The 11th member of the Ring, he'll join the likes of Steve Largent, Jim Zorn, Cortez Kennedy and many others. A first-ballot Hall of Famer, it's always great to see Jones on the turf at CenturyLink Field.

4. Richard Sherman interceptions -- Sherman doesn't have an interception this season, so he's due. Raiders Interim Head Coach Tony Sparano has said they won't shy away from throwing toward the Pro Bowl cornerback. Rookie quarterback Derek Carr will likely make at least one mistake, and Sherman will make him pay.

3. Marshawn Lynch -- After a week of rumors, look for the Hawks to settle more into their winning ways and give the ball 20-plus times to Marshawn Lynch. While Lynch doesn't necessarily have a standout game this season, he's a rhythm runner, and the more he gets the ball, the better he runs. If the Seahawks go up by a touchdown or two early, 25 runs by Marshawn Lynch isn't out of the question, giving him his second 100-yard rushing game of the year.

2. Derek Carr -- The Raiders' 0-7 record can hardly be blamed on rookie quarterback Derek Carr. Carr looked good against the Seahawks in the preseason, and has passed for more than 1,500 yards so far. He's a gunslinger, and if he gets rolling he might be able to make a game out of it. But an improving Seahawks pass rush and the Legion of Boom could make it a long week for the rookie from  Fresno State.

1. 12s and a potentially lopsided game -- 12s are hungry to get back to the Seahawks' winning ways at CenturyLink Field after a close loss to the Dallas Cowboys. If the Hawks come out strong, expect a deafening noise. What will be interesting is if the Hawks managed to get up by three or more touchdowns. How will the 12s respond? Continued enthusiasm or complacent, "bring on the next game" kind of attitude.

Kickoff is at 1:25 p.m. Sunday. Follow live updates on Q13FOX.com and watch Q13 FOX after the game for Seahawks Gameday, the official postgame show of the 12s.