In less than 72 hours, three people have been shot and killed in Tacoma, increasing the total number of homicides in the city to 23 for the year and one councilmember says enough is enough.

TACOMA, Wash. - In less than 72 hours, three people have been shot and killed in Tacoma, increasing the total number of homicides in the city to 23 for the year; and one councilmember says enough is enough.

In 2020, Tacoma faced its highest number of homicide in decades. This year, the city is seeing similar numbers. In less than 72 hours, there have been three fatal shootings.

Numbers presented to city council in August show 15 total homicides for the time period of January 1 to July 31.  In the last two months, there has been a spike. In just August and September, there have been 8 homicides—that is more than a 50% increase in comparison to the rest of the year.

"That’s just unacceptable. I think we need to, as a community, and certainly as a city councilman, I want to say enough is enough, and we need to do something about it," said Robert Thoms.

Thoms is a city councilmember in Tacoma.

It is not just increasing homicide numbers Tacoma is facing, the city has also dealt with high numbers of arsons, car thefts, and assaults.

Thoms, and several other councilmembers, drafted a letter earlier this year requesting more of a police presence in Tacoma.

"We’ve been below the size of an average police force since 2008," he said.

Data presented to council in August shows there were 16 vacant patrol officer positions with the department. There was also hiring freezes and staff reductions. 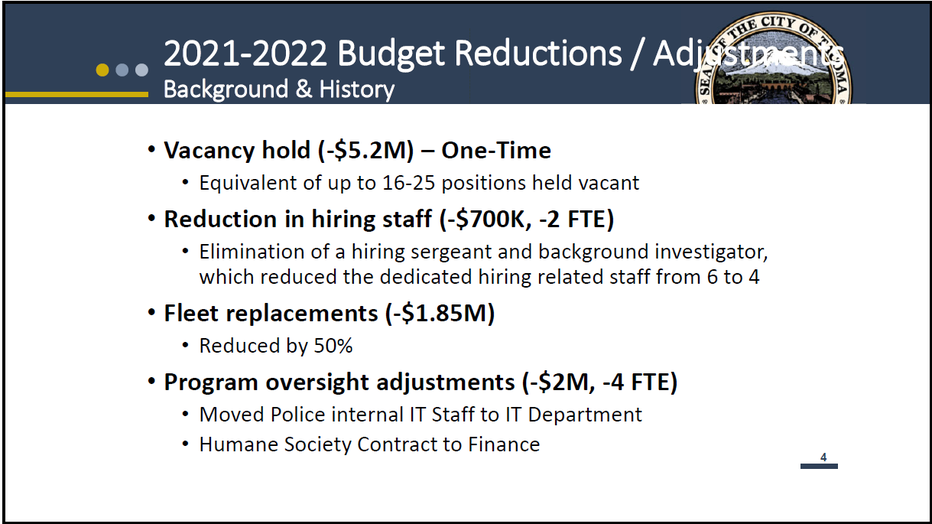 Thoms says he hopes to invest millions towards increasing the department’s presence with both officers and community service officers (CSOs).

"Maybe you have a police force that has these CSOs that don’t have weapons. I welcome that. I don’t think every time someone shows up they need to have a gun. But someone needs to show up. We have people that call police and won’t get a response for two-plus hours. Unacceptable," he said.

Thoms says budget talks will begin in the next few weeks.