Forecast models are coming into agreement that a storm system is set to impact the U.S. beginning on Thanksgiving and lasting into the weekend.

Nearly 55 million Americans will travel more than 50 miles this week as the U.S. prepares to celebrate Thanksgiving, and the FOX Forecast Center is tracking a potential storm in the East that could impact plans and travel for the upcoming holiday weekend.

So whether you're staying local or flying across the country, FOX Weather will keep you ahead of any trouble the weather may bring you.

What's the forecast for the day before Thanksgiving? 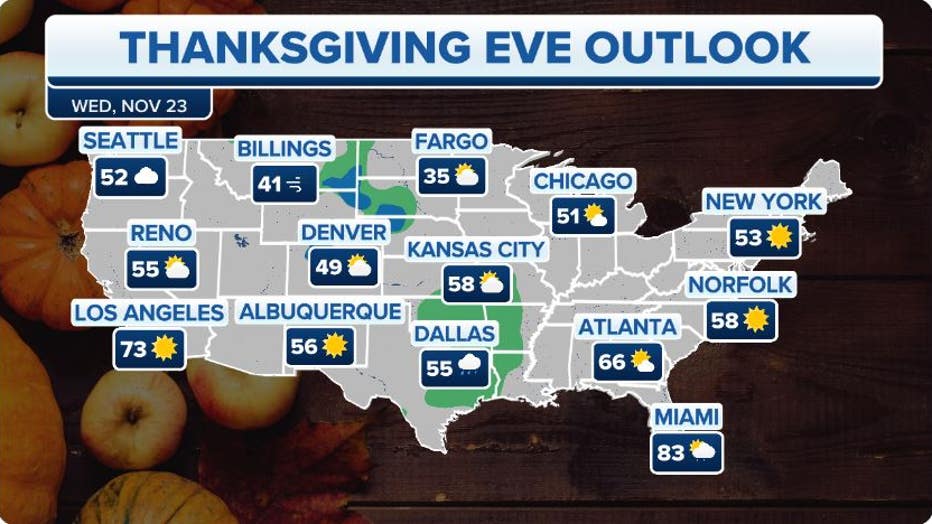 A look at the Thanksgiving forecast on Wednesday, Nov. 23, 2022.(FOX Weather)

Wednesday is shaping up to be a busy travel day, with millions of Americans hitting the road, catching a flight or boarding a train to get to their destinations before Thanksgiving.

It doesn't appear that the weather will be too much of an issue, and temperatures will be mild in many areas across the country.

In the Northeast, mostly sunny skies are likely for most areas. And temperatures will cooperate, with New York City likely reaching the lower 50s.

HEADING OUT OF TOWN THIS THANKSGIVING? YOU'LL BE AMONG THE 55 MILLION OTHER AMERICANS, TOO

Heading into the mid-Atlantic and Southeast, temperatures will likely be warmer. Norfolk, Virginia, could see a high temperature in the upper 50s, and Atlanta will reach a high in the mid-60s.

Miami will be the warm spot in the East, with a high temperature in the lower 80s and a chance of showers and thunderstorms.

Temperatures will be cooler in the northern Plains and Intermountain West, with Fargo, North Dakota, feeling a high temperature only in the mid-30s. In Billings, Montana, the temperature should be a bit warmer, with a high temperature in the lower 40s on Wednesday accompanied by gusty winds.

A partly to mostly sunny day is expected from Denver to Albuquerque, New Mexico, and temperatures should range from the upper 40s to the mid-50s in the afternoon.

And in the West, temperatures will range from the lower 50s in Seattle to the mid-50s in Reno, Nevada, but Los Angeles will be much warmer as highs climb into the lower 70s.

HOW WILL WEATHER IMPACT YOUR THANKSGIVING TRAVEL PLANS?

What's the weather forecast for Thanksgiving? 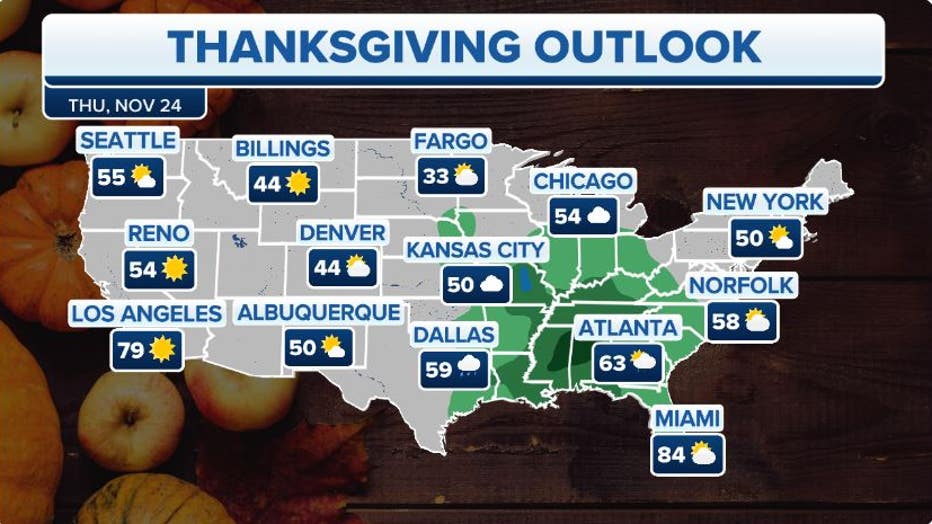 The FOX Forecast Center will be tracking a potential storm that could bring rain to areas from the Gulf Coast to the Southeast and north into the Ohio and Tennessee valleys on Thanksgiving Day.

Some snow is also possible on the cold side of the system, but the exact locations that might see snowfall remain uncertain at this time.

Temperatures will range from 50 to 55 degrees from Chicago to Kansas City, Missouri, while areas farther south such as Dallas could make a run at 60 degrees.

In the Northeast, New York City will see a high temperature of about 50 degrees with plenty of sunshine, which is excellent news for the thousands of people expected to line the streets to watch the Macy's Thanksgiving Day Parade.

Winds are expected to be light, which makes it much easier for the massive balloons to navigate city streets.

The western half of the country is expected to remain mostly sunny and dry on Thanksgiving, but some areas will have cold temperatures.

Fargo is expected to hover around the freezing mark, and Billings will see a high temperature in the mid-40s.

Highs should reach the mid-50s from Seattle to Reno, and Los Angeles will enjoy a high temperature near 80 degrees on Turkey Day.

What is the Black Friday weather forecast? 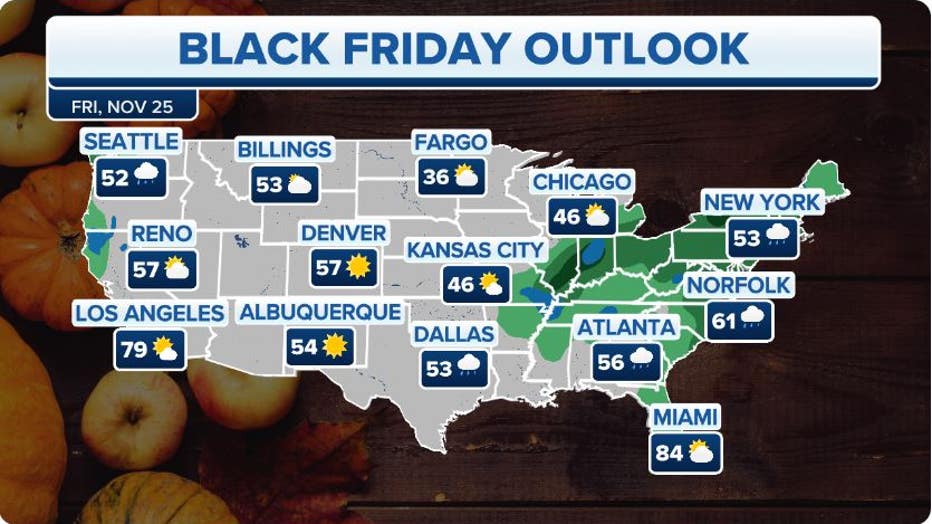 The FOX Forecast Center will continue to track the storm system as it moves across the central and eastern U.S., but many questions remain.

"The question mark is what happens on Friday," FOX Weather meteorologist Britta Merwin said. "Does that area of low pressure get caught up and kind of hang out in Texas, or does it quickly move out towards the East Coast?"

"That means we'll have some big-time issues when it comes to Friday," Merwin said. "Keep in mind, it's Friday. So we are about 4 to 5 days out, and we'll see some wiggle room with this forecast."

WHAT ARE THE WORST AIRPORTS TO FLY INTO DURING WINTER 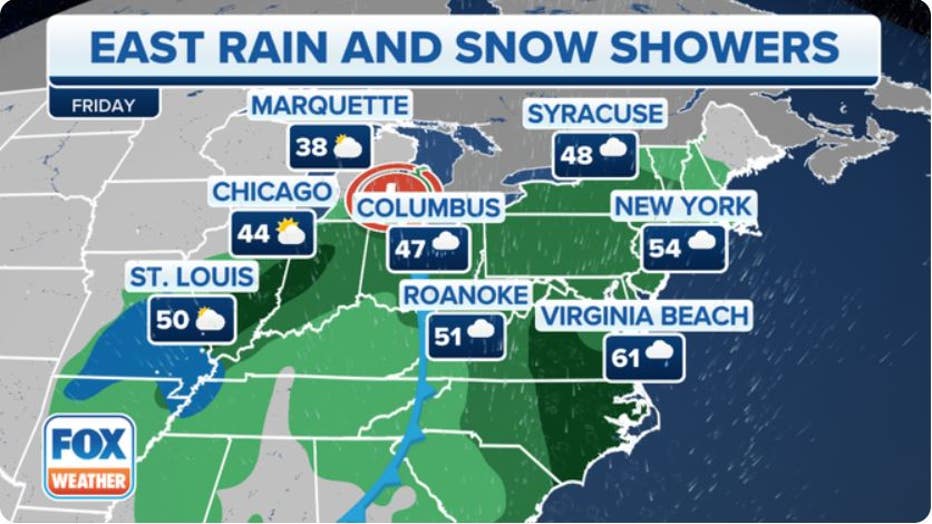 Heavy rain could be moving up the East Coast and along the Interstate 95 corridor on Black Friday.

One of the computer forecast models, the Global Forecast Systems (GFS), shows the storm system diving out of the Rockies on Thanksgiving Day and bringing inclement weather to Texas and along the Gulf Coast.

On Black Friday, the moisture could be lingering in Texas, but the FOX Forecast Center will keep an eye on how fast the system moves toward the East Coast and the Interstate 95 corridor.

"That could mean some issues for (Washington), D.C., and New York City as we go into Black Friday," Merwin said.

Black Friday could be a washout for shoppers in the Northeast and Midwest, but there are still a few days to fine tune the forecast.

What will the weather be on Thanksgiving weekend? 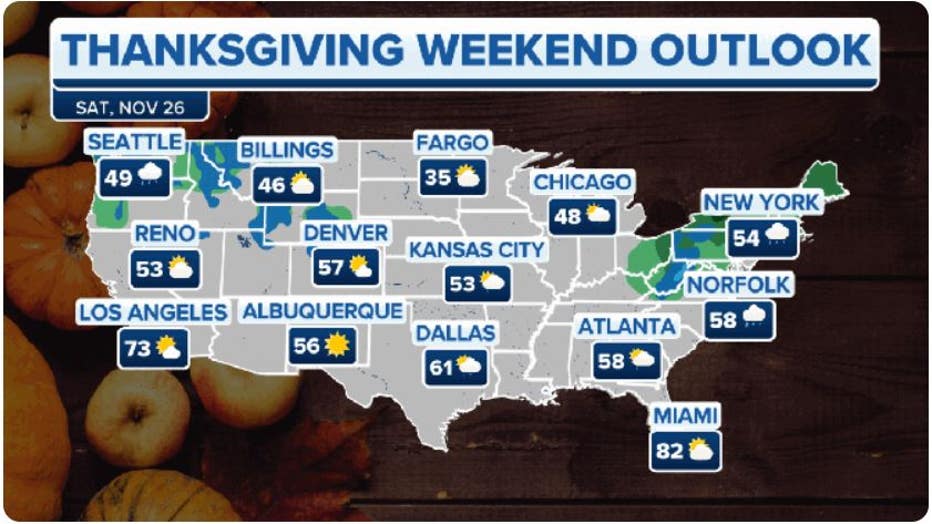 A look at the national forecast on Saturday and Sunday. (FOX Weather)

Many people will begin to head home after the Thanksgiving holiday over the weekend, and some trouble spots could impact travelers on Saturday and Sunday.

The storm system that the FOX Forecast Center will be tracking during Thanksgiving week could still affect weather conditions in the Northeast and New England on Saturday.

Rain is possible from New York City to Boston and northern New England, and temperatures will be in the mid-50s in many areas.

If you're headed home on Saturday in those areas, allow some extra time on the roads, and call your airline before heading to the airport to ensure flights are still on time.

Another storm system will be moving into the West and could bring rain to the lowlands and snow to the higher elevations.

On Sunday, the FOX Forecast Center will be keeping an eye on another storm system that could be moving into the central U.S. from the Plains to the Ohio and Tennessee valleys, extending into the Southeast and mid-Atlantic states.

Temperatures will range from the upper 40s in Chicago to the lower 50s in Kansas City and the lower 60s in Dallas.