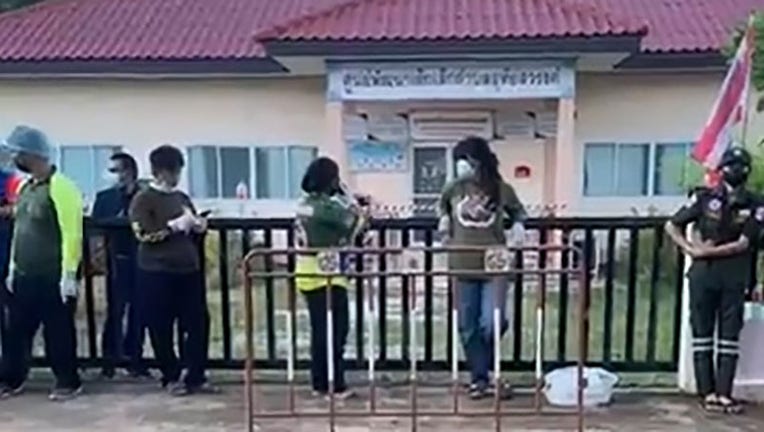 A screengrab from footage live-streamed on Facebook shows security services outside the cordoned-off entrance to the childcare facility in the northeastern Thai province of Nongbua Lamphu on Oct. 6, 2022. (Credit: Sribunruang Dragon Rescue via Storyf

UTHAI SAWAN, Thailand - A former police officer facing a drug charge burst into a day care center Thursday in Thailand, killing dozens of preschoolers and teachers and then shooting more people as he fled. At least 36 people were slain in the deadliest rampage in the nation’s history.

The assailant, who was fired earlier this year, took his own life after killing his wife and child at home.

Photos taken by first responders showed the school's floor littered with the tiny bodies of children still on their blankets, where they had been taking an afternoon nap. The images showed slashes to their faces and gunshots to their heads and pools of blood.

A teacher told public broadcaster Thai PBS that the assailant got out of a car and immediately shot a man eating lunch outside, then fired more shots. When the attacker paused to reload, the teacher had an opportunity to run inside. 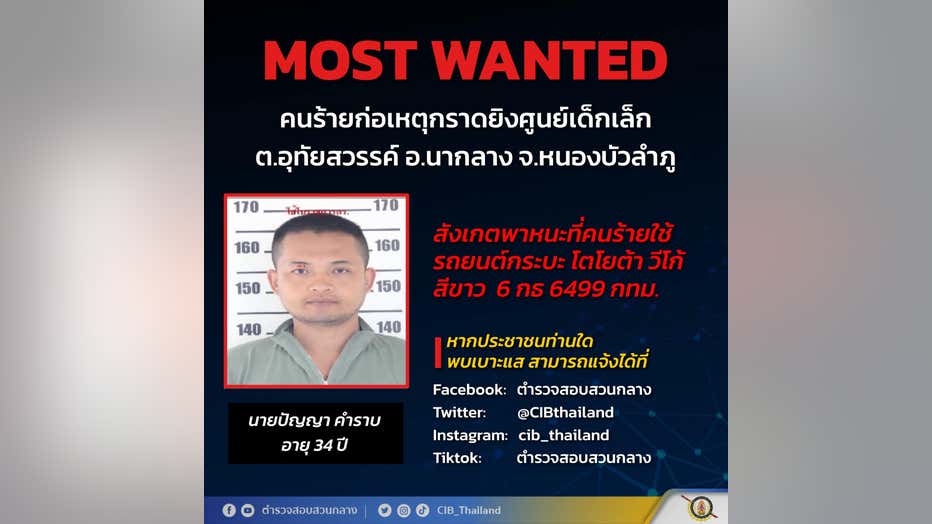 In a mug shot released by the Thailand Criminal Investigations Bureau, CIB, a suspected assailant is shown in the attack in the town of Nongbua Lamphu, northern Thailand, on Oct. 6, 2022. (Credit: Thailand CIB)

Another witness said staff at the day care center had locked the door, but the gunman shot his way in.

"The teacher who died, she had a child in her arms," the witness, whose name wasn’t given, told Thailand’s Kom Chad Luek television. "I didn’t think he would kill children, but he shot at the door and shot right through it."

The attack took place in the rural town of Uthai Sawan in Thailand’s northeastern province of Nongbua Lamphu, one of the country’s poorest regions.

A video taken by a first responder arriving at the scene showed rescuers rushing into the single-story building past a shattered glass front door, with drops of blood visible on the ground in the entryway.

In footage posted online after the attack, frantic family members could be heard weeping outside the building. One image showed the floor smeared with blood where sleeping mats were scattered around the room. Pictures of the alphabet and other colorful decorations adorned the walls.

Police identified the attacker as 34-year-old former police officer Panya Kamrap. Police Maj. Gen. Paisal Luesomboon told PPTV in an interview that he was fired from the force earlier this year because of the drug charge.

In a Facebook posting, Thai police chief Gen. Dumrongsak Kittiprapas said the man, who had been a sergeant, was due in court Friday for a hearing in the case involving methamphetamine, and speculated that he may have chosen the day care center because it was close to his home.

Earlier, Dumrongsak told reporters that the main weapon used was a 9mm pistol that the man had purchased himself. Paisal said he also had a shotgun and a knife.

Thailand Prime Minister Prayuth Chan-ocha, who planned to travel to the scene on Friday, told reporters that initial reports were that the former officer was having personal problems.

"This shouldn’t happen," he said. "I feel deep sadness toward the victims and their relatives."

At least 30 people have died after a gunman opened fire at child care center in Thailand on Thursday.

Police have not given a full breakdown of the death toll, but they have said at least 22 children and two adults were killed at the day care. At least two more children were killed elsewhere.

Some family members of those killed in the attack were still at the scene of the rampage late into the evening. Mental health workers sat with them, trying to bring comfort, according to Thai TBS television.

Mass shootings are rare but not unheard of in Thailand, which has one of the highest civilian gun ownership rates in Asia, with 15.1 weapons per 100 population compared to only 0.3 in Singapore and 0.25 in Japan. That’s still far lower than the U.S. rate of 120.5 per 100 people, according to a 2017 survey by Australia’s GunPolicy.org nonprofit organization.

The country's previous worst mass shooting involved a disgruntled soldier who opened fire in and around a mall in the northeastern city of Nakhon Ratchasima in 2020, killing 29 people and holding off security forces for some 16 hours before eventually being killed by them.

Nearly 60 others were wounded in that attack. Its death toll surpassed that of the previously worst attack on civilians, a 2015 bombing at a shrine in Bangkok that killed 20 people. It was allegedly carried out by human traffickers in retaliation for a crackdown on their network.

Last month, a clerk shot co-workers at Thailand’s Army War College in Bangkok, killing two and wounding another before he was arrested.