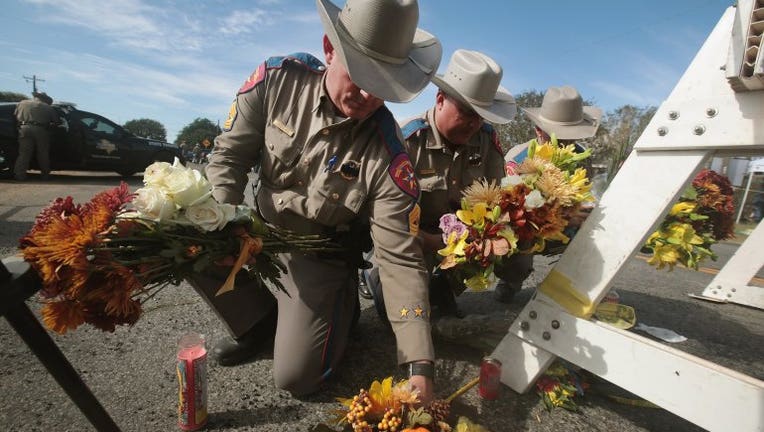 Police move flowers placed at a barricade near the First Baptist Church of Sutherland Springs on November 6, 2017 in Sutherland Springs, Texas. Yesterday a gunman, Devin Patrick Kelley, killed 26 people and wounded 20 others when he opened fire durin

Gun-rights supporters have seized on the Texas church massacre as proof of the well-worn saying that the best answer to a bad guy with a gun is a good guy with a gun. Gun-control advocates, meanwhile, say the tragedy shows once more that it is too easy to get a weapon in the U.S.

To no one's surprise, many Americans on opposite sides of the gun debate are using the latest mass shooting to reaffirm their opinions about firearms, drawing very different lessons from the rampage that left 26 people dead.

The bloodbath is proving to have elements both sides of the gun debate can use: Dozens were killed, from babies to the elderly. The slaughter took place in a house of worship. The killer had a history of domestic violence that legally should have prevented him from buying his guns. And a National Rifle Association member pulled out his own rifle and wounded the killer, helping to end the danger.

"Both sides are following the respective scripts that we have seen many times before," said Robert Spitzer, chairman of political science at the State University of New York at Cortland and an expert on firearms and Second Amendment issues.

On Sunday, Devin Patrick Kelley, 26, traveled to a Baptist church in Sutherland Springs and opened fire with a Ruger AR rifle with a 30-round magazine, going from aisle to aisle as he shot parishioners. He killed himself after being shot and chased down by a church neighbor.

Kelley was able to buy the rifle and three other weapons even though the former Air Force man was convicted at a court-martial of choking his wife and cracking her son's skull and was given a bad-conduct discharge in 2014. It turned out the Air Force did not submit his criminal history to the FBI database that is used to conduct background checks for gun shops.

President Donald Trump, a longtime supporter of the gun lobby and the first president since Ronald Reagan to address the NRA, said the attack was the work of a mentally ill man.

He said that rather than use the shooting as justification to restrict access to firearms, it should be seen as a shining example of the benefits of gun ownership. If the neighbor who confronted the gunman hadn't had a rifle, Trump said, "instead of having 26 dead, you would have had hundreds more dead."

That thought resonated with gun owners around the country.

"There's an old saying: 'The best answer for a bad guy with a gun is a good guy with a gun,'" said Tiffany Teasdale-Causer, owner of Lynnwood Gun and Ammunition in Lynnwood, Washington.

"I get the emotional argument — let's ban all guns — but you're imposing a law on people who disobey the law to begin with," he said. "We are free men and women and we control our destiny. When seconds count, the police are minutes away. What do you do in those minutes? Do you hide under a table or do you retain your right to protect yourself?"

But Stephanie Ervin of Civic Ventures, an advocacy group in Seattle, said having more guns in public settings such as stadiums is "a recipe for tragedy" and increases the risk of something bad happening.

The problem of mass shootings won't be solved "by grandmas bringing guns to church in their handbags," she said. "It will be resolved by introducing and passing more laws that keep people from accessing firearms in a moment of crisis."

Since Trump's election, gun-rights advocates are feeling emboldened for the first time in nearly a decade, while gun-control activists fear the unraveling of restrictions on firearms.

At the top of the gun-rights agenda is winning passage in Congress of "national reciprocity," which would allow concealed-carry gun permits issued in one state to be valid in all others. The gun lobby also wants an easing of restrictions on silencers.

With each mass shooting, gun-control advocates have seized on the events to point to what they see as failings or loopholes in the law.

When a gunman in Las Vegas slaughtered 58 people last month in the deadliest mass shooting in modern U.S. history, there was talk of outlawing "bump stocks," the device he used to enable his semiautomatic rifles to fire like fully automatic weapons.

For Sandy Phillips, each mass shooting brings back memories of when her daughter was killed in the 2012 movie theater attack in Aurora, Colorado, that left 12 people dead. Phillips, a gun owner who lives in Texas, bristles at the good-guy-with-a-gun argument.

In the Texas rampage, "they didn't even succeed in killing him. He killed himself," Phillips said. "The bottom line is people are killing people with guns and they're killing them in large numbers because we have easy access to guns."