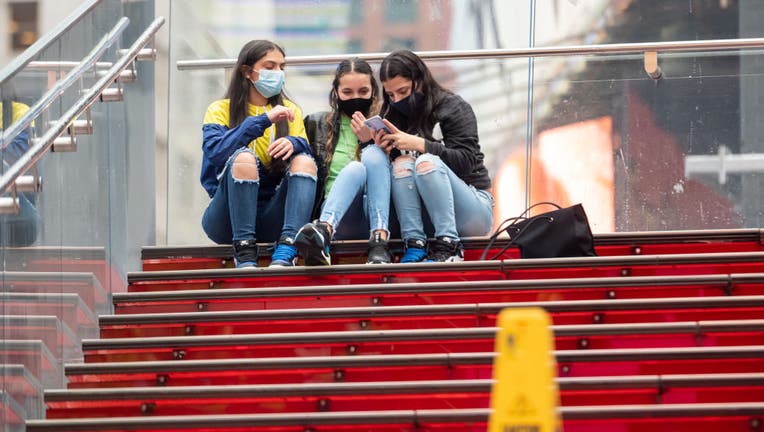 NEW YORK, NEW YORK - OCTOBER 28: People wear face masks on the red steps in Times Square as the city continues the re-opening efforts following restrictions imposed to slow the spread of coronavirus on October 28, 2020 in New York City. The pandemic

What may be considered to be a no-brainer to parents — a new study suggests that the brain activity of teenagers starts to change and tune out their parents’ voices, opting to listen to more unfamiliar voices instead.

Stanford University School of Medicine researchers recently published their findings on April 28 in the Journal of Neuroscience.

They believe that around the age of 13, developing brain activity tends to make a mother’s voice no longer unique to her teenage children. That’s compared to when children are much younger and more open to listening to their mothers.

RELATED: Prediabetes rising among US adolescents and teens, study finds

Participating teenagers listened to several repetitions of the nonsense words from their mother and the two unfamiliar women in random order. They then identified their mother’s voices, which they accurately selected 97% of the time.

Teen with down syndrome allowed to graduate

Emily Pennington and her mother spoke with FOX Television Stations about the journey it took for the teen to be able to graduate despite her age.

The teens then underwent an MRI and listened again to the voice recordings as well as household sounds such as a dishwasher running. This allowed researchers to see how their brains responded to voices compared to other non-verbal sounds.

RELATED: Stressed out: 4 in 10 women have reached their ‘breaking point,’ survey says

However, teenagers had greater brain activity from hearing unfamiliar voices compared to their own mothers’ voices. Researchers said this tended to happen with the participants who were between 13 and 14 years old, with no difference between boys and girls.

"Just as an infant knows to tune into her mother’s voice, an adolescent knows to tune into novel voices," said lead study author Daniel Abrams, Ph.D. in a Stanford article. "As a teen, you don’t know you’re doing this. You’re just being you: You’ve got your friends and new companions and you want to spend time with them. Your mind is increasingly sensitive to and attracted to these unfamiliar voices."

Researchers hope their findings will aid in studying the brain activity in autistic teenagers and how they respond to different voices and other social stimuli.

The current study builds upon previous research from Stanford that shows the brains of children 12 years and younger have a unique response when hearing a mother’s voice.

"A child becomes independent at some point, and that has to be precipitated by an underlying biological signal," said the study’s senior author, Vinod Menon, PhD, the Rachael L. and Walter F. Nichols, MD, Professor and a professor of psychiatry and behavioral sciences. "That’s what we’ve uncovered: This is a signal that helps teens engage with the world and form connections which allow them to be socially adept outside their families."