LOUISVILLE, Ky.  -- Labor Day is usually a time of leisure, carefree barbecues and lounging by the pool. But a Kentucky, teenager spent the holiday feeding the homeless, and one small act of his that day is inspiring people around the world.

LaRon Tunstill was with a group of volunteers handing out soup and hamburgers to homeless people when a man sitting on the corner sparked his interest.

"You could tell like he's been hurt so many times," Tunstill told CNN affiliate WAVE.

The 14-year-old started a conversation with the man and noticed his tattered shoes.

"The soles were completely gone," said Jason Reynolds, founder of PurpMe, the nonprofit Tunstill was working with that day. "His toes literally touched the ground." 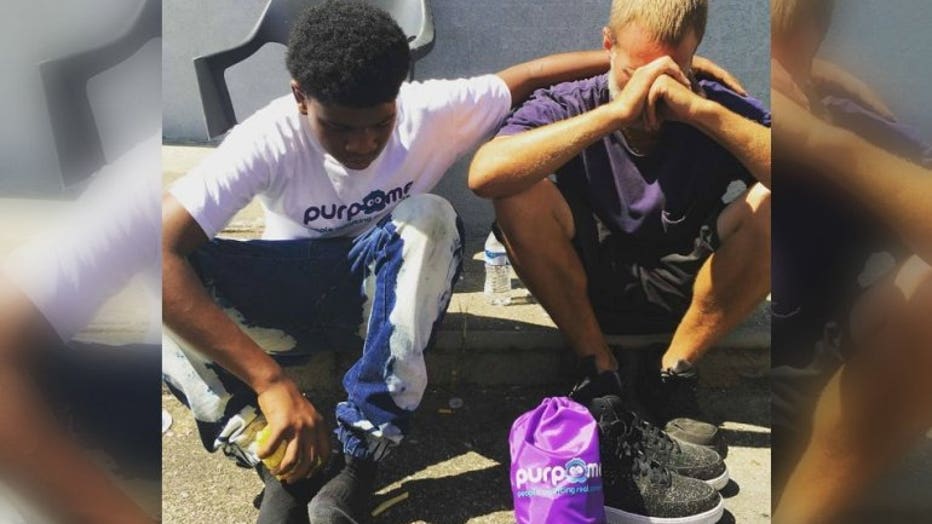 LaRon Tunstill comforts a man after giving him his new shoes. (PurpMe)

What the teen did next was unthinkable.

Without hesitation, Tunstill took the brand new Nike Air Jordans off his feet and handed them to the man. He had owned the sneakers for only a day.

"At first he was like 'no I can't take these because these are too expensive.'" Tunstill told WAVE. "I told him, 'take it' because it's what God wanted me to do." Overwhelmed with gratitude, the man began to pray. That's when Reynolds captured an image that has now been viewed online more than a million times.

The photo shows the man's head bowed over clutched hands while Tunstill's arm hovers over him in comfort.

The man appeared emotional in a video posted on PurpMe's Facebook page.

"That's crazy how one person and another person can be completely different," he said in the video before his thought trailed off in silence.

"It was life-changing to see that powerful moment," said Reynolds, still in awe of the exchange. "Just a year before, he (Tunstill) was getting into trouble and now you see that he's changing."

Crime surrounds Tunstill in the rough part of Louisville where he lives. At one point, Reynolds feared the young man was headed down the wrong path.

"Every day we see shooting. Kids robbing people, kids breaking in and vandalizing. It's a lot right where we live," Tunstill's mother, Camille Carter, told WAVE.

"He used to get in a lot of trouble when I first met him," said Reynolds. It wasn't until Tunstill joined PurpMe that his life geared in another direction.

PurpMe was designed to help young people discover their purpose through encouragement. Reynolds said the nonprofit served as a vehicle for Tunstill to give his shoes away.

When Tunstill came home that day, his mother admits she was displeased to see him shoeless.

"At first I was upset because we just bought these shoes a day ago for him for school and then I just realized that's what God told him to do," said Carter to WAVE. "I'm very proud."

Since then, a donor bought new shoes for Tunstill. Reyonlds created a GoFundMe page to support the PurpMe movement. One-hundred percent of funds raised will go to help children in the Louisville community.

"I always tell the kids one simple act is all it takes," said Reynolds. "Maybe you can't change the world but you can change someone's world."