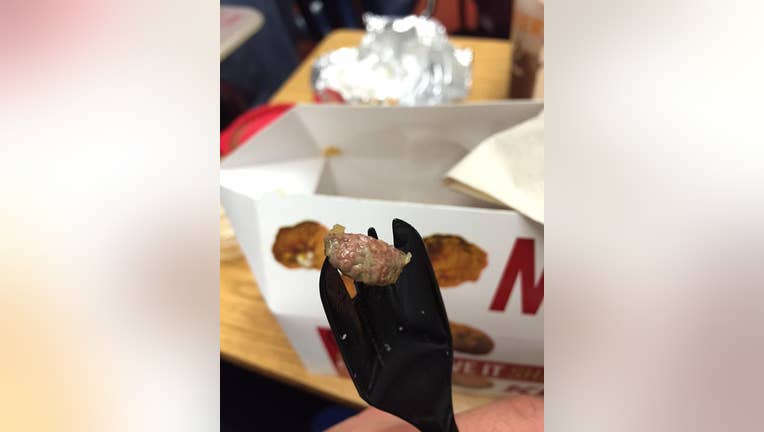 This is the chicken organ that teenager Manuel Cobarubies found his KFC meal. He thought it looked like a chicken brain. (Photo: FOX40/Sacramento)

STOCKTON, Calif. (FOX40) -- A Stockton, Calif., teenager found what he believed to be a chicken brain in his fast food meal at KFC.

“(It looked) like a brain to me. I mean at that point, red flags were kind of raised,” teenager Manuel Cobarubies, a Stockton High School student, told FOX40 in Sacramento Monday.

He explained he found what looked like a brain alongside his chicken breast, thighs and corn.

“I ended up spitting it in the trash can because I get grossed out by that,” he said.

So the teen tweeted at KFC for an explanation.

That tweet made the Internet rounds 226 times. He said KFC did contact him but other than a quick sorry he did not hear back as of Monday morning. All he wanted was a refund.

“As far as what I paid for my meal because I mean my meal didn’t sit too well with me. I think that might be it.”

So FOX40 tweeted KFC and called their corporate headquarters. Hours after the tweet made the rounds, Cobarubies said he got a call from Richard Ramos, a KFC area consultant.

Ramos said the "brain" is actually a kidney or a gizzard and is safe to eat. The teen said he got what he wanted -- his lunch money back. But he may not be returning for a chicken meal anytime soon.

“I’m probably just going to have to start packing my own meals, making my own sandwiches.”