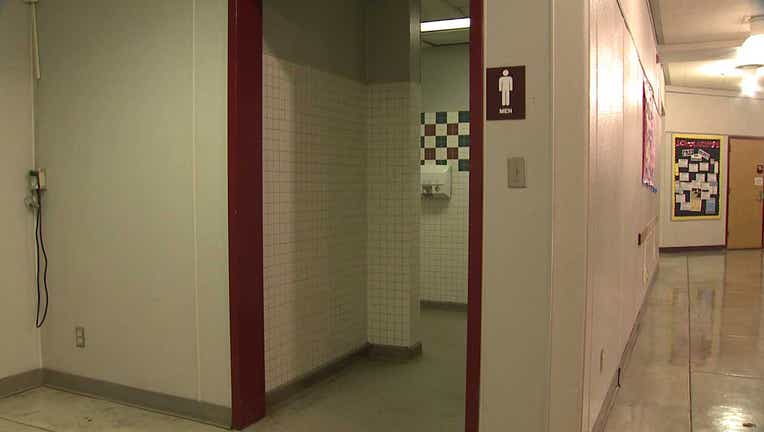 MOUNTLAKE TERRACE -- A 16-year-old Mountlake Terrace High School student is recovering after an attack in a restroom at school.

"I went into the bathroom, there was blood everywhere," said student Jake Gaskill.

A student was attacked inside the men's room, punched so hard it could be weeks before he returns to class.

Schwab described the victim as a good student with a learning disability.

Tuesday's beating left the teen with a broken jaw, missing tooth and cuts to his face.  The 16-year-old was rushed to the hospital for surgery.

"An assault like this, when it is purely an attack that results in a serious injury, I can say in my 25 years this is the first time that has ever happened," said Schwab.

The boy's wallet was allegedly taken in the attack but later recovered.

"From what I've heard, he buys his friends lunches if they don't have money," student Amanda Holthusen said of the victim.

The alleged attacker, 18-year-old senior Darian Sharpe, was arrested and charged with assault and robbery. He  was immediately expelled from school.

Several students said they don't know why the senior may have targeted a younger student he didn't know.

"You would like to think this is a safe school. It really makes you question that, I can understand that. They (parents) are asking, Are my kids safe? I can ensure them that they are," said Schwab.

In the wake of the attack, the principal also had a message for his students.

"Kids in this school knew this was going to happen, I really believe that. I believe they had foreknowledge of that. We are always encouraging our students when they have information like this to come and let somebody know because we could have possibly prevented it," said Schwab.

Kurt Guihan, a friend of the victim, said the school is coming together to help with the victim's recovery.

"He is a nice kid. Everyone is getting ready to donate. We haven't donated yet but we are gathering money," said Guihan.

Many students and the principal say a violent attack like this is rare at Mountlake Terrace High.  The principal sent out letters to parents, hoping to mitigate their concerns, and he is encouraging anyone with information to come forward. The school is also investigating to see if any other students were involved.