More signs of delayed adulthood from the U.S. Census Bureau.

A report shows that right now, more than a third of younger Americans are living with one or both of their parents. That translates to about 24 million people aged 18 to 34. The Census Bureau also found out that more young adults lived with their parents that with a spouse.

Looking at this infographic provided by the bureau, it shows how these numbers have increased from 2005 to 2015. Washington state stayed the same, in the 20 to 30 percent of adult children remaining at home. The average more than a decade ago was 26 percent. That jumped to over 34 percent in 2015. 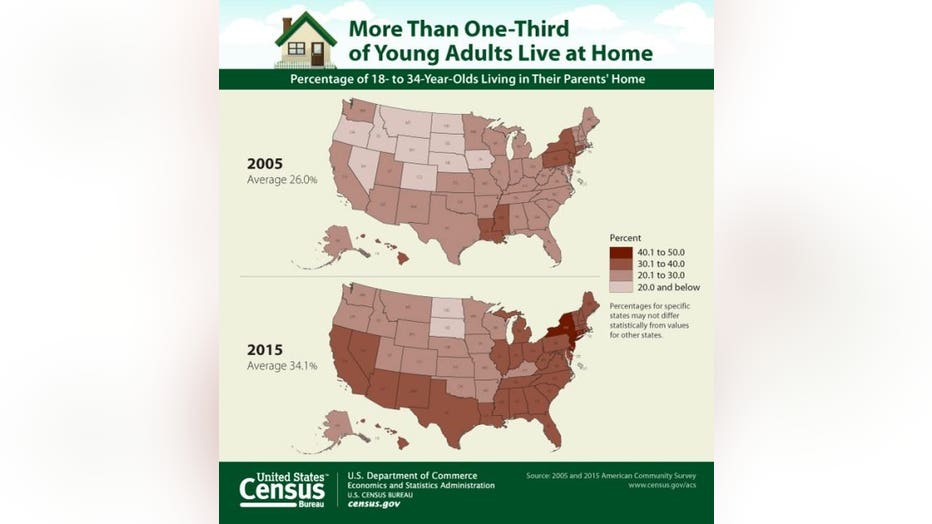 So why is this happening? William Singer, a mental health family counselor believes there are a number of factors:

Singer says that it used to be that someone could get into the workforce and work their way up into a great paying job. However human resources programs may be throwing out candidates because there is no human interaction with a candidate.

In Seattle, like many major metropolitan areas, the cost of living makes in difficult. Many young adults have trouble affording rents, let along buying a home.

“The bigger problem with socialization has to do with the world of computing,” said William Singer, Ph.D.

“They’ve actually taken themselves into a whole new world, a whole new universe which debilitates them, I think from functioning out there in the real world,” said Singer.

Hart Hodges, Economics Professor at Western Washington University says there are other factors at play here from the economy, how much money their parents make, and yes, technology to an extent.

“I think the idea is, the pieces reinforce each other,” said Hodges.

Affluence is one of those factors. Hodges points to Cam Marston, an expert on generational change. In a video, Marsden says that “in times of affluence, the youth remain younger longer. They stay at home longer, they have children at older ages, they get jobs at older .”

Professor Hodges says the 2008 recession very well could have played a part in delaying some kids from getting out on their own earlier.He also points to a longer life expectancy as a reason young adults may be putting off milestones like getting a career, getting married, even having children.

As for the technology piece of the puzzle, “I think technology enables a variety of behaviors. If I’m a kid today, I don’t have to think ahead and plan ahead the way I would have 20, 30, certainly more than that, years ago,” said Hodges.

For young adults, he says they need to take baby steps becaus, in some ways, they are still babies.

Best advice? Singer says to start at the computer. There are meet-ups happening around Seattle. He says find something you like, and meet people out in a group setting.

Hodges agrees on teaching more IRL skills. “Something as simple as, ‘I don’t have to learn how to change a tire on a car,’” said Hodges. Instead of planning ahead and learning the skill, kids today will simply “download a YouTube video and watch it.” He says failure to learn how to prioritize needs early could put them behind the eight ball later in life.

Here are some interesting facts from the Census Bureau about this new generation of young adults: