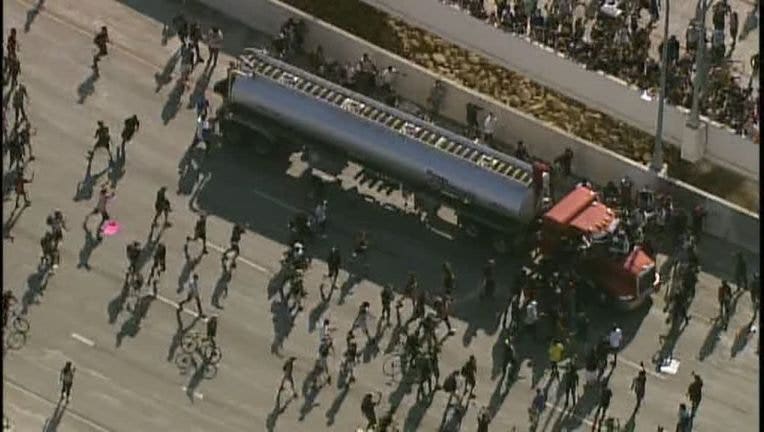 MINNEAPOLIS (FOX 9) - A large truck has barreled down an interstate as crowds of protesters packed the highway in Minneapolis.

FOX 9 Minneapolis crews saw medics rushing onto the highway toward some people who may have been struck by the semi. At this time, FOX 9 is unable to confirm if anyone was hit.

A crowd of people then mobbed the truck and tried to get at the driver.

The march, which started just after 4 p.m. Central Sunday, departed the stadium and headed into downtown toward the Hennepin County Government Center. The group will move across the Hennepin Avenue Bridge, down University Avenue and onto Interstate 35W.

Thousands of people are expected to take a knee at three locations: U.S. Bank Stadium, the Hennepin Avenue Bridge and 35W.

Chauvin was seen in a video kneeling on George Floyd’s neck as Floyd repeatedly says “I can’t breathe.” The officer continued to press his knee onto Floyd’s neck even after he lost consciousness. None of the other officers at the scene attempted to check on Floyd until after the ambulance arrived, despite bystanders’ pleas.

His death has sparked national outrage.

According to the charges, Lane and Kueng responded to the initial 911 call from Cup Foods about a customer using counterfeit currency. They located Floyd in a nearby vehicle and, after some resistance, removed him from the vehicle and handcuffed him.

Chauvin and Thoa eventually arrived on the scene. The officers made several attempts to get Floyd into the squad car, but he resisted.

The charges say Floyd began saying and repeated that he could not breathe while he was still standing outside the squad car.

Chauvin pulled Floyd out of the squad car and he went down on the ground, still handcuffed. Kueng held his back and Lane held his legs while Chauvin pressed his knee onto Floyd’s neck.

Floyd told the officers “I can’t breathe” multiple times and repeated said “mama” and “please,” but the officers did not move from their positions.

At one point, Lane asks, “Should we roll him on his side?” and Chauvin says no. The body camera video shows Floyd eventually appear to stop breathing or speaking. Kueng checked his pulse and found none, but none of the officers moved until the ambulance arrived a few minutes later.

Chauvin had his knee on Floyd’s neck for a total of eight minutes and 46 seconds, including for two minutes and 43 seconds after Floyd was non-responsive, the charges say.