TACOMA, Wash. – A bulletin obtained by Q13 News shows alleged Tacoma shooter Bruce Johnson II was on a safety watch list by Tacoma Police Department in the weeks leading up to Officer Jake Gutierrez’ death. The bulletin cites an incident from November 15th, 2016 when Johnson reportedly impersonated an officer at Tacoma Mall.

Johnson is said to have walked into Tacoma Mall wearing a hat that read “SHERIFF,” with a rifle bag over his shoulder and handcuffs on his belt. The bulletin describes how Johnson was confronted by mall security and asked to leave, saying his “hostile behavior was unacceptable.”

Johnson is said to have purchased a cup of coffee before exiting the mall. The bulletin said while leaving, Johnson grabbed his crotch and said, “See, see what they are doing to me?”

Tacoma police were alerted to the incident and stopped Johnson a short time later, read the bulletin. An unidentified officer found an unloaded 20 gauge Mossberg rifle in the front seat of his vehicle. The officer asked Johnson why he was impersonating an officer, according to the bulletin, Johnson replied that he liked police and wanted to fit in with law enforcement.

According to a court order obtained by Q13 News, by carrying a rifle Johnson was in violation of a 2015 order of protection. Johnson was ordered to surrender or destroy any weapons until his next court date in August 2017. 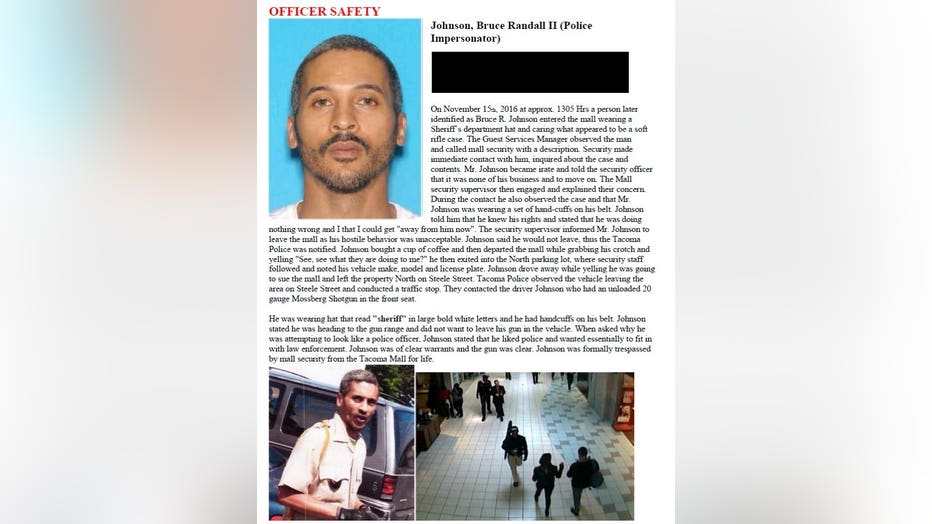