The Tacoma Police Union sent a letter to city leaders stating the most recent crime data presentation was misleading and far from the truth.

TACOMA, Wash. - The Tacoma Police Union sent a letter to the city council and police chief, claiming the most recent crime data presentation was misleading and far from the truth.

On Nov. 1, Tacoma Police Chief Avery Moore presented data to city council which paints a hopeful picture for the future of the city.

This year, Tacoma has seen the most homicides on record.

Over the last three months, the police department has placed an emphasis on 16 high-crime areas.

During the presentation to council, Chief Moore said violent crime—murder, robbery, aggravated assault—is down 37% in those areas.

However, the Tacoma Police Union president says this information is misleading to the people who live in the city.

"That is just not what the community is feeling," said Henry Betts, the president of The Tacoma Police Union IUPA Local 6."If you say violent crime and homicides are down, but you have a record-breaking [year] for homicides being the most ever since we’ve been tracking it. Those two things can’t be true at the same time."

Betts also says the discussion regarding response times was misleading.

During the presentation, Chief Moore stated the emphasis on the 16 high-crime areas did not affect priority calls for service.

Betts says priority calls make up a small percentage of calls for service. He says the majority of 911 callers are waiting far too long for responding officers.

"Those response times are really not acceptable. And the community is seeing that. We're late to get to a lot of these other basic calls, but they are still calls that are a big deal to the victim of it," he said.

According to police, incidents that had multiple offenses—like a robbery and murder—were only counted as one incident. 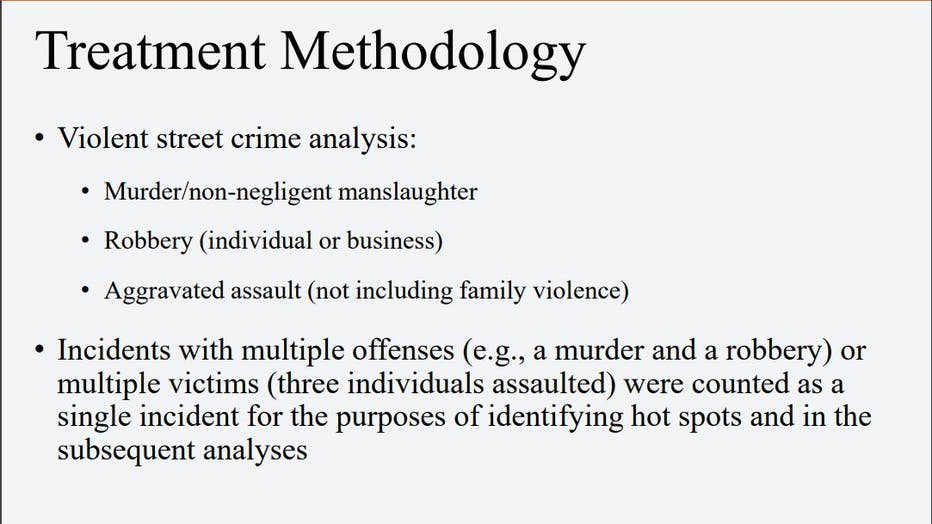 Betts also says he has concerns how shootings, where there is no target or injury, are not counted in the analysis.

FOX 13 News reached out to Tacoma Police to see if Chief Moore was available to comment on this letter, but he has not responded.

"Tacoma Police Department leadership recently presented to the City Council an update on violent crime in the City of Tacoma. That update was widely covered by the local media. The Officers, Detectives, and Sergeants represented by the Tacoma Police Union Local 6 interact daily with the community that is experiencing unprecedented crime in our City. For us, the real message was lost in TPD’s presentation. TPD’s artificially narrow focus on statistical improvements in crime rates in specific locations misleads the public into believing crime is down citywide. That is far from the truth.

"The truth is that our City continues to be victimized by crime at unacceptable rates. The truth is that we have suffered another record year for homicides, with seven weeks still left to go in the year. The truth is that many business owners continue to eat the financial losses from being property crime victims. The truth is the community, and particularly our most vulnerable neighborhoods, are still experiencing entirely too many shootings, aggravated assaults, drive-by shootings, shots fired, or whatever phrase we wish to use to describe bullets being indiscriminately fired throughout our City. The truth is that when officers report to work, they commonly face 50 or more pending 911 calls and this crushing demand for police services leads to the inevitable truth of delayed response times.

"TPD leadership should not hide from the truth. TPD leadership should be completely transparent and comprehensive in its answers to the Council’s and community’s questions about crime. The truth is often an uncomfortable reality. Hiding behind selective statistics does not change the experience of our community—an experience that is unacceptably riddled with crime. Two examples bear noting.

"First, there was more to the story when Chief Moore answered Councilmember Olgy Diaz’s question regarding response times by indicating that priority call response has not changed.

"In reality, Chief Moore’s answer was narrowly focused only on Priority 1 calls, which are less than 2% of TPD’s 2022 call response. That left 98% of Councilmember Diaz’s question unanswered. The complete answer is that TPD officers prioritize the highest acuity calls for service—the Priority 1calls—and continue to drop everything else to address those calls as quickly as they can. But for the other 98% of calls, TPD continues to struggle with timely responses; the call load is simply too much for our current TPD staffing levels, resulting in delayed responses to the community’s requests for police assistance.

"Second, Local 6 wholeheartedly agrees with Councilmember Kiara Daniels when she correctly identified that it is a big deal to the community when an unoccupied home is struck by gunfire. Her comments came in response to the parlor trick by TPD leadership to reclassify shooting incidents to "vandalisms" under certain criteria. It is wildly misleading for TPD to simply rename a problem with the hope that it disappears by getting lost in the statistical mix. Renaming and reclassifying when bullets fly indiscriminately into a home does not change the fact that our community was shot up. Our community does not want us to play games by renaming a problem; our community wants us to fix the problem.

"We acknowledge the importance of TPD having a crime plan. Indeed, Local 6’s members have gone above-and-beyond in implementing Chief Moore’s crime plan, and we will continue to do so. But our solutions must be based in honest dialogue about the scope of the problem, the viability of crime plans and solutions, and the current status of the implementation of those plans and solutions. For instance, we must be honest that TPD’s crime plan is not the only answer. The solution also requires an open and willing jail partner, proper police staffing, support from City Hall, and legislative fixes to ensure that crime victims are prioritized ahead of criminals.

"Our community demands transparency and accountability in all that TPD does. TPD must be open and transparent about the status, results, and limits of its crime plan. Whether by responding to calls for service or by participating in solutions-oriented discussions, Local 6’s members will continue to be part of the solution. We all have the same goal: to make Tacoma a safer City."